Crews are reporting crashes on I-90 in Spokane County and highways throughout eastern Washington during Friday's snowstorm. 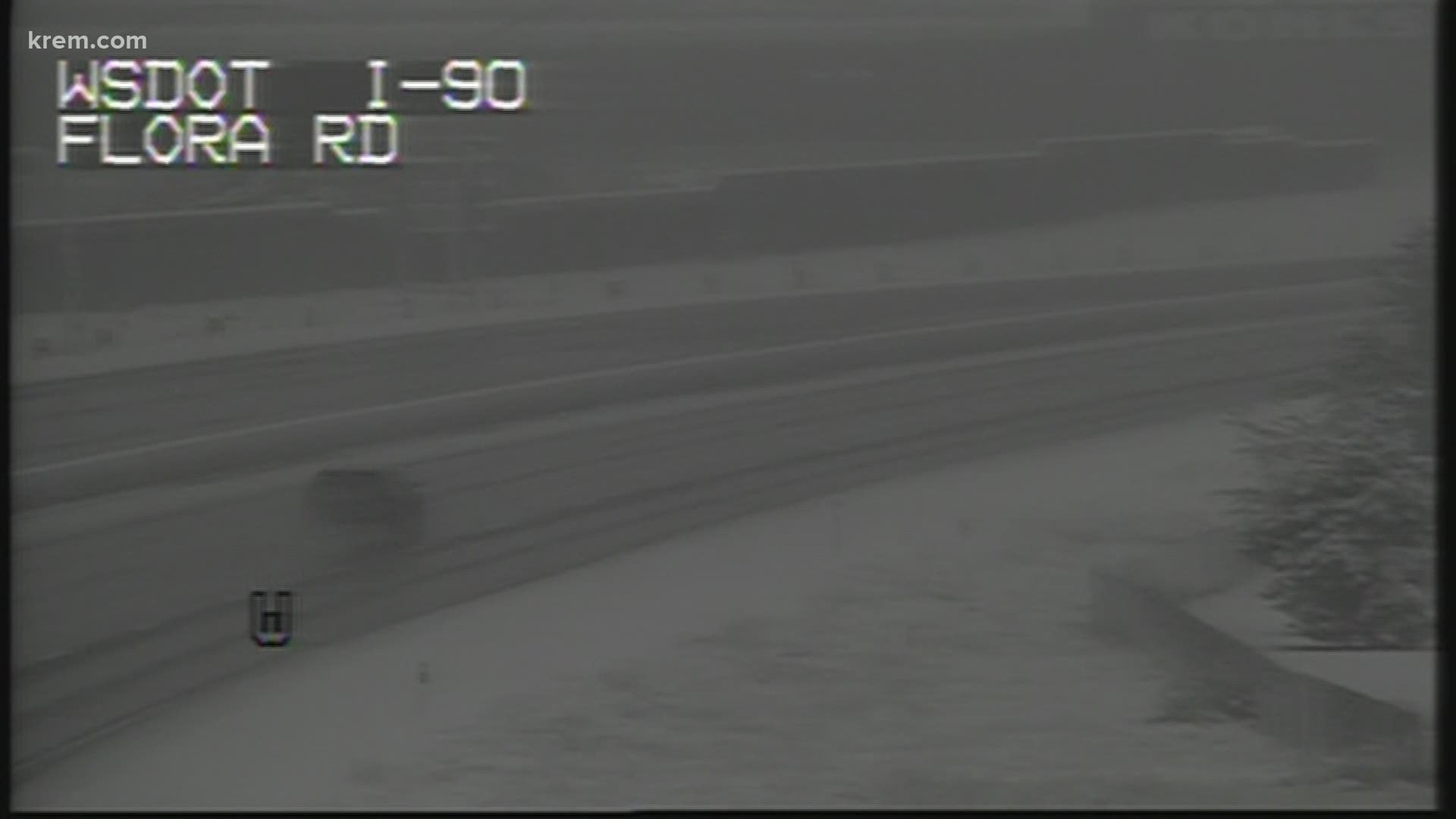 SPOKANE, Wash — Hatch Road has reopened in Spokane from 57th Avenue to Highway 195 amid the season's first snowfall on Friday.

This comes as multiple crashes have been reported throughout Spokane County.

Some of the busiest areas for Washington State Patrol troopers include the West Plains and North Spokane, according to Trooper Jeff Sevigney.

The following road closures around Spokane have been announced as of 1:10 p.m. on Friday:

Power lines down near I-90 on ramp

Avista crews are on-scene near the I-90 on-ramp at Fifth Avenue and Maple Street due to downed power lines.

A tree has fallen and blocked southbound traffic at 7th Avenue and Thor Street in Spokane, according to KREM's Regina Ahn.

Multiple cars are reportedly off of the road and in roadside ditches along Highway 395 in north Spokane County.

Crashes reported on I-90 in Spokane County, North Idaho

The first crash happened around 10 a.m. on eastbound I-90 between Sullivan and Flora Road. According to Washington State Trooper Jeff Sevigney said three cars were involved in the crash, including another state trooper. Sevigney said the trooper's car was hit during a traffic stop on the left shoulder of the highway.

Sevigney said the trooper had to be extricated from his vehicle. He said the crash was not snow-related. Only one lane is open in, causing long delays in the area.

An unknown number of people were injured in the crash, according to Sevigney. The injuries were not life-threatening.

RELATED: WSP trooper extricated from patrol car after crash on I-90 in Spokane Valley

Two crashes were reported on I-90 over Sunset Hill just before noon on Friday. One of the incidents is in the middle lane of westbound I-90 just before the Highway 2 interchange, while the other is on eastbound I-90 at the merge point of Highway 2.

It is hard to see due to visibility on the camera but there are now two incidents on I-90 on Sunset Hill in Spokane. One is WB I-90 just before the US 2 interchange in the middle lane, the other EB I-90 at the merge point of US 2 onto EB I-90. Please slow down and use caution. pic.twitter.com/Ii0B1hp6fl

The Washington State Department of Transportation reported shortly after noon that a vehicle that had spun out and was facing the wrong direction on westbound I-90 near the Broadway Avenue interchange.

We now have a vehicle that has spun out and is facing the wrong direction on westbound I-90 near the Broadway interchange. The vehicle is on the shoulder near the left lane. Traffic is slowing down through the area. Please use caution. pic.twitter.com/0h4nGh2t0X

WSDOT said at about 11:30 a.m. that northbound SR 25, north of Davenport, was closed due to snow and several crashes. Only local traffic is being permitted through the area.

WSDOT also reported around 10:30 a.m. that snow was starting to stick just south of Deer Park on Highway 395.

Around 11 a.m., WSDOT advised traction tires should be used when driving over Sherman Pass/SR 20.

WSDOT has plow and deicer trucks out in the snow. They ask that drivers use caution and to give truck drivers plenty of space.

The Idaho State Police tweeted at 1:15 p.m. on Friday that multiple semi-trucks had spun out on both Fourth of July and Lookout passes.

The ISP said to expect delays and that chains are required on Lookout Pass.

State Highway 41 is closed at the Spirit Lake Cutoff Road in Idaho due to multiple crashes, according to the ISP.