Both directions of I-5 are reopen at JBLM after a fleeing SUV hit several emergency vehicles early Monday morning. 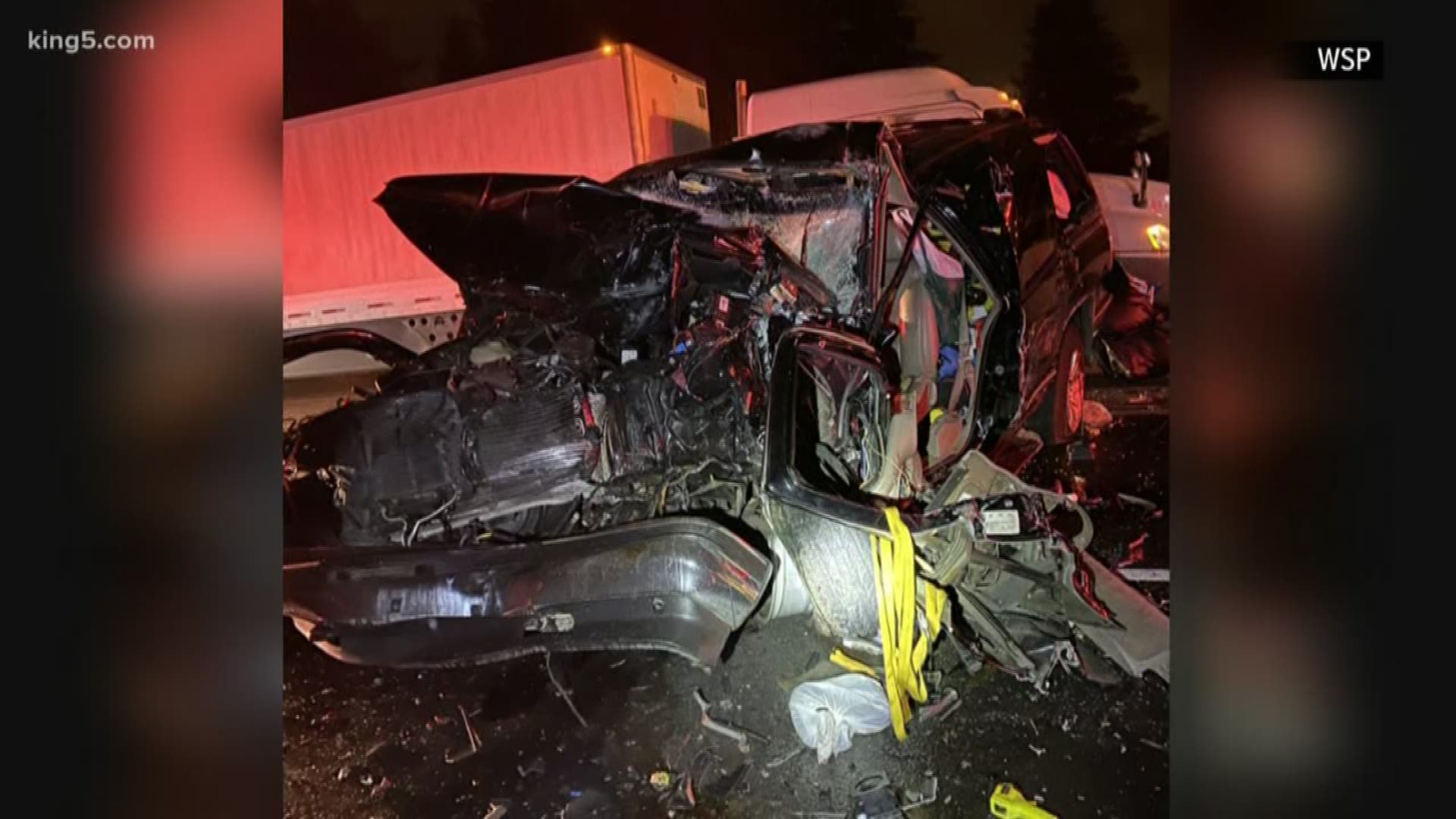 LAKEWOOD, Wash. — The northbound lanes of I-5 are back open in Lakewood after a series of incidents that blocked traffic for hours Monday morning.

All northbound lanes were closed for more than five hours and didn't fully reopen until 2:50 p.m. Traffic in both directions of I-5 near JBLM remains heavy for the Monday evening commute.

The incidents involved a semi truck fire, police pursuit, collision with several emergency vehicles, and injuries to two people and a dog.

The traffic mess started around 1:45 a.m. Monday when a semi truck caught fire on I-5 near Berkeley Street in Lakewood at milepost 122. The fire apparently started in the cargo area of the truck, which was hauling Cheesecake Factory shrimp and cheesecake, according to Washington State Patrol Trooper Ryan Burke.

Several agencies responded to the semi truck fire, including WSP, the Washington State Department of Transportation, and local fire crews.

Then a separate incident ended with a collision at the scene of the semi truck fire.

Around 3:05 a.m., the Thurston County Sheriff's Office started pursuing an SUV after the driver fled during a traffic stop. Twice, deputies joined and ended their pursuit of the SUV.

When deputies learned there was slowed traffic near JBLM, they called off the pursuit for good. However, the Chevrolet Tahoe continued on northbound I-5.

When the Tahoe came upon the scene of the semi truck fire at 3:50 a.m., it slammed into two fire trucks, a WSDOT Incident Response truck, a patrol car, and a civilian vehicle, according to WSP Trooper Johnna Batiste.

A WSDOT worker narrowly escaped injury when the suspect SUV ripped off the door of the worker's truck.

WSDOT spokesperson Doug Adamson said the worker had just stepped out of his truck and then dove back in after seeing the Tahoe speeding towards him without any headlights on. The employee was shaken up, but only suffered minor injuries from jumping back into his truck.

Credit: WSDOT
An SUV crashed in several emergency vehicles on northbound Interstate 5 in Lakewood on Nov. 18, 2019.

WSP Trooper Burke said the most damage in the crash was to one of the responding fire trucks. Traffic control was in place, but the SUV "came through, even with a coned off area," Burke said.

The driver and passenger in the suspect SUV were taken to the hospital with serious injuries. A dog was also in the suspect SUV at the time of the crash, according to Burke. The dog is in stable but critical condition at the Pierce County Humane Society. 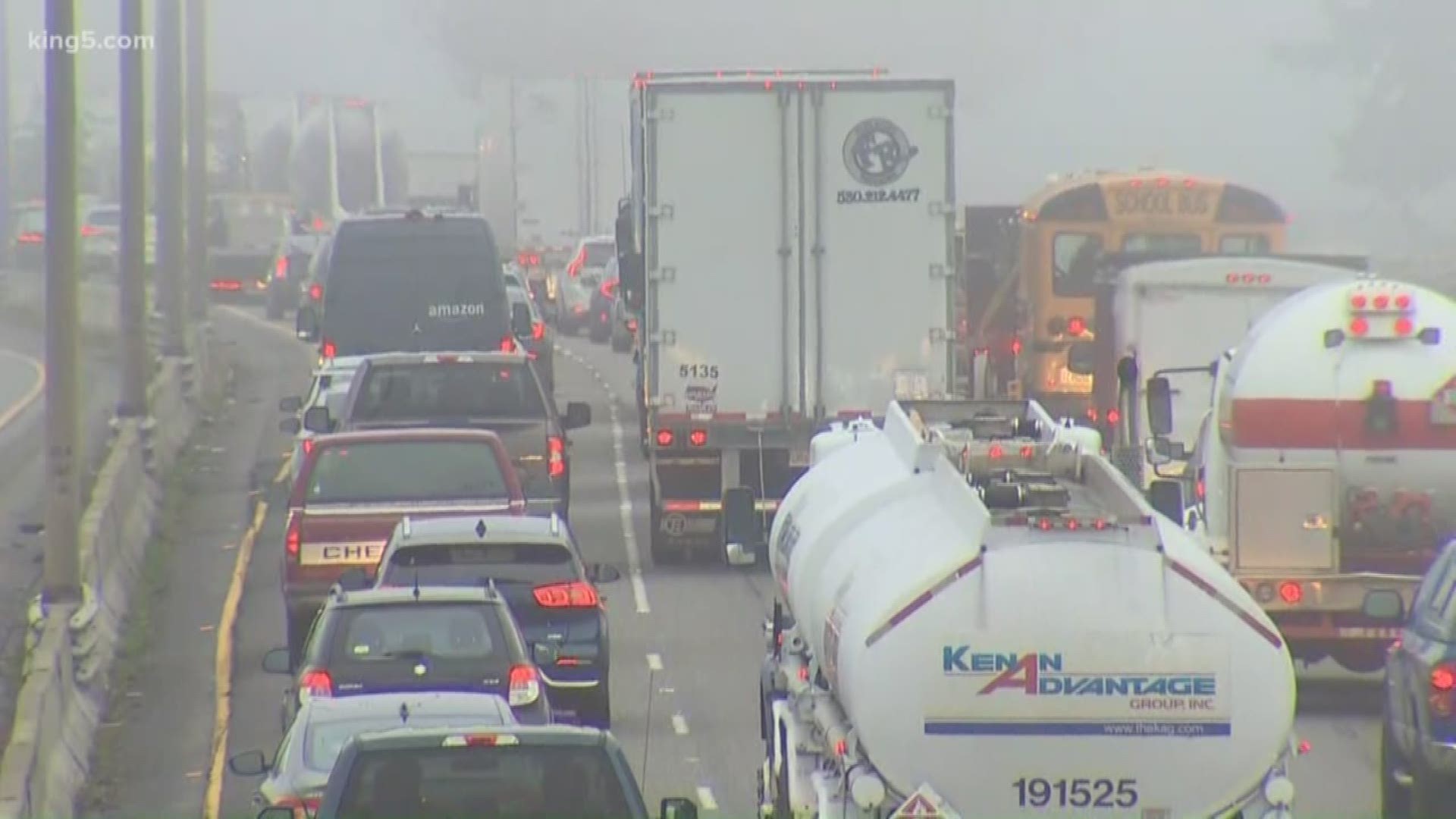 Lanes were blocked between exits 120 and 122 near Berkeley Street, which is just north of the Main Gate to Joint Base Lewis-McChord early Monday morning.

At 6 a.m., WSDOT temporarily opened the shoulder at the crash scene to let drivers through who were caught in the backup. However, the agency says there isn't a good alternate route, and drivers should delay their trips.

“It really is an unfortunate area for us to have a scene that’s this large," Batiste said. "We’re just echoing DOT at this time, which is, if you have the ability, please delay your trip. I know that’s not realistic for many of us on a Monday morning, but there’s no good way around this area, because it’s through JBLM.”

The cleanup process started just before 9 a.m. after detectives finished investigating and mapping the scene.

Clover Park School District ran on a two-hour delay Monday due to the crash, and preschool classes were canceled.