Amtrak train was 50 mph over speed limit before crash

Federal transportation safety officials say an Amtrak train was traveling about 80 miles per hour in a 30 mph zone before it derailed near DuPont. 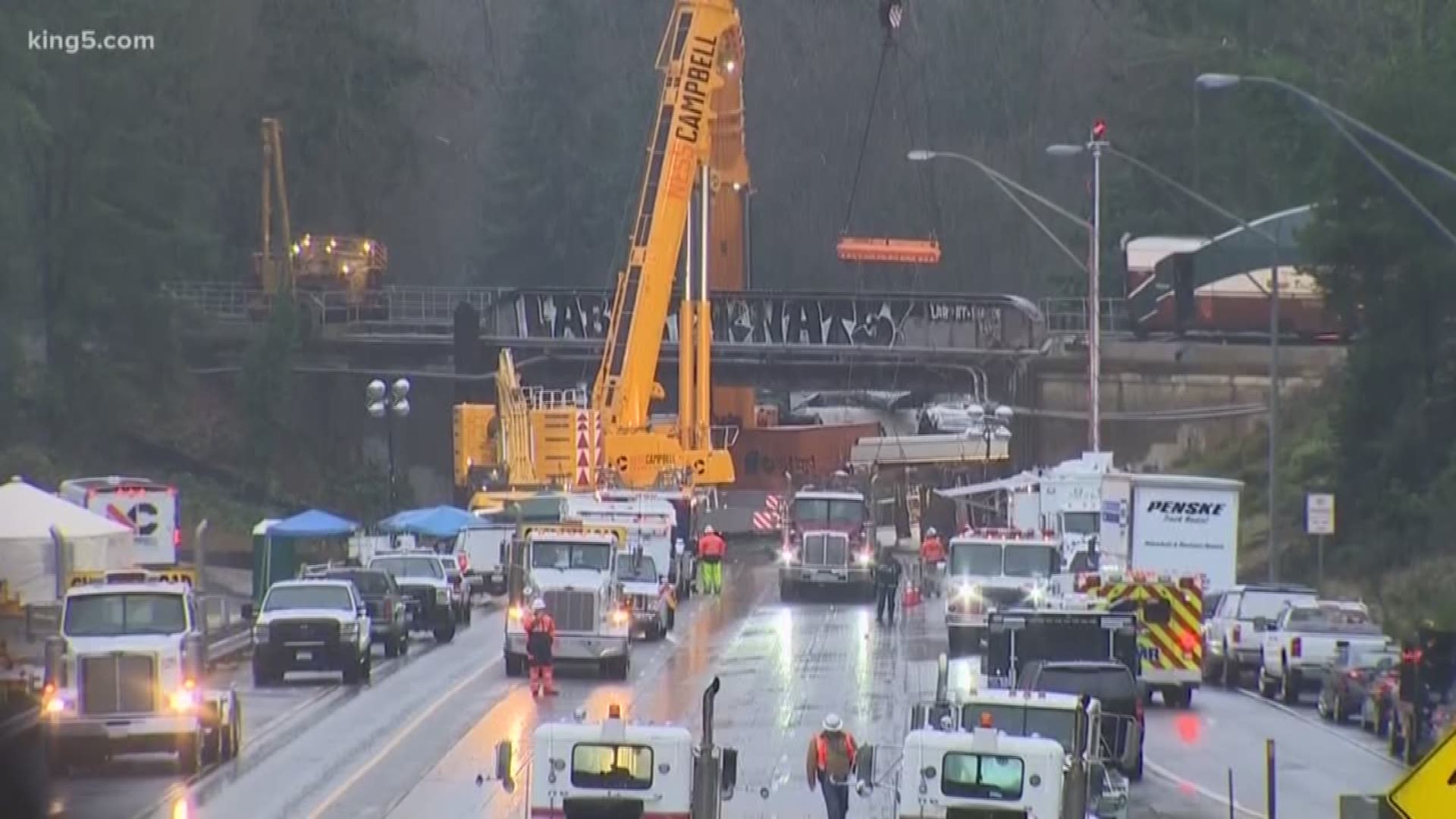 If you're viewing in the app, click here for more video and photos

- Train that derailed was traveling at 80 miles per hour in a 30 mph zone, according to NTSB

- Three of the 85 people on the train were killed. Dozens were taken to area hospitals.

A high-speed Amtrak train that derailed near DuPont on Monday, killing three people and sending dozens to the hospital, was traveling 50 mph faster than it should have been at the spot where it derailed, according to federal transportation safety officials.

The National Transportation Safety Board's investigator in charge received a download of the event data recorder on the rear locomotor that indicated the train was traveling at about 80 mph in a 30 mph zone.

Investigators obtained the recorder and cameras from the front locomotor and will compare data to make sure it matches.

Positive train control — technology that could have slowed or stopped the train automatically— wasn't in use on this stretch of track, according to NTSB.

Investigators also learned the emergency braking system automatically kicked in when the train started to derail. It was not pulled by a crew member.

WSDOT reopened all lanes of Southbound Interstate 5 on Wednesday night after removing all train cars from the scene.

Crews made minor repairs to a guardrail before the lanes reopened. However, there was no damage to concrete on the roadway.

NEW VIDEO: two additional railcars were just removed from the site of the #AmtrakDerailment. (Just after 9 pm) pic.twitter.com/UEyIA93njV

As of late Tuesday morning, there was at least one person in critical condition and at least 17 people in serious condition at local hospitals -- some of them in ICU. In addition, St. Joseph's Medical Center in Tacoma said it had two "red" and two "yellow" patients.

Nineteen people were taken to a reunification site after the crash.

The on-site NTSB investigation will take seven to 10 days. The NTSB will collect factual information at the scene and then will analyze the facts to determine a probable cause of the derailment and make recommendations.

“Our mission is not to just understand what happened but why it happened so we can recommend changes,” said NTSB spokesperson Bella Dinh-Zarr.

Governor Jay Inslee reiterated Tuesday that his priorities are compassion for those affected, restoring confidence in the state's rail service and learning what happened, and getting Interstate 5 reopened.

"We have confidence that we will find out what happened in this horrific event and we will fix anything that went wrong to make sure that in the future rail safety is assured for everyone," Inslee said.

Amtrak Cascades train 501 was headed southbound when it derailed at 7:33 a.m. It included 12 cars plus two engines. Thirteen of those 14 cars jumped the tracks. One of the cars landed upside down on Interstate 5.

There were about 80 passengers and five crew members on board.

Multiple motorists on the ground were injured, but none were killed, according to the Pierce County Sheriff's Department.

About 250 gallons of diesel spilled in the crash. The Department of Ecology was on-site to evaluate the spill and determined it was contained to the soil. No diesel got into waterways.

Amtrak said they will follow through on NTSB recommendations following the crash and will do its best to make reparations to the community.

“We have to keep this as a wakeup call," said Amtrak CEO Richard Anderson. It's not acceptable that we are involved in these types of accidents.”

Anderson also said the company would continue to "improve and evolve the safety culture at Amtrak." 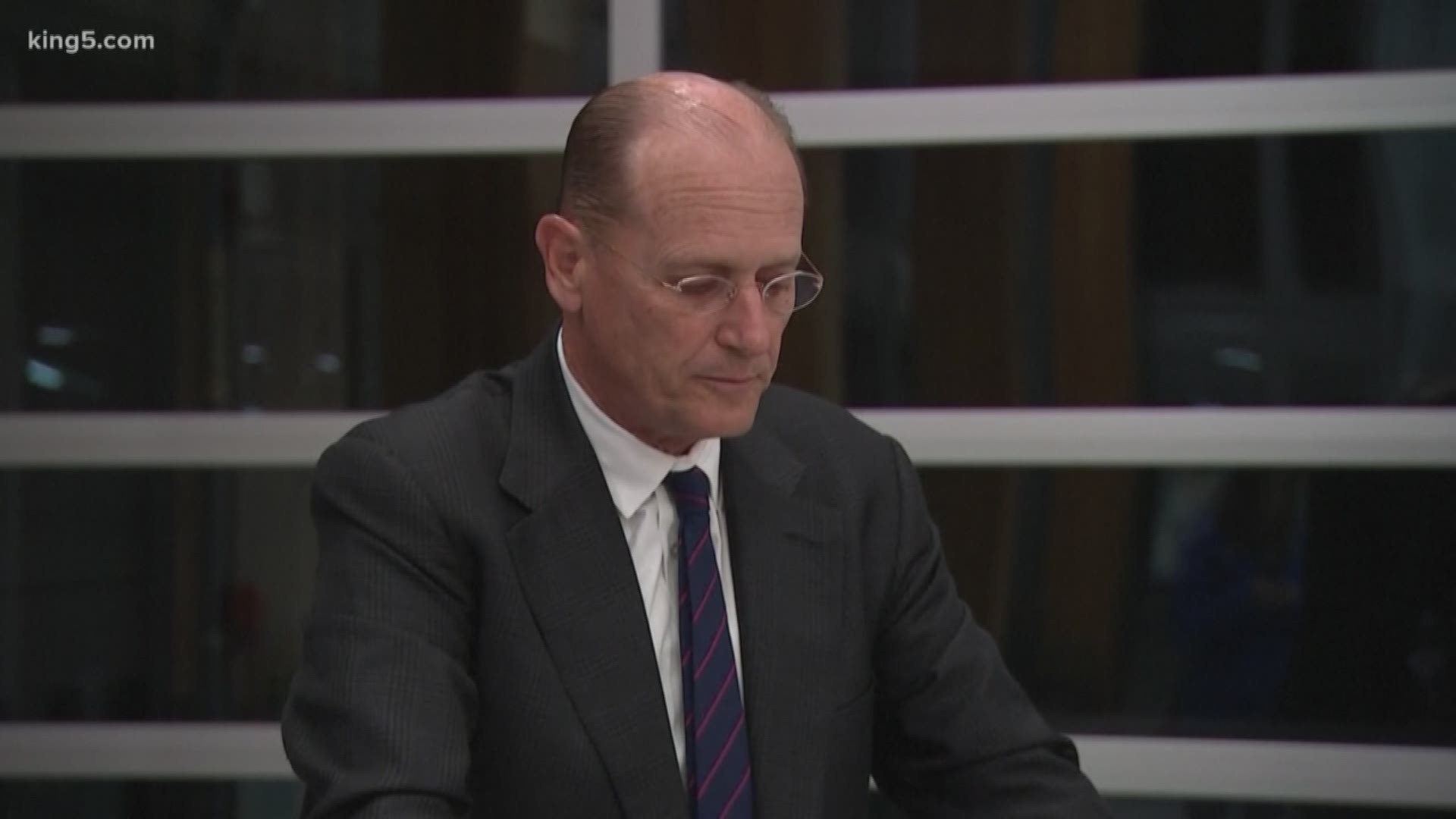 This was the first day for the Amtrak Cascades high-speed train on its new route with trains further inland parallel to Interstate 5 through Tacoma, Lakewood, and Joint Base Lewis-McChord.

The mayor of Lakewood predicted a deadly crash. But Don Anderson thought it'd involve a fast-moving train hitting a car or pedestrian at a crossing.

President Donald Trump tweeted about three hours after the crash that this was an example of why his infrastructure plan should be passed.

The train accident that just occurred in DuPont, WA shows more than ever why our soon to be submitted infrastructure plan must be approved quickly. Seven trillion dollars spent in the Middle East while our roads, bridges, tunnels, railways (and more) crumble! Not for long!

He followed that up minutes later with tweet sending his condolences and thanking first responders.

My thoughts and prayers are with everyone involved in the train accident in DuPont, Washington. Thank you to all of our wonderful First Responders who are on the scene. We are currently monitoring here at the White House.