The Washington State Department of Fish and Wildlife is using a meticulous new technique to track and count black bears, one hair at a time. 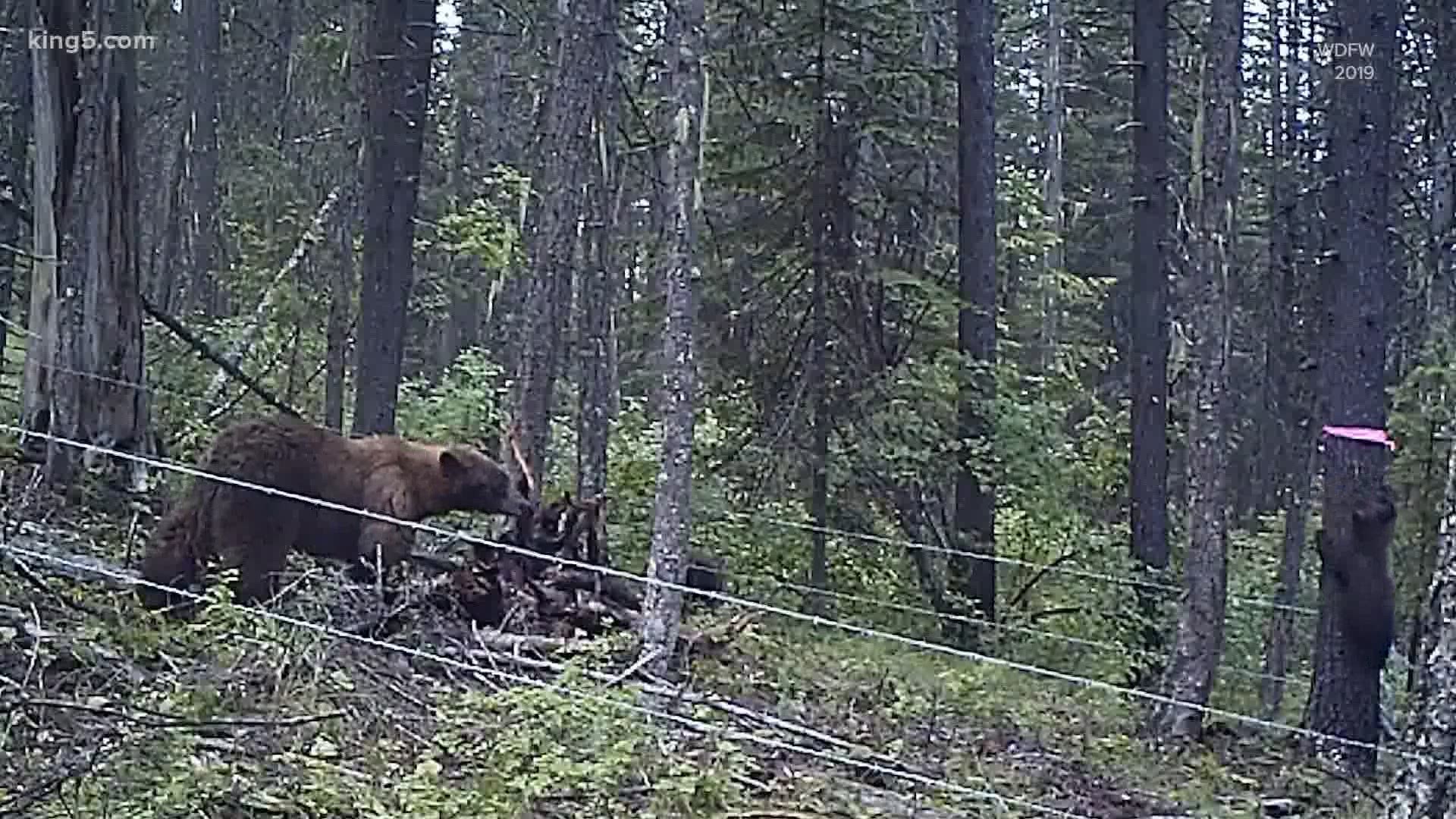 TOUTLE, Wash. — Researchers with the Washington Department of Fish and Wildlife are using a new technique —  to this state agency at least —  to figure out how many black bears live here.

The team is studying population density by using barbed wire traps that collect hair from the bears. The specimens allow a lab to weed out other species from a sample, and even identify and track individual bears over time.

The black bears are attracted to a foul-smelling lure mixture, which biologists apply to a pile of logs inside a small corral of wire strung between trees deep in the woods. Varying heights of wire ensure bears can get through, but cubs, females and larger males can all make contact with the wire.

When checking the contraption, teams use a piece of paper for contrast, and carefully walk along the wire. Any sample is logged and collected.

WDFW said the technique was adapted for Washington based on research by Lindsay Welfelt, Assistant Statewide Bear and Cougar Specialist.

“We’re looking for any hairs caught up on these barbs, specifically bear hair,” said Assistant District Wildlife Biologist Nicholle Stephens, who was checking an area near Toutle on Tuesday. “But if we can’t tell, we’ll collect it anyway.”

The snares are placed about a kilometer apart. In the Southwest Washington survey area near Toutle, there are 36 installations. The team will check each several times over the summer looking for hair and refreshing the lure. Several other areas are being studied statewide this year, including Thurston and Pierce County.

“The idea is we’ll do a couple of them annually in different parts of the state, and kind of walk it around for a few years, and begin to have a sense of how bear densities differ in those different landscapes,” said Eric Holman, District Wildlife Biologist for WDFW.

WDFW hopes it will be an improvement over the previous method, when population estimates were made based on bears killed by hunters, Stephen said. Trends could be observed from those kills, but the data was limited, because the harvest is relatively small compared to deer or elk.

“You can’t draw a lot of conclusions with that data,” Stephens said.

“It’s important for us to know how many bears are out here, so we can manage them properly,” she said. “We want to know as much as we can about those populations. The bears are a hunted species, so that does make it even more important that we’re not allowing hunting to the degree that it could be impacting their populations to a point of concern.”

Stephens notes that WDFW is not currently worried about the number of black bears in the state. There are likely about 20,000 to 25,000 bears in Washington.

Once samples are tested at a lab in Canada, results are plugged into a model, that can extrapolate how many bears live in a square kilometer.

“Other methods don’t work as well,” Holman said. “You can’t get in a helicopter and fly around and count bears, it would be a waste of money. You can’t put a weir across the river and catch all the bears that come down, that works for fish but not wildlife... This method, by combining those mathematics with the magic of the genetics enables us to get an estimate for the bears in a way that’s very hands-off and is a good tool for them.”

But the new method requires driving remote logging roads into the area and hiking off-trail through dense woods to reach the snares. This fieldwork is only made more complicated in the COVID-19 pandemic — masks required, and no shared vehicles. They can check only about nine sites a day.

It’s tough work. On the first three sites of the day, Stephens' group only recovered one tiny hair. She said that's about right. Only a third have samples on any given survey.

Still, it’s a new window into the life of bears, and the things that happen beyond human observation.

“It’s pretty interesting, there are a ton of unanswered questions,” Stephens said.

The team will continue this survey through July - before hunting season for bears opens in August.

RELATED: Find out how you can help wildlife researchers from your home