A team of engineers are testing turbines in Lake Washington that are designed to turn tides into usable energy. 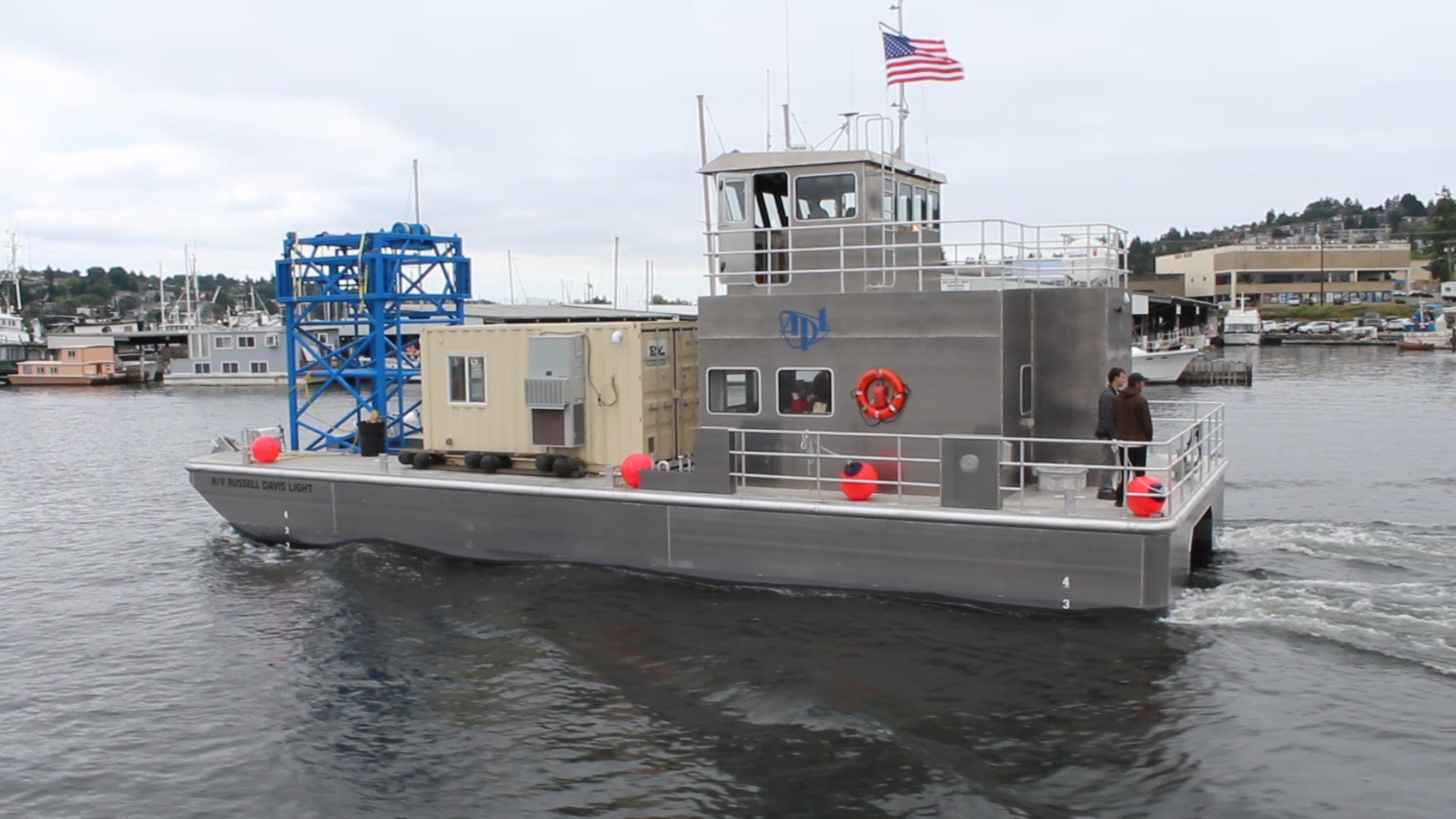 Every day the tide rolls in and out of Puget Sound, and engineers at the University of Washington would like to harvest some of that energy for public use.

Tides are a renewable energy source that is more predictable than wind or sun, but the technology has not accelerated at the same pace as other renewables. Tests of cross-flow turbines on Lake Washington are a step forward in the development of this new source of power.

Using a catamaran-style boat specially built for testing ocean instruments, the team of engineers from the Applied Physics Lab lowered one of their cross-flow turbines into the waters of Lake Washington. For these early tests of the turbine’s performance, the team is re-creating the flow that would be produced by the tides by driving the boat at variable speeds and monitoring the energy output of the turbine.

“We’re putting the turbine down into the water. We’re going to run it at a bunch of different speeds, and we essentially add energy into the system to get it spinning up to a certain speed before it takes over and ends up generating more power than we put into it,” explained Cassie Riel, an engineer working on the project.

Another benefit of cross-flow turbines is that their blades are a simpler shape than those used for axial turbines, meaning they are cheaper and easier to manufacture.

Riel explained that cross-flow turbines get energy from a “lift” effect similar to airplane wings. They have to put some energy into getting the turbines spinning, but at the right speeds, they get more energy out than they put in.

Unlike axial turbines, they do not need to adjust the position of the blades or the direction the turbine faces, but they do need to regulate the speed to get the maximum energy output.

Fear about harming or interfering with marine life has been one of the barriers to harvesting energy from the oceans. To address those concerns, the team at Pacific Marine Energy Center has developed a special tool known as the Adaptable Monitoring Package (AMP). The arrangement of cameras and other instruments on the AMP make it look like a face watching over the underwater activities.

The AMP device includes sonar that uses sound to detect nearby fish, stereo cameras with wiping blades to keep the lenses clear collect video and photos, hydrophones to listen to marine mammals, and strobe lights to illuminate the water when photos are captured. This tool can provide around-the-clock monitoring during equipment tests to evaluate what kind of impact equipment might have on marine life.

“The tools onboard can be customized to meet the needs of different monitoring situations,” explained Brian Polagye, director of the Pacific Marine Energy Center.

Earlier this year, the Applied Physics Lab finished a test of wave-energy powered AMP off the coast of Oahu. The test was a success for both the AMP and the wave-energy technology, as both were recovered fully functioning after six months of being unattended in the ocean. The AMP didn’t detect any conflict between the wave-energy buoy and marine life. The independence of the system opened new possibilities for marine monitoring for scientific purposes.

While similar real-world tests of tidal energy turbines are still a way off, the team at the Pacific Marine Energy Center are working to make the ocean the next frontier for renewable energy.