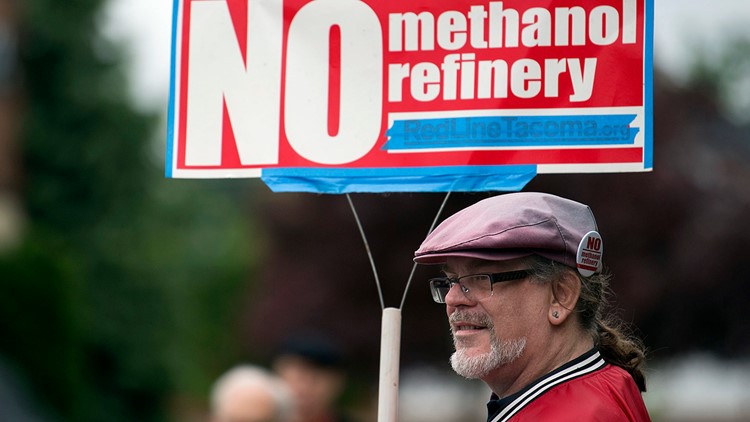 Photo by: AP
FILE - In this 2017 file photo, Mark Keely, of Kalama, Wash., stands with other protesters outside the Washington Department of Ecology's Vancouver field office in 2017. Keely and others were demonstrating against the proposed methanol refinery that could be built in Kalama. The department dealt the project a setback on Friday, Nov. 22, 2019, saying it could not proceed without further environmental review of its greenhouse gas emissions. (Amanda Cowan/The Columbian via AP, File)

TACOMA, Wash. — Washington state dealt a setback Friday to efforts to build one of the world’s biggest methanol plants on the Columbia River, saying that five years in, its backers had failed to provide enough information about its greenhouse gas emissions and how they would be offset.

The $2 billion Northwest Innovation Works project would take natural gas from Canada and convert it into methanol, which would be shipped to China to make olefins — compounds used in everything from fabrics and contact lenses to iPhones and medical equipment.

They called that the single largest initiative in Washington for reducing emissions — equivalent to removing more than 2 million cars from the road.

But environmental groups said there was no evidence to support that statement and that the project would create huge emissions of its own. In its decision Friday, the Washington Department of Ecology said further review was necessary “to determine the adequacy of the proposed mitigation for the Project.”

The review is expected to take about a year.

“The company continues to rely on this very dubious claim that their methanol is going to replace dirtier methanol made from coal,” said Brett VandenHeuvel, executive director of the conservation group Columbia Riverkeeper. “There’s just no justification for that. The Department of Ecology is doing its job.”

RELATED: Climate change puts 60% of US superfund sites at risk

In emailed statements, Northwest Innovation Works said Friday it was disappointed but “prepared for the long haul” and ready to prove its project will reduce global emissions.

The company, which is backed by the Chinese government, has noted that it offered to mitigate for all greenhouse gas emissions it generates in the state, and that it was investing in technology that would eliminate all water discharge from its facility into the Columbia River.

The company says that because producing methanol from natural gas costs about half what it costs to make from coal, it would have a competitive advantage — as well as an environmental one — over Chinese methanol production.

“If this doesn’t get built, the result will not be less material produced in the world,” Kent Caputo, general counsel of Northwest Innovation Works, said earlier this week. “It will be that those materials will be produced in countries that do not adhere to the environmental and regulatory standards that Washington state has.”

They responded on Nov. 4, objecting that some of the information sought had already been provided or was beyond what state law required.

Ecology’s decision Friday came about a week after conservation and public health groups, including Columbia Riverkeeper, the Sierra Club and Washington Physicians for Social Responsibility, sued in U.S. District Court in Tacoma to invalidate key federal permits for the project.

The groups said the U.S. Army Corps of Engineers did not properly consider the huge amount of greenhouse gases the project would emit — more than 1 million tons per year, an amount that would increase Washington's greenhouse gas emissions by 1%.

They also said federal reviews had failed to properly consider the project's effects on threatened salmon runs and on endangered orcas.

Local officials have supported the project, noting it would bring about 1,000 construction jobs and 190 longer-term positions to the region.

Washington Gov. Jay Inslee used to support it, saying it would help clean up China's plastics industry. He changed his mind last May amid his short-lived presidential run, which centered on combatting climate change. He said that because of the urgency of the threat from global warming, he could no longer support launching massive new fossil-fuel infrastructure in the state.