Washington Department of Ecology officials say there's been no impacts to wildlife and they do not believe oil flowed into any waterways or bodies of water. 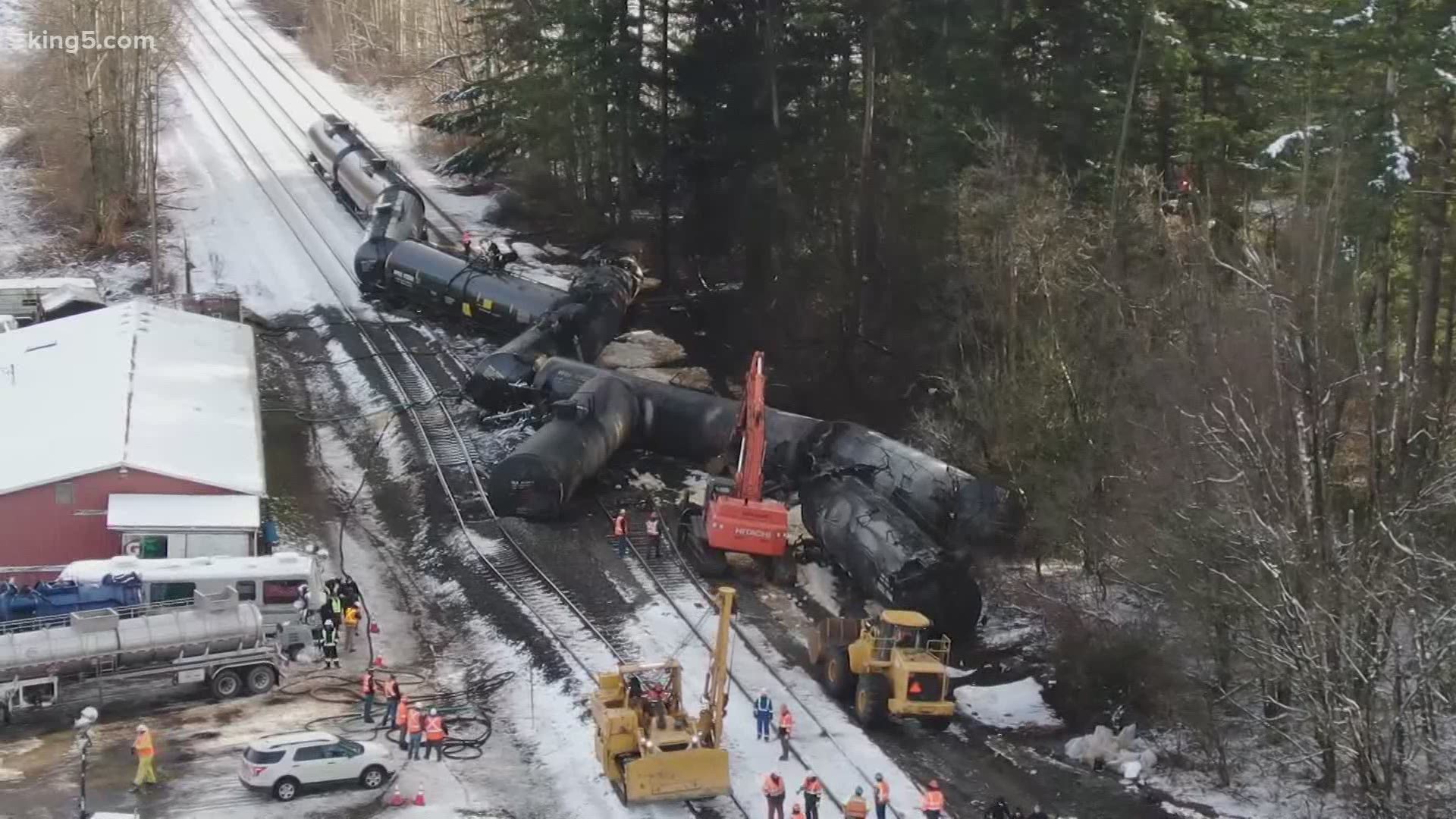 CUSTER, Wash. — The environmental impacts of crude oil spilled from a derailed train in Whatcom County appear to be limited, though the investigation and monitoring will continue, officials said Wednesday.

The BNSF train derailed late Tuesday morning in the town of Custer, near the Canadian border. The cause is under investigation by federal and local authorities.

Three cars ruptured, officials said, spilling an unknown amount of crude oil, and sparking a fire that prompted evacuations in the area.

Now, BNSF is working with the U.S. Environmental Protection Agency and Washington Department of Ecology to clean it up. Crews have been pumping oil out of the stricken cars so they can be cleaned and removed.

“Our ecology responders have been circling the site looking for pathways of off-site migration of crude oil, and so far, we have found none,” said David Byers with the Department of Ecology during a briefing Wednesday.

Byers said air monitoring in the nearby community has shown levels very near baseline, and did not raise health concerns for those living in the area. He believes it’s unlikely oil contamination made it into the ground water, but the department will continue to investigate. Soil contamination in the immediate area is likely though, which will require cleanup, he said.

“All that will take time, and Ecology, and our ecology team, our responders will be here until we have answers to all these questions,” Byers said.

Monitoring for impacts to wetlands is also continuing. Ecology said there are no known impacts to wildlife at this time, and they do not believe oil flowed into any waterways or bodies of water.

It’s unclear how much oil was spilled, because the responders must first determine how much was lost to other means, including how much will end up being pumped out of the tanks, how much burned, and how much evaporated. The team will perform a ‘mass balance’ calculation to eventually answer that.

Officials were not immediately able to say on Wednesday how much oil the three punctured cars were carrying.

The cars involved are the DOT-117R model, BNSF said, an older tanker that has been retrofitted to meet modern safety regulations. BNSF does not own the tankers, the rail company said, directing questions to Phillips 66.

Interestingly, Reuters reported in 2018 that BNSF was looking to limit use of 117R tankers for new contracts, following a derailment and 230,000 gallon crude oil spill in Iowa.

Reuters reported at the time this move was met with resistance from the oil companies, which generally own or lease the tankers carrying oil, and supply them to the transporting rail companies.

BNSF spokespersons were not able to elaborate on this Wednesday, saying only that BNSF “transports all legal tank cars,” and that the 117Rs are legal.

So for now, the cleanup in Custer will continue.

“Washington State has some of the highest expectations for how clean is clean, and when we end the final cleanup as a result of this incident,” Byers said. 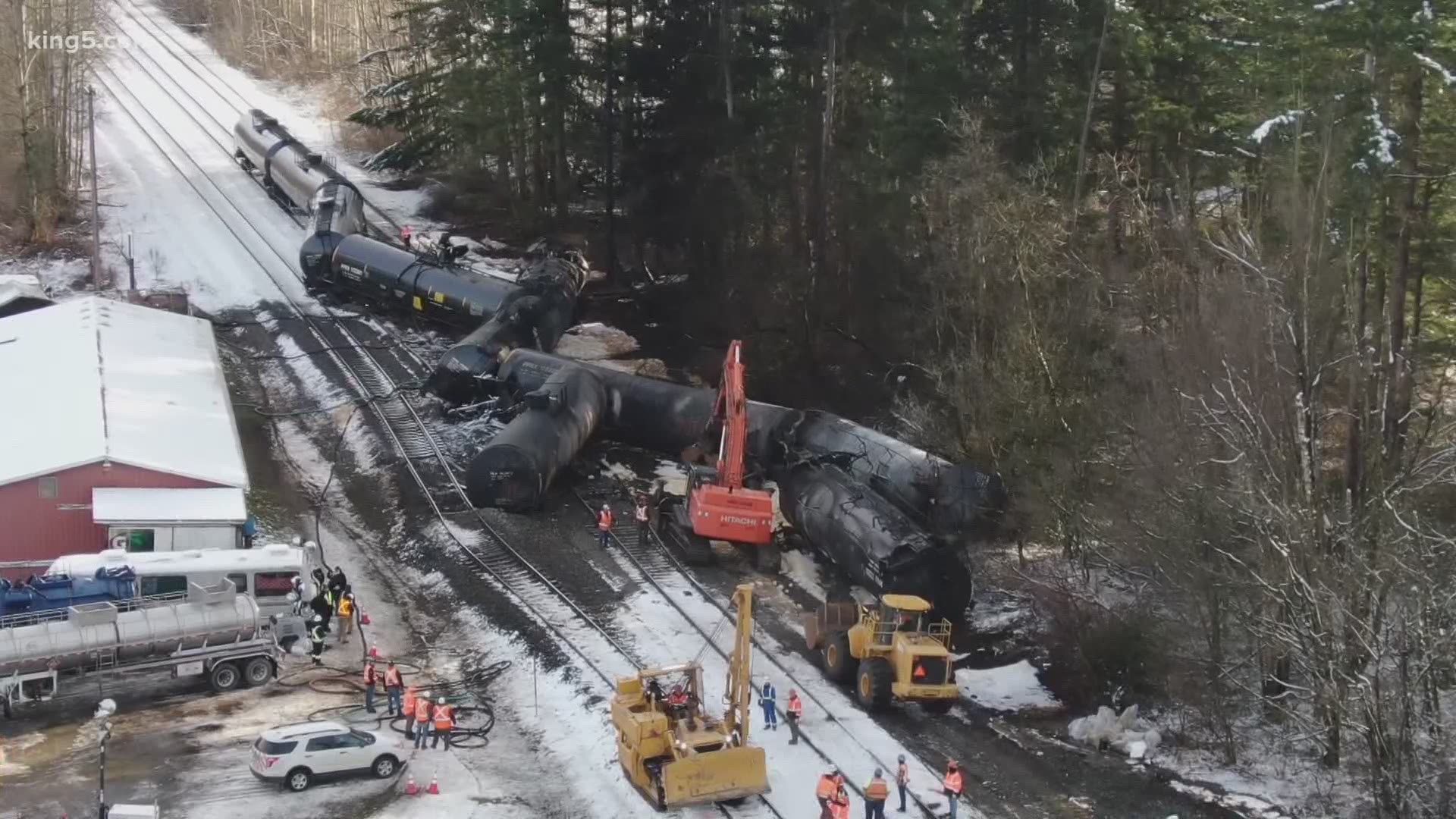