A Soft Place To Land in Graham will close its doors after releasing the last animal in its care. 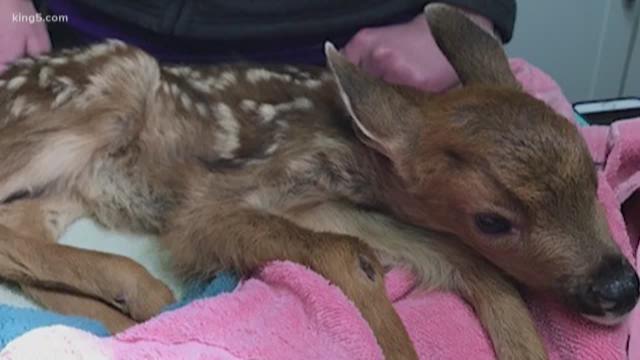 A second wildlife rehabilitation center is closing its doors this week after the Washington Department of Fish and Wildlife seized three fawns and a young elk from a Rochester facility.

WDFW euthanized the animals, claiming For Heaven's Sake Animal Rescue and Rehabilitation violated its permit by not taking proper steps to avoid imprinting the animals and state law required they be removed. The deer and elk were too habituated to humans, WDFW said, lingering around officers with no fear. The elk even head-butted one of them as if to ask for food.

For Heaven's Sake has refuted the claims, calling the animal seizure an abuse of power. The animals were so scared when WDFW tried to seize them, they ran off and had to be immobilized using a dart gun in order to load them into a trailer for transport. Now, another group is asking the state to deactivate its permit for fear WDFW lacks proper protocol to protect the rehab centers.

"If there are accusations of violations, let us speak to those before a peer group or a review board that would include wildlife biologists, wildlife veterinarians, other rehabbers, those who have experience with the processes that we follow and the stages the animals move through so that at least we feel like we'd get a fair chance to defend what we're doing," said A Soft Place To Land Director Jasmine Fletcher-Glaze.

Fletcher-Glaze loves rehabilitating wild animals but says it's not worth the money and emotional risk if the state can seize them without due process. She has one skunk left to release, but after that will shut the doors of her Graham rescue.

KING 5 obtained Tuesday a copy of the complaint filed with WDFW by an intern at For Heaven's Sake. It claims that director, Claudia Supensky, did not adequately train volunteers.

"Claudia came out and showed us how to properly hold a bottle when feeding them, and we were instructed to mother them, and treat them with affection in order to get them to eat. That was all the training we received, we were never trained how to properly care for them, and were never told about the risk of imprinting them. Many volunteers thought that they were supposed to continue to mother them to insure (sic) they ate consistently, and that they would wild up once they moved to the back of the property further away from human contact. We had no idea we were supposed to take steps to avoid imprinting them, and thought they would simply wild up as they grew older."

Supensky calls the allegations false but told KING 5 her attorney has advised her not to comment.

"They're the resource of the people, and we empower the department to manage them. Currently, they're mismanaging them," Dan Boeholt said. "This is just a blatant abuse of public resource."

Boeholt volunteers with several conservation groups like Eyes in the Woods. He says he offered to help relocate the deer and was shocked to learn the state killed three along with an elk.

"Somebody made a really, really bad decision," he said. "Even if we took them out and cougars or bear ate them, it's certainly better than being euthanized by the department. At least they had a chance. This is disgusting."

Critics also point to feeding stations across the state where WDFW tosses dozens of bales of hay daily for wild elk over the winter as people come and watch. Those elk are considered wild, despite the imprinting of the hay trucks and spectators. Some wonder why the state subsidizes a feeding program like that and yet euthanized animals for similar habituation.

WDFW says it was a tough decision but a necessary one. The animals, if released, could have endangered people or themselves. They are no longer allowing For Heaven's Sake to care for ungulates, and are deciding what to do with the remaining deer. One option is to send some of them to WSU for a research project on deer nutrition.

However, the decision is sending shock waves through rehab centers, spreading fear of animal seizures.

"I gave up my permit and I may not ever rehab again. That's a lot of work and a lot of time. And that's my heart. I don't know if that's over," Fletcher-Glaze said. "I felt like I needed to request that my permit become inactive and not have animals in my care in order to feel comfortable that I could voice my concerns and do that in a non-confrontational and constructive way."

11 deer may be euthanized