Up to 40 to 50 California sea lions were seen congregating at a breakwater in Ballard, creating a spectacle. 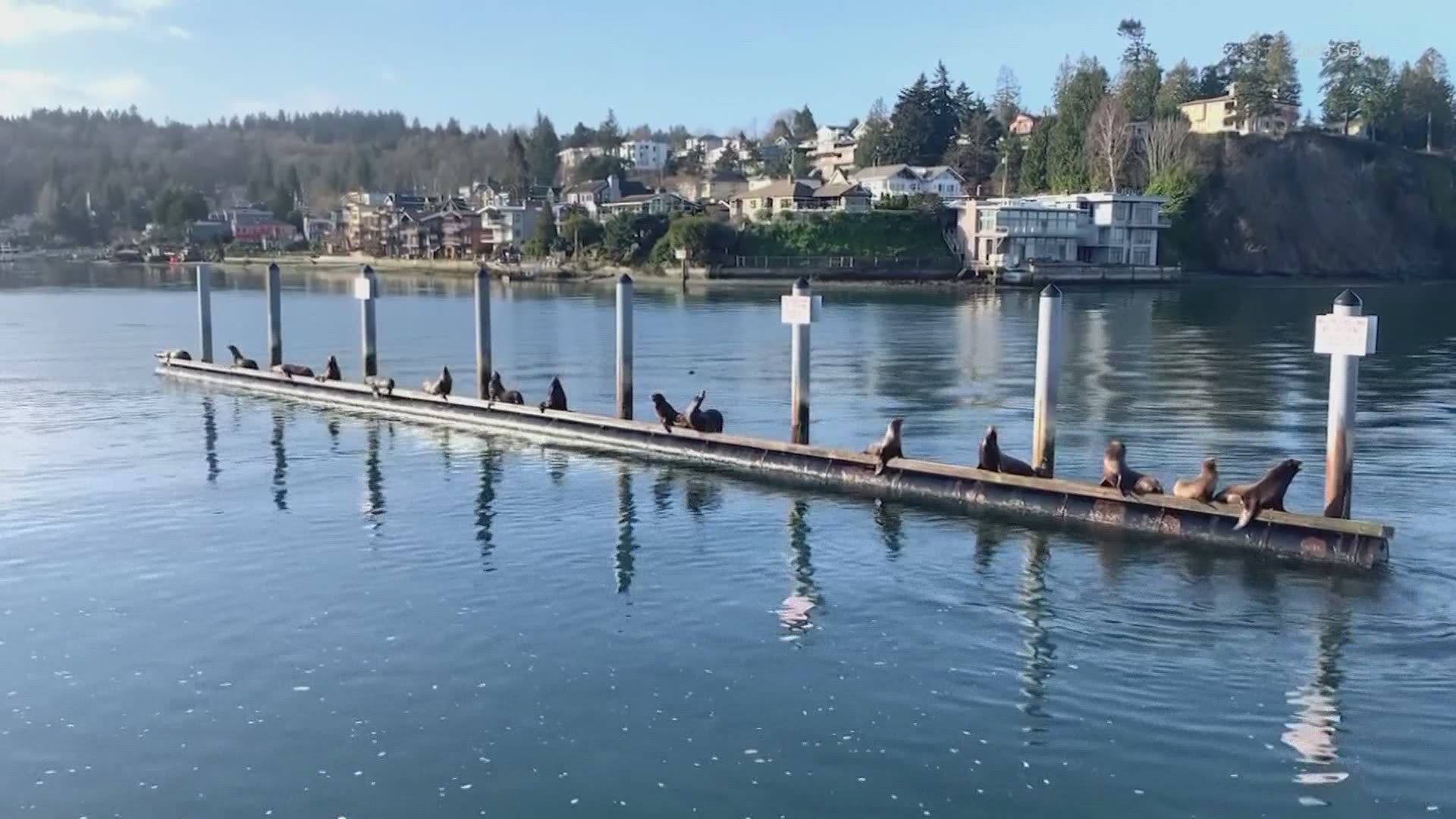 SEATTLE — A group of sea lions has been causing a stir in Seattle's Ballard neighborhood. The group, which has been reported at times to number 40 to 50 animals, has been squabbling over a floating breakwater near Ray’s Boathouse, a waterfront restaurant.

The California sea lions, known for their loud vocalizations, have drawn crowds of onlookers.

“It’s like P.T. Barnum said, nothing draws a crowd like a crowd,” said Doug Zellers, general manager and co-owner of Ray’s. “So when you get a couple people here, more people pull in.”

And there has certainly been plenty to see, Zellers said, while the restaurant, which reopens Wednesday, was closed to diners during the pandemic.

“What is comical is they try to get up on that breakwater, too many of them, and they’ll rotate it,” Zellers said. “It’ll high-side and they’ll start falling off, they have to switch gears to the other side – it’s like a rocking boat, they’re all falling off at some point. It’s pretty comical.”

The Washington Department of Fish and Wildlife (WDFW) sent a team to check out the situation over the weekend, but found nothing of concern. They recorded a little more than a dozen of the creatures, which they identified from photos as primarily California sea lions.

They're also notorious for lurking around the artificial funnel of the Ballard Locks when salmon are running, using the human-made infrastructure to more easily hunt.

Lambourn said some unclear combination of factors likely brought the creatures to gather in such a visible place: It's a calm cove sheltered from wind. Recent winter weather has made their usual pull-outs on buoys unpleasant. And transient killer whales — which eat sea lions — were spotted in Puget Sound earlier this month.

And of course, there’s the availability of prey, but it’s unlikely salmon are the draw this time of year.

“Last year, we had an historic herring spawn in various areas of Puget Sound, so they may be kind of hoping that will happen again this year,” Lambourn said.

She said the gathering is not necessarily a sign of mating, because sea lions generally start pupping and moving to rookery sites in May.

Monday, the breakwater emptied out and the remaining sea lions prowled off into the sound. Lambourn said she thinks it’s unlikely they’ll return in the large numbers spotted these past few weeks.

It’s a spectacle lost – but not all bad news for neighbors.

“I live up the street, and we sleep with our windows open a little bit, and it was loud,” Zellers said. “It sounds like a big pack of barking dogs. It echoes all around the canal here, and off the homes across the water. It’s something to hear.”