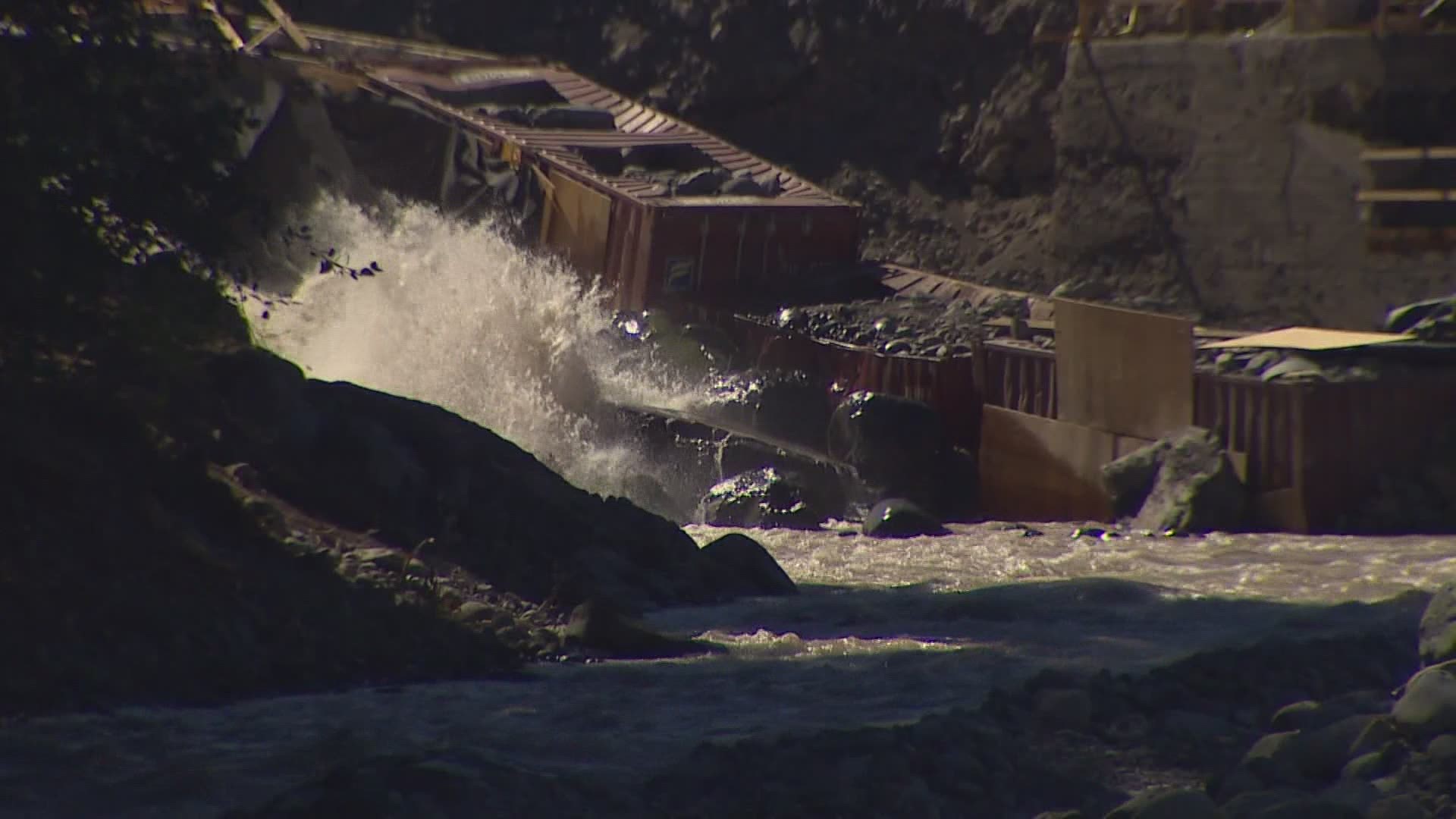 SEATTLE — The Puyallup Tribe is hoping to stop an embattled dam operator from further harming fish in the river, according to new filings in federal court.

Operators of the Electron Dam on the Puyallup River are looking to open the intake, which would allow them to begin generating power, the tribe said.

Electron Hydro and parent company Tollhouse Energy of Bellingham made headlines last year when they improperly installed artificial turf in a diversion channel while modernizing the century-old dam. High flows and debris tore the plastic lining over the turf, sending chunks of the turf material and countless crumb rubber particles downstream, and raising concerns for the endangered Chinook salmon that rely on the river to spawn.

The aging dam uses a 10 mile flume to divert water, before it drops 875 feet to generate power. But that all begins with an intake at the dam site, a few miles outside of Mt. Rainier National Park.

“Opening the intake now is probably the worst possible time for a variety of reasons,” said Lisa Anderson, environmental attorney for the Puyallup Tribe. “But no matter when you open that intake, it is going to take listed species and other fish that aren't listed under the Endangered Species Act into the system. And when they do that, they run the risk of killing a certain number of them depending upon the species and conditions.”

The tribe is asking for a preliminary injunction to stop this.

Specifically, the tribe's filing said their biologists have found "numerous steelhead redds" in the edges of the river channel. Diminished flows from water diverted into the flume would narrow the channel, killing the eggs, they argue.

Additionally, they claim a lack of screen on the intake could suck in fish, harming or killing them.

The tribe and partners on the suit are raising other issues as well. They allege Electron has improperly installed rock and steel structures driven into the riverbed. They also shared pictures with KING 5 of large chunks of turf that are still being discovered downstream – one large piece was found in March, and another on a side channel of the Puyallup in May.

Credit: Eric Marks/Puyallup Tribe Biologist
A piece of artificial turf is retrieved from the Puyallup River in May, 2021.

Generally, Anderson described a lack of confidence with Electron Hydro and Tollhouse Energy since the initial crumb rubber release and response.

“Everything they did last summer makes it worse,” said the Puyallup Tribal Council, the Tribe’s elected governing body. “The intake sucks in fish and kills them. Their illegal activity last year reduced the already struggling populations. The fish population simply cannot absorb any further losses without significant risk of just disappearing altogether. We have no trust in the company to protect fish.”

KING 5 sent questions to Tollhouse about the various allegations, but Tollhouse didn't address the specifics, but sent a general statement.

"Electron Hydro takes the concerns of the Puyallup Tribe of Indians and the general public very seriously," wrote Chris Spens, Tollhouse director of Regulatory and Environmental Affairs. "Electron will continue to work with all regulatory agencies to address these concerns in an appropriate and effective manner. When completed, the approximately $15 million intake renovation project will prevent fish from entering the generation facilities and migrate past the diversion safely, thus allowing this climate-change fighting clean energy generating facility to deliver its promise of being a renewable resources community partner."

The dam can power 20,000 homes. It was previously owned by Puget Sound Energy (PSE), before it was sold to Electron Hydro. The utility bought power from the dam, but terminated the contract late last year following the crumb rubber incident.