The solar panels installed at Fishermen's Terminal will serve as a pilot study, to see what works and how to expand it. 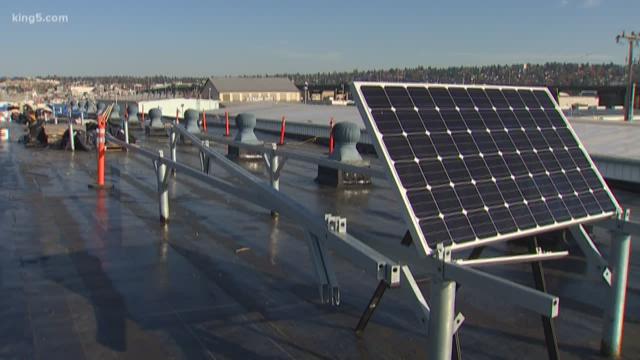 At a landmark known for catching fish, work has begun to start harvesting the sun. Solar panels are going up at Fishermen's Terminal, the first solar project for the Port of Seattle.

They will power Net Shed 5, one of the storage facilities for fishermen who use the facility.

"It's somewhat appropriate that we have renewable energy going into a place that depends on a renewable fishery to support our local economy, both in the installation of the solar as well as in the great fish we get to catch," said Port Commissioner Fred Felleman.

Felleman and his fellow Port Commissioners recently voted in a strategic plan to reduce greenhouse gas emissions. The solar panels installed at Fishermen's Terminal will serve as a pilot study, to see what works and how to expand it.

"We're happy to be able to support our local installers. Even these cells are built in Bellingham. We're really proud to be a part of something that's economically and environmentally contributing to our region," Felleman said.

The Port chose the roof of Net Shed 5 because it needed to be replaced anyway, but their interest in solar is part of a growing trend as public departments turn toward renewable energy across Washington.

"Our company A&R Solar was founded about 10 years ago. We started as two guys who didn't pay themselves for a couple of years. Now we're growing like crazy. We're up to about 60 people," said A&R Partnerships Director Bonnie Frye Hemphill.

The project and most other solar installations pay for themselves within a decade, Frye Hemphill said. Many customers are also able to bank unused energy with power companies, then get it back for free when needed.

"There's huge interest for power. People want to own their power. They're proud to make their own energy from the sun," Frye Hemphill said.

The Port included a $1 million fund for greenhouse gas reduction in its last budget. Beyond this rooftop, they're looking toward the airport, which is the Port's top carbon consumer.

"It's really important the Port demonstrates its commitment to do our part so others can see this as mainstream for everybody to do theirs," Felleman said.