Rubber debris contaminated the river earlier this summer during construction work on the Electron Dam near Orting. 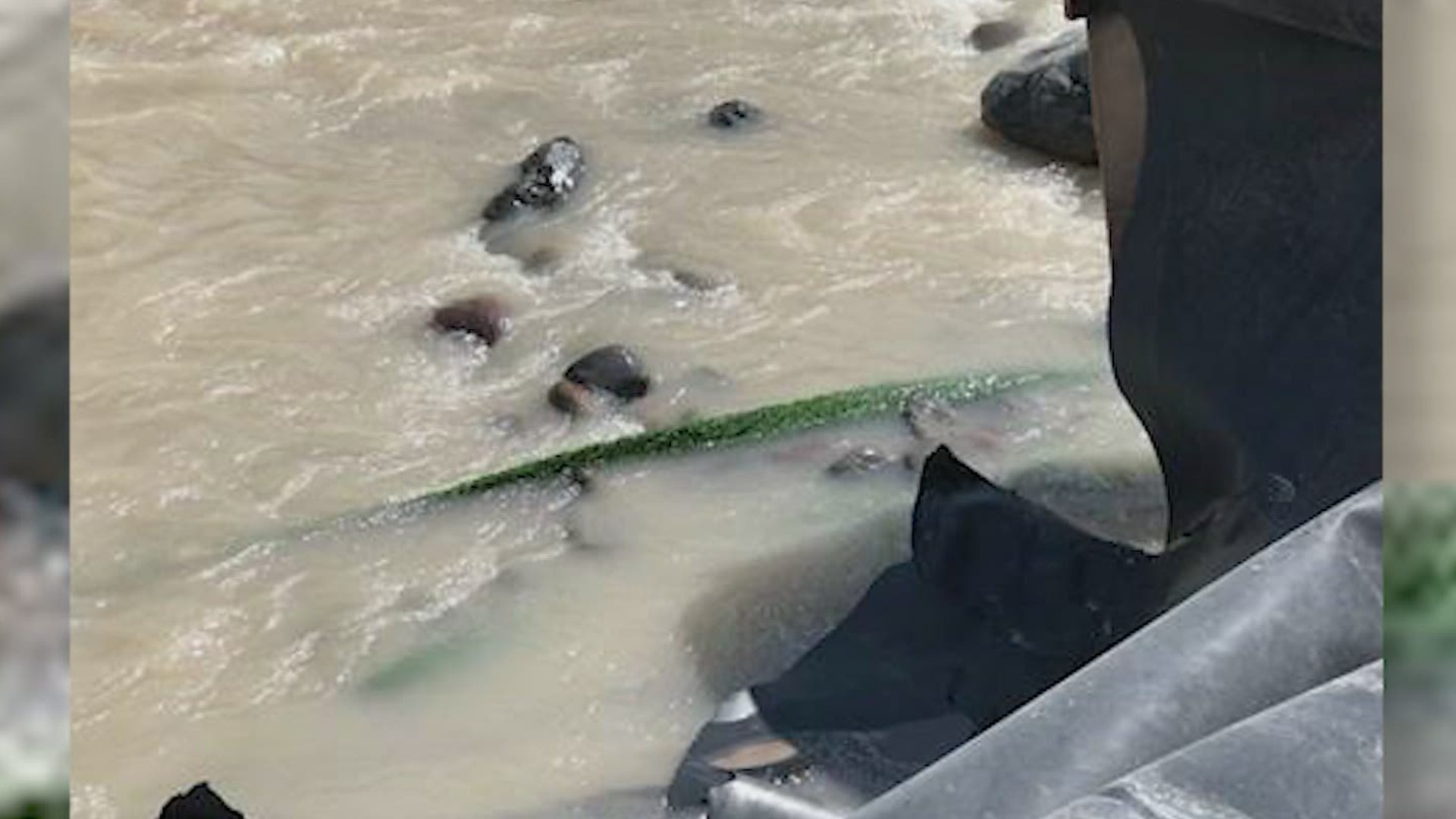 Pierce County is calling for the removal of a dam after crews improperly used artificial turf in a modernization project, releasing yards of the material and crumb rubber into the Puyallup River.

The 116-year-old Electron Dam sits on the Puyallup River, upstream of Orting, outside Mt. Rainier National Park. At the end of July, owner Electron Hydro installed 2409 yards of old artificial turf as padding in a diversion channel, according to a consultant’s report prepared for the company.

High water flows ripped the plastic liner separating river and turf, sending about 600 yards of the material, and an estimated 4 to 6 cubic yards of crumb rubber downstream.

Turf that wasn't ripped up is still installed in the channel - stoking fears of further spills.

It’s a major concern for various stakeholders on the river, including the Puyallup Tribe, because it’s not clear what the crumb rubber might do to endangered chinook salmon. Chinook are a critical foodsource for also-endangered southern resident orcas.

On a Sept. 1 visit to the river, accumulations of the rubber were visible on the river banks miles downstream.

The Army Corps of Engineers, one of several permitting groups for the modernization project, has said turf is not an appropriate material for the project. The Corps sent a letter to dam operators earlier this month demanding the spill be cleaned up.

“By introducing that pollutant into the river, they’ve done what we believe is immeasurable damage,” said Pierce County Executive Bruce Dammeier. “It’s difficult to understand the full damage that’s been done.”

Pierce County sent Electron Hydro a letter this week outlining its demands and guidelines for the cleanup and stabilization for the winter. Dammeier also discussed his eventual goals for the dam – total removal.

“When you choose to put AstroTurf in the river, there’s got to be a callous disregard that demands a serious mitigation action, and I think that mitigation should be removing the dam,” he told KING 5.

He said this spill of turf and rubber has left him no confidence the company could safely continue with modernization plans and operation of the dam, noting a separate fish kill at the site.

Puget Sound Energy (PSE) sold the dam to Electron Hydro in 2013, though it still bought power from it prior to this project. The company has a contract with Electron Hydro to continue purchasing power, but said it’s warned the company it will cancel that deal if cleanup isn’t completed to their satisfaction.

“We have sent a notice letter with our intent to sue under the federal Clean Water Act if the problem isn’t corrected. Quick action needs to be taken to clean up the river and mitigate any further damage,” said PSE spokesperson Janet Kim.

The Puyallup Tribe, which expressed outrage over the crumb rubber release, said it supports the removal of the dam.

“This will have long-lasting impacts to the threatened and endangered fish and animals that feed and drink on the banks of the Puyallup,” said Puyallup Tribal Chairman Bill Sterud in a statement. “There is no excuse or apology that can right this wrong, but Executive Dammeier’s actions will go a long way toward protecting the Puyallup River, which is the lifeblood of our people and the residents of Pierce County. We should all work together to bring back fishing. “

“We will not celebrate, however, until the fish-killing nightmare called Electron Dam is a distant memory,” Sterud added.

The Army Corps of Engineers, which issued a stop-work order after it learned of the spill, said it has permitted Electron Hydro to continue stabilization work related to what Pierce County laid out. The Corps said it is coordinating with partners to minimize environmental impact, and make sure the site is ready for the winter.

Electron Hydro said the spill is a "grave concern,"  in a statement.

“Electron crews have been working over the past several weeks to recover these materials,” a company spokesperson wrote. “Electron is dedicated to river clean-up and restoration as should be expected. Electron will also endeavor to complete the project upgrades to bring the facility into the best form and function for the future.”