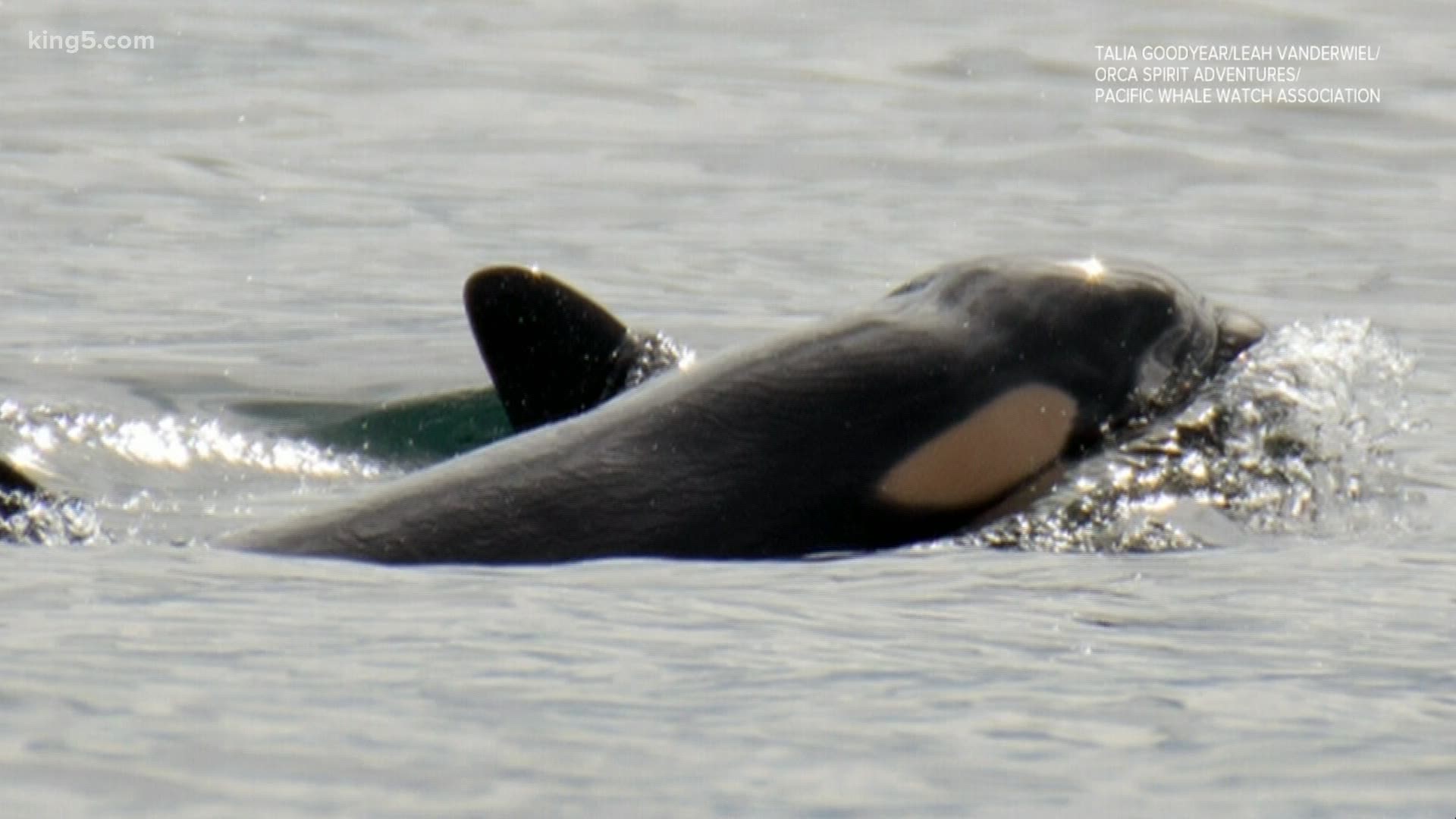 There is another new member of the Southern Resident orca J-pod, the Pacific Whale Watch Association (PWWA) announced Friday.

Expectant mother Eclipse, or J41, gave birth Thursday afternoon miles off the coast of Victoria, B.C. The PWWA said this is Eclipse’s second calf. Her first calf, J51, was born in 2015.

The birth of the new calf was witnessed by professional naturalists Talia Goodyear and Leah Vanderwiel, along with passengers on the Orca Spirit Adventures vessel Pacific Explorer.

“We spotted who we soon identified to be J41 just southwest of Race Rocks,” said Goodyear. “She appeared to be alone at the time and stayed very close to the surface for a few minutes. After going under for several minutes, she reappeared, and this time it looked like she was pushing something with her rostrum. She surfaced like this three or four times.”

A rostrum is the orca's snout that holds its teeth.

"[J41] was aiding the baby up for a few breaths with her rostrum," added Vanderwiel. "At which point the little one started surfacing on its own. It appeared to be a rambunctious little bundle of baby, as every surface was exaggerated and playful.”

Goodyear and Vanderwiel both said it was an emotional experience to watch what was happening.

The vessel notified the PWWA and the Center for Whale Research after the encounter and provided photos of the new calf to researchers to confirm the identity of the Southern Resident orcas.

Ken Balcomb, founder and executive director of the Center for Whale Research, confirmed the photos were of J41 and the new calf.

"We're very pleased to see that J41 has had her baby," said Balcomb. "However, it's too soon to determine the status of the calf, and further observations are necessary before we'll make an announcement of the new baby's health."

The gender of the new calf isn't known yet, but Balcomb-Bartok was hopeful it would be a girl.

“We need to get back to health of whales, that they can sustain those numbers, that the females that are alive and present in the population can eat enough and can mate and have these calves,” he said.

Tahlequah and her new calf were spotted earlier this week near Point Roberts, Washington. J57 was photographed rolling, spyhopping, and swimming alongside his mother, who was actively foraging for food, officials said.

The Center for Whale Research said while it's preferred that new calves are female to help sustain the Southern Resident orca's population, J57 is a welcome addition and is "robust and appears healthy."

Tahlequah gained national attention for carrying her dead calf for more than 1,000 miles for at least 17 days back in 2018. While experts have seen orcas mourn their offspring before, J35 clung to her calf for an unusually long period of time.

The group shared photos of another orca, L72, which showed increased width mid-body between September 2019 and July 2020 indicating she was in the late stages of pregnancy. Killer whale pregnancies typically last 17-18 months, according to SR3.

Although SR3 said orca pregnancies are not unusual, successful births have become less common. The majority of orca pregnancies end in miscarriages. A 2017 study found that could be linked to nutritional stress and a low salmon population. 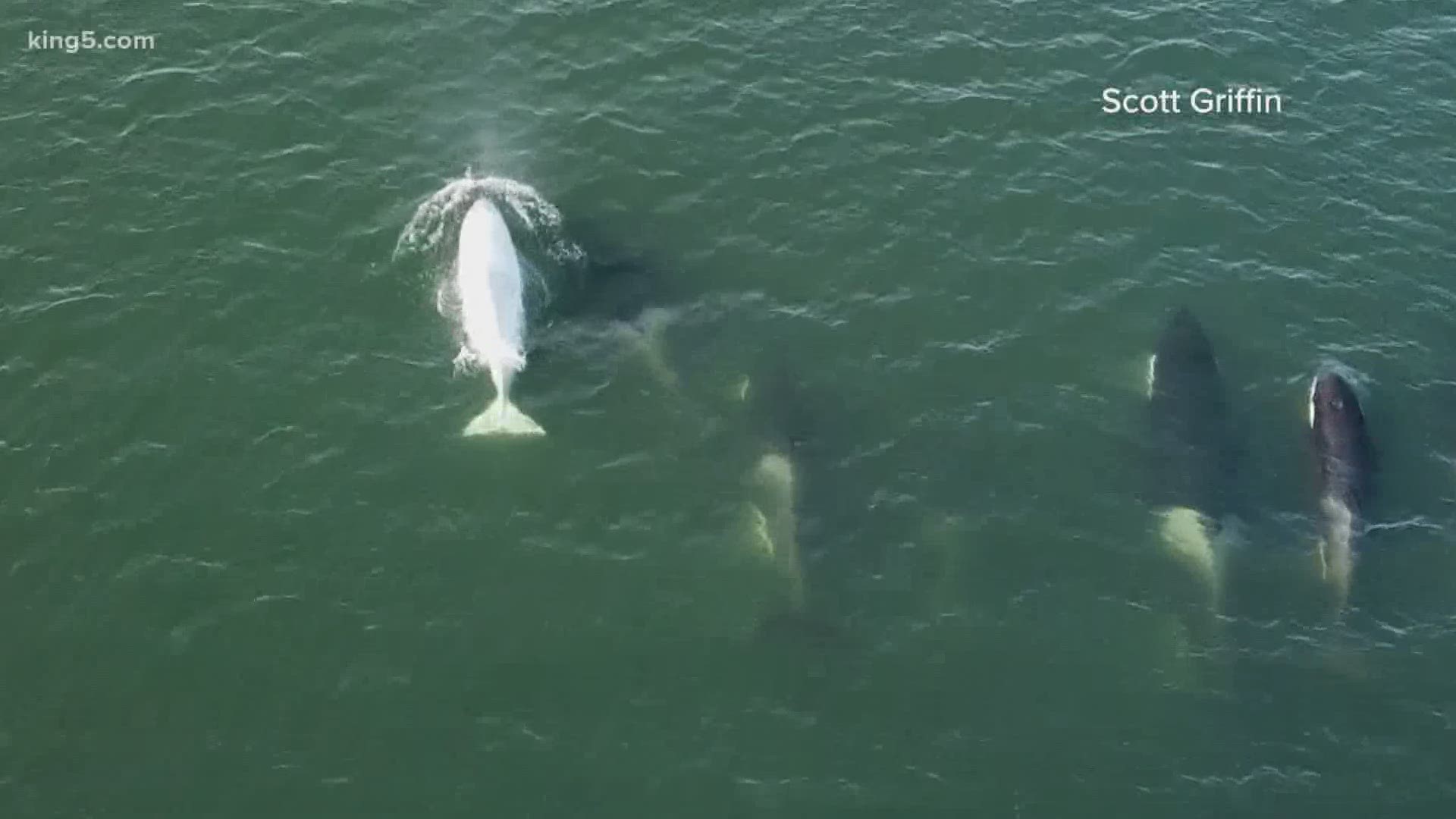