One of the largest estuary projects in the Puget Sound region show just how painstakingly slow salmon recovery is. 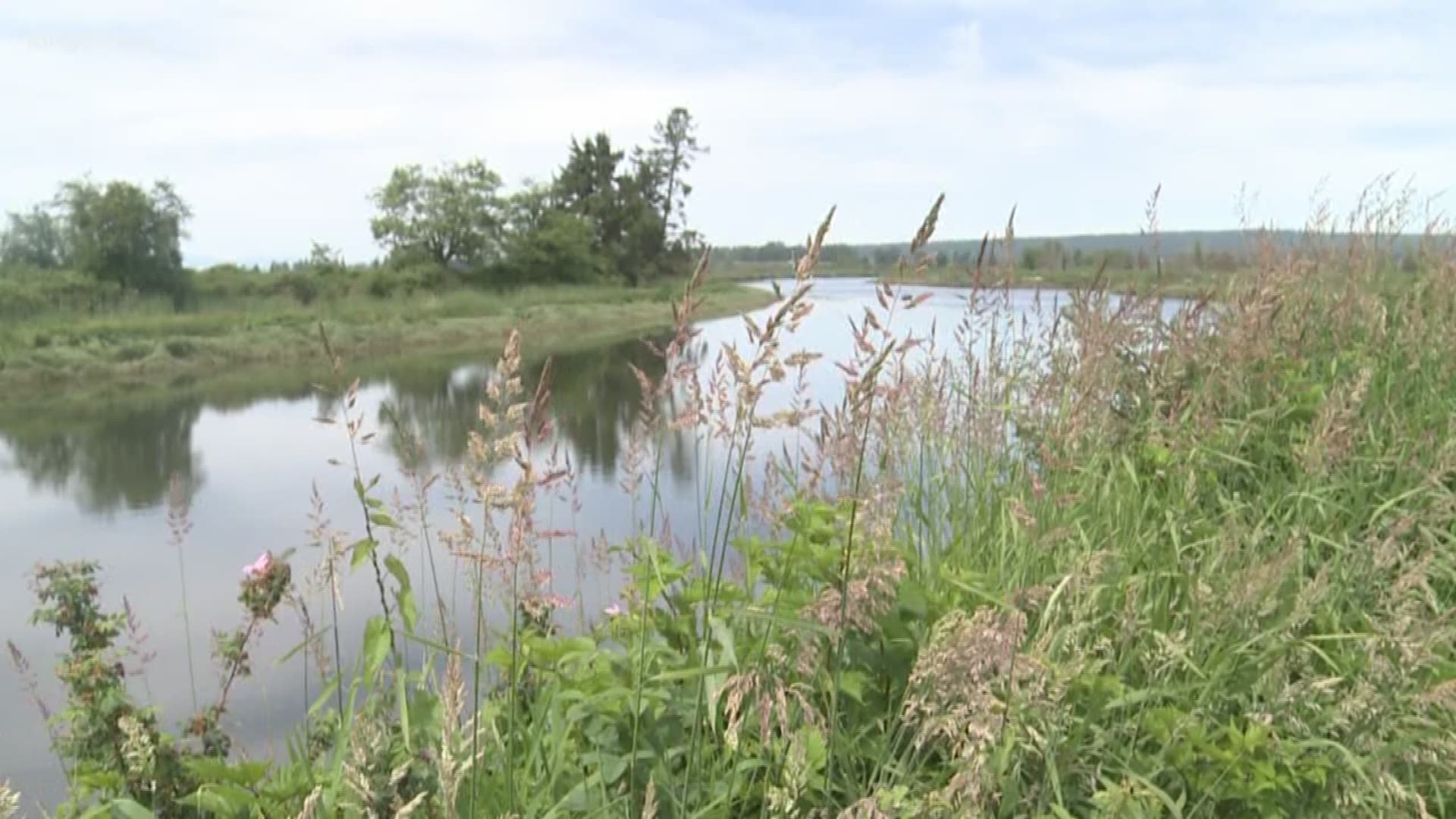 MARYSVILLE, Wash. — When Kurt Nelson started working on restoring a large plot of estuary habitat for salmon on the Snohomish River, his youngest daughter had not yet been born.

Though Nelson can't believe he's spent so much of his adult career working on a single project, it shows just how painstakingly slow salmon recovery moves.

"We were trying to create more salmon habitat and the best place to do this is in the estuary. This particular area was previously farmland that could no longer be farmed because of the development that was going on around it," explained Nelson, who works with the Tulalip Tribes. "We proceeded to purchase about 400 acres, which we converted it into 354 acres of estuary wetland."

The Qwuloolt Estuary project involved nearly two dozen partners, such as Snohomish County and the Washington Department of Fish and Wildlife, and took two decades to complete.

"The Tulalip Qwuloolt project is a huge success that helps maintain Washington’s most treasured attributes including abundant clean water, wild open spaces, salmon, and orca whales.  There is increasing urgency because of population growth and climate change to protect and restore Washington’s icons before they disappear.  We need to continue and accelerate restoration in our estuaries, rivers and in the Puget Sound.  To this end, Tulalip is currently collaborating with the City of Snohomish to remove the Pilchuck River Diversion Dam upstream in the Snohomish Watershed to restore uninhibited access to over 36 miles of pristine and priority salmon habitat," said Brett Shattuck, the restoration ecologist at with Tulalip Tribes.

Crews had to lower about 1,500 feet of levee, build almost a mile of levee, and dig about two miles of channel so salmon could access adjoining creeks formerly blocked by culverts

"We have seen an incredible increase in the number of people coming into our region and with that comes the pressure to build homes and develop these areas that were once pretty pristine," explained Tulalip Tribes Snohomish Basin Capital Projects Coordinator Morgan Ruff. "So part of our challenge in looking at recovering salmon out here in the Snohomish River basin, as well as the rest of Puget Sound, is coming up with ways that we can accommodate all this influx of people coming in, while also maintaining and protecting this critical habitat for the fish."

Back in 2005, the Tulalip Tribes set a goal of restoring 1,237 acres. Since then, they've started to exceed those goals.

This project is one of the largest across Puget Sound.

"We have these types of estuaries, and these areas, all up and down Puget Sound. We have larger estuaries and smaller estuaries. These areas are critically important for juvenile salmon as they’re making their way from the rivers out to the ocean," explained Erik Neatherlin, who is the new Executive Coordinator for the Governor's Salmon Recovery Office. "If we have a functioning estuary, we can add 30 percent to the returning fish. When we open estuaries up, they're used right away. Plants start to come in. Fish start to come in. They use them right away."

Prior to 2015, salmon did not use the estuary. Since then, scientists counting the fish estimate between 10,000 and 100,000 juvenile Chinook annually use the 354 acres.

Neatherlin sees it as a call to action to speed up salmon recovery. Some estimate it could take a hundred years to get to all of the projects around Puget Sound.

"This project that we’re looking at took 20 years, it’s $20 million and it had 20 different partners. That takes an incredible amount of resources and we just don’t have the time to put these projects on the ground at that pace," Neatherlin said.