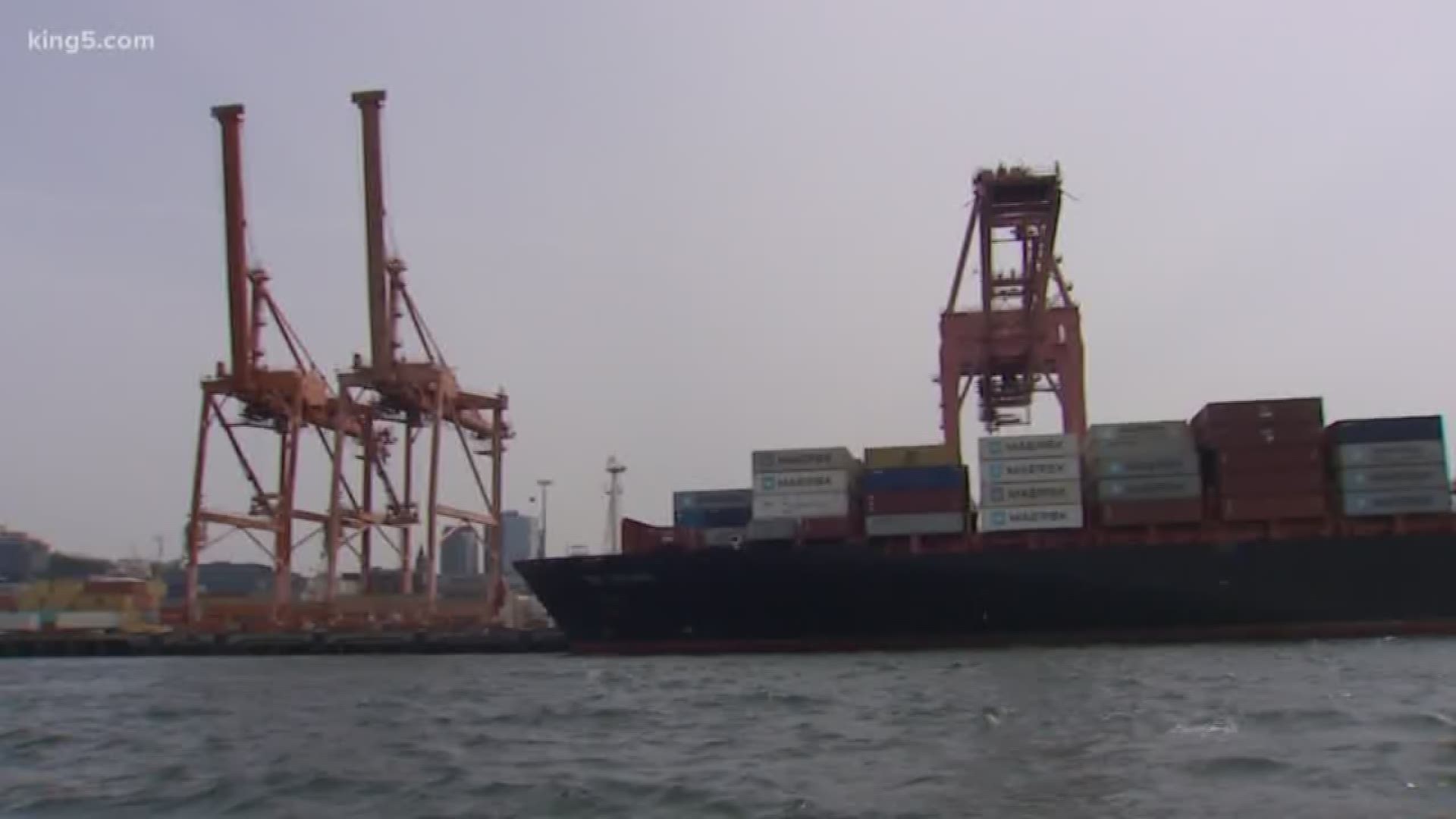 SEATTLE — Balancing Seattle's port economy and its environment has not been easy. Contaminants that are toxic to marine life like the Southern Resident killer whales are a regular concern.

The Southern Resident orcas are often called some of the most contaminated marine mammals on earth. Their fat is filled with toxins like PCBs. When they don't have enough to eat, they metabolize their fat and that poison ends up in their blood. Though outlawed decades ago, PCBs still remain in the sediment around Elliott Bay.

Whether it's toxic wood pilings or chemicals leeching from a scrap metal recycling facility, Seattle's working waterfront is a focus for Puget Soundkeeper Alliance.

Chris Wilke is the non-profit's executive director. He said pollutants can be found in the microscopic organisms, from tiny shrimp up to orcas.

"In every step of that food chain, those pollutants accumulate and eventually by the time you get to an orca whale, it is extremely unhealthy for the animal. But it is unhealthy for the salmon and the herring as well," Wilke said.

Wilke's group investigates water polluters. Near the Duwamish River mouth, the focus is often on contaminants that can have lethal affects on marine life.

"They are chemicals like PCBs, lead, copper, zinc at very high levels that are not safe for marine life. One of the key measures of that is whether it is safe to eat the fish. To the right of the boat is a public fishing pier that has signs on it saying it's not safe to eat the fish," Wilke said.

Even the Port of Seattle has had its issues, Wilke said.

“When the Port of Seattle puts Terminal 5 [back in action], they will implement storm water treatment from day one because Terminals 18 and 46 can’t meet the standards without treatment. There really is no expectation that Terminal 5 is going to do it,” he said.

A fire at Seattle Iron and Metals last year caused even more concern, as burning cars fell into the river along with all of the fire retardants. According to the state, the metal recycling facility has violated its water permit 43 times in 2017 and 2018. Puget Soundkeeper recently reached a $1 million settlement with the auto recycler, forcing them to make changes to protect the waterway.

They're celebrating that win, Wilke said, but also critical of all the battles they fight.

"The state is really not living up to their mandate. A lot of the toxic contamination issues that we have with our salmon can really be traced to the fact that the state of Washington is not enforcing the Clean Water Act to the extent that they should," Wilke said. "When citizen groups like ours are able to step up and force industries into compliance, that's a good thing, but it should not be falling on us to do this. This is the central job of the state."

KING 5 reached out to Seattle Iron and Metals but has not received a response.

The Port of Seattle sent KING 5 the following statement Wednesday:

"Protecting water quality is an ongoing priority for the Port of Seattle and the Northwest Seaport Alliance (NWSA). We are committed to operating our facilities, including large marine terminals, in an environmentally responsible fashion.

The Port meets and exceeds requirements of our stormwater permits, conducts education and outreach to our tenants, practices good source control and installs innovative stormwater treatment on Port properties.

The NWSA recently announced a new lease at Terminal 5, in which the new tenant will design and install a multi-million dollar stormwater treatment system as part of the Terminal 5 redevelopment work. Other container handling facilities have treatment systems in place already.

The Port is also certified Salmon-Safe for parks and public access areas due to landscape and water conservation practices, habitat enhancement, and stormwater treatment projects we install. The Port and its partners have already invested over $200 million in investigation and early action clean-ups that have reduced PCBs in the Lower Duwamish by about 50%.

As public agencies, the Port of Seattle and NWSA embrace our economic, social and environmental responsibilities. We welcome the opportunity to share these efforts with the public. Our next public meeting will take place May 14 at Pier 69."

"Ecology is committed to achieving and maintaining a healthy environment in our growing urban industrial areas. Our work in the Duwamish, and across the state, focuses in three areas to achieve a heathy environment: cleaning up contaminated sites, managing stormwater and other discharges to prevent toxics from polluting our waters, and locating sources of toxics to prevent them from entering our waters in the first place. Preventing toxics from entering our environment in the first place is an incredibly important part of protecting and restoring Puget Sound. In fact, the Pollution Prevention for Healthy People and Puget Sound Act of 2019 directs Ecology to take action on toxic chemicals in consumer products, to protect human health and prevent toxic chemicals from entering the environment.

There is a great deal of work being done to clean up and protect the Duwamish, by Ecology and others. Storm water runoff and historical contamination of the river and uplands are the biggest pollution sources in the Duwamish. The Clean Water Act permits we have in place for individual businesses, King County, and Seattle are an important part of getting cleaner water. Better technology, education, and technical assistance are also important tools.

In terms of our Clean Water Act work, we are achieving results at the facilities that have water quality permits. Our water quality permits are considered the most protective in the country. Ecology develops, administers, and ensures compliance with these permits to protect Washington's waters."