Scientists want to know how microbes in wastewater flows are affecting the Southern Resident orcas. 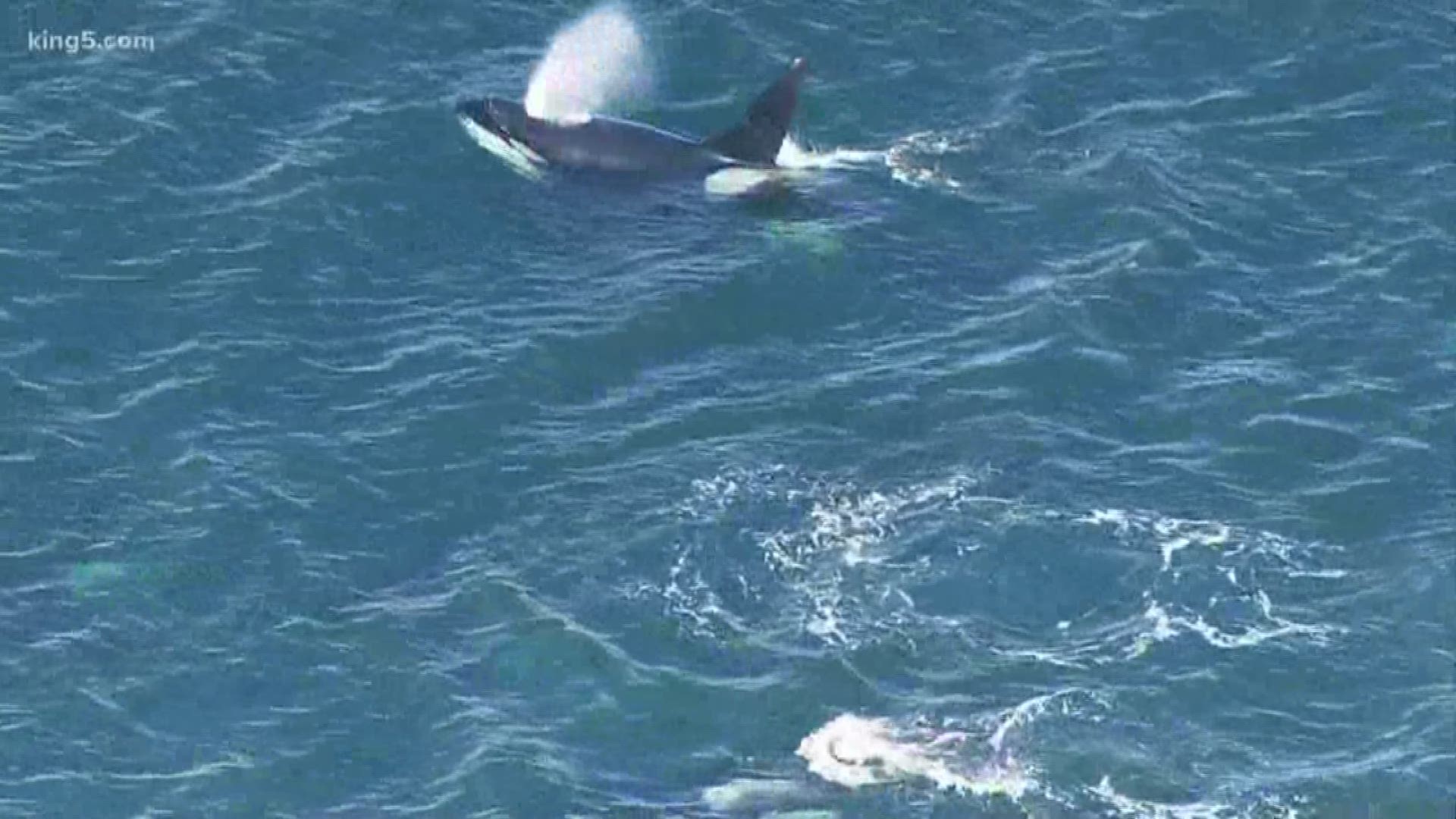 SEATTLE — Wastewater flows into Puget Sound in both treated and untreated forms, and in both, microbes like bacteria, fungus and other parasites make it into the marine environment. Scientists want to know how those microbes are affecting the Southern Resident orcas.

Whenever a Southern Resident killer whale comes up for a breath, it sprays a mist into the air. It's a plume of valuable information that scientists are capturing in containers like this.

"They contain material from their lungs and their respiratory tract and we hope to capture that on this nylon mesh if we are lucky. After that, we will extract the droplets that are stuck to the mesh," said Microbiologist Linda Rhodes.

Rhodes, with NOAA's National Marine Fisheries Service, is part of a team that's trying to understand how the killer whales are impacted by the tiniest of problems, microscopic organisms that are invisible to the human eye.

RELATED: Should seals and sea lions be killed to help save the orcas?

Though lack of food is often a focus of recovery for the orcas, who depend on Chinook salmon which are also dwindling in number, it's possible that disease is making the whales less likely to eat. It could also make them more vulnerable to infection.

"They carry a lot of parasitic worms in their intestinal tract. These particular kinds of parasitic worms, also in salmon, they actually need both the fish and the mammal to complete its life cycle," Rhodes said.

Infectious diseases are a leading cause of death in captive marine mammals. Federal scientists are studying how microbes that may be linked to fecal material may be impacting the health of the Southern Resident killer whales.

Three years ago, 20-year old male L95 was found dead from an infection that started at the site of a satellite tag, and researchers admitted they hadn't followed proper disinfecting protocol.

"It started at the skin and spread to the lungs and we figured out what species of fungus that is. It is a fungus that is a very invasive once it gets inside the animal and it is actually a fungus that also affects humans. When it is in humans, it is a very bad situation," she said.

L95's death showed scientists that infections may be a challenge for recovery of the whales, who often show signs of a mysterious condition called "peanut head" before they die.

Rhodes' team is trying to trace the connection between the health of the whales and our wastewater.

A malfunction at King County's Magnolia treatment facility in 2017 released hundreds of millions of gallons of untreated waste, but even on a rainy day there is a lot of human waste entering Puget Sound and the Salish Sea.

Wildlife, livestock and other animal waste has also been detected from storm water run-off. When rivers rise, animal waste increases. When it rains, human waste is more often detected.

Seattle, Tacoma, and  Anacortes score higher in human waste while waterways around Whidbey and Camano Islands as well as Snohomish County have increased amounts of fecal material from animals.

"Human beings are causing a lot of the situations that are giving rise to the scarcity, the lack of abundance, the lack of vitality and even the diversity, the variety of different organisms that there are in the marine environment," Rhodes said. "It is our responsibility to understand what we are doing because we are the one thing that can change, what we do, how we behave, and how we interact with the ocean system."