The traps have three cones inside, which should only allow the hornet to enter a holding area, but not leave. 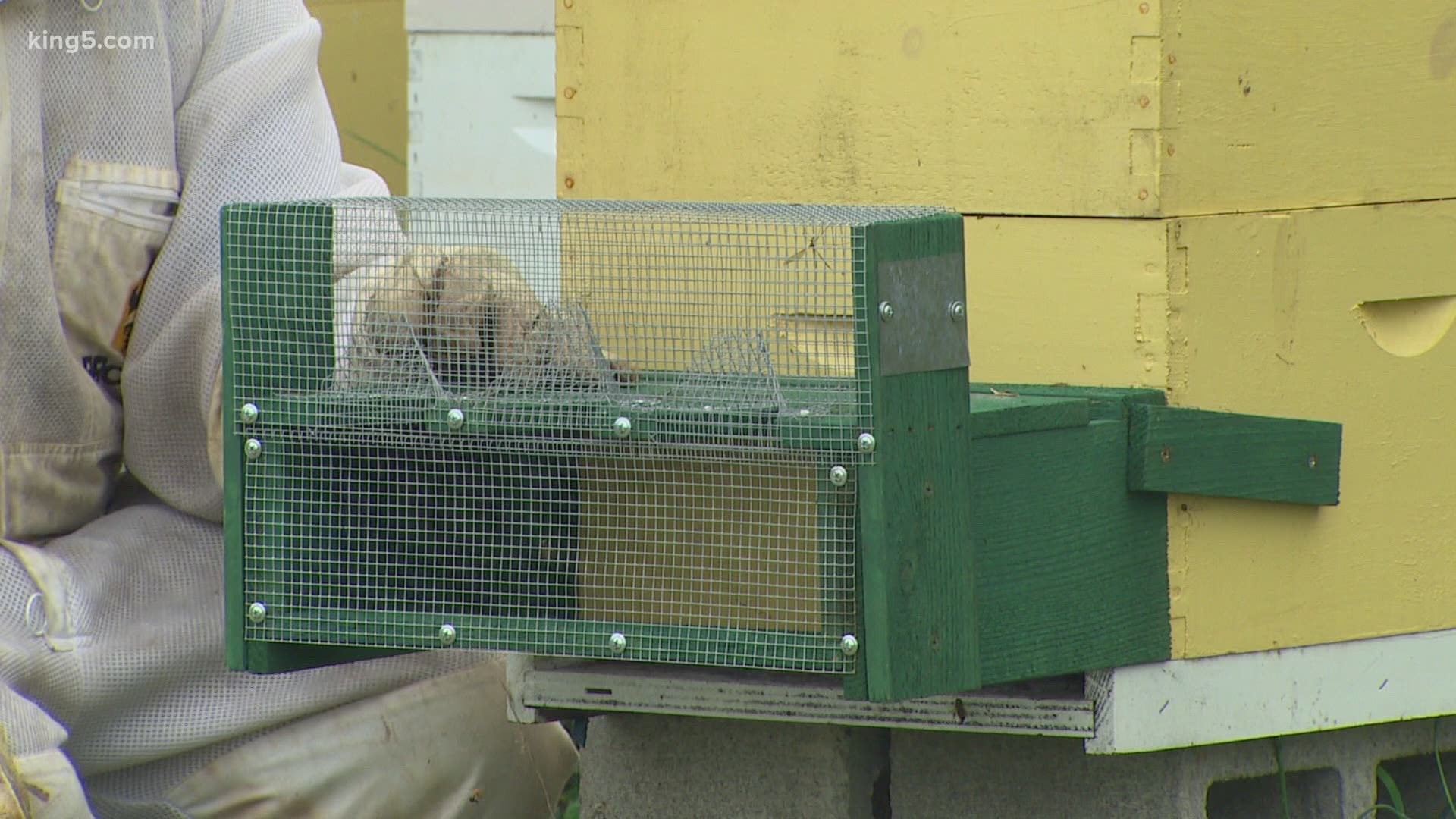 WHATCOM COUNTY, Wash. — Officials in Washington state are continuing the likely years-long process of attempting to eradicate invasive Asian giant hornets from the U.S. At the same time, private beekeepers in Whatcom County are taking their own precautions against the threat.

Ted McFall, a beekeeper with hives near Custer, has installed traps on two hives. The traps are designed to let bees through but keep the larger hornets out.

McFall is especially sensitive to the threat of Asian giant hornets. One of his hives was the target of an apparent hornet attack late last year when the pest was first discovered on U.S. soil. Hundreds of bees were found decapitated outside the hive.

Since no hornets were found there, the attack remains officially unconfirmed, though it fits with the much-discussed behavior of the hornets: attacking beehives in the fall to help meet their high protein needs as they reproduce. In this “slaughter phase,” a few hornets can wipe out huge numbers of bees.

“It gives you a helpless feeling to be unable to protect your bees from something like that,” said McFall.

McFall is hoping to prevent that feeling in the future with the new traps for the hives at either end of his grouping. The contraption has three cones inside, which should only allow the hornet to enter a holding area, but not leave.

But these traps were not able to be tested in the U.S. before now, since live specimens were hard to come by.

“Fingers crossed that these traps will work. Who knows if they’re going to work,” said McFall. “I would love to come up here one day and see a scout murder hornet stuck up here in the top compartment here, that would be fantastic.”

McFall’s traps are similar to five ‘sentinel hives’ placed in the area of suspected hornet nests by the Washington Dept. of Agriculture. The design was adapted from ones in use in Asia, where the hornets are far more prevalent.

“They’re a little bit different. They took some drawings from a publication in the 1970s, and kind of adapted them to the point where they would work,” said Dr. Tim Lawrence, with Washington State University Extension in Island County.

He said the sentinel hives were intentionally selected for weak colonies, in hopes of better-attracting hornets for capture, and tracking back to the nest.

Still, he doesn’t see them as a silver bullet for the hornet problem, mostly because of the matter of scale.

He said while the pass-through appears to have only a small disruption on the bees’ flight, the other problem is the hornets eventually wise up to the trap, lurking on the side to catch bees exiting.

It’s why the state Department of Agriculture is still focused on eradicating the hornets by capturing some live and using radio trackers to follow them home. The department had its first success there recently, tracking and identifying a nest in a tree near Blaine.

Teams in spacesuit-like garb then wrapped the tree in plastic and suctioned hundred of hornets out, including two queens, before removing the tree.

McFall hopes these efforts continue to be successful.

“At the end of the day, that’s the only thing that’s going to solve this problem is finding the nest and killing the nest,” he said.

In the meantime, the mesh contraptions are a sliver of comfort for him and his bees.

“Hopefully it will work. [It] may not work, I have no idea,” he said. “But everything else, I have control to keep them alive.”

WSDA says if you're a beekeeper and notice a hive under attack by Asian giant hornets, please don't intervene. Instead, call their hotline at 360-902-1880. More information is available here.