Ocean acidification: The threat to Washington shellfish, and how the industry is adapting

This effect of climate change threatens the Pacific Northwest ecosystems that shellfish and local growers rely on. 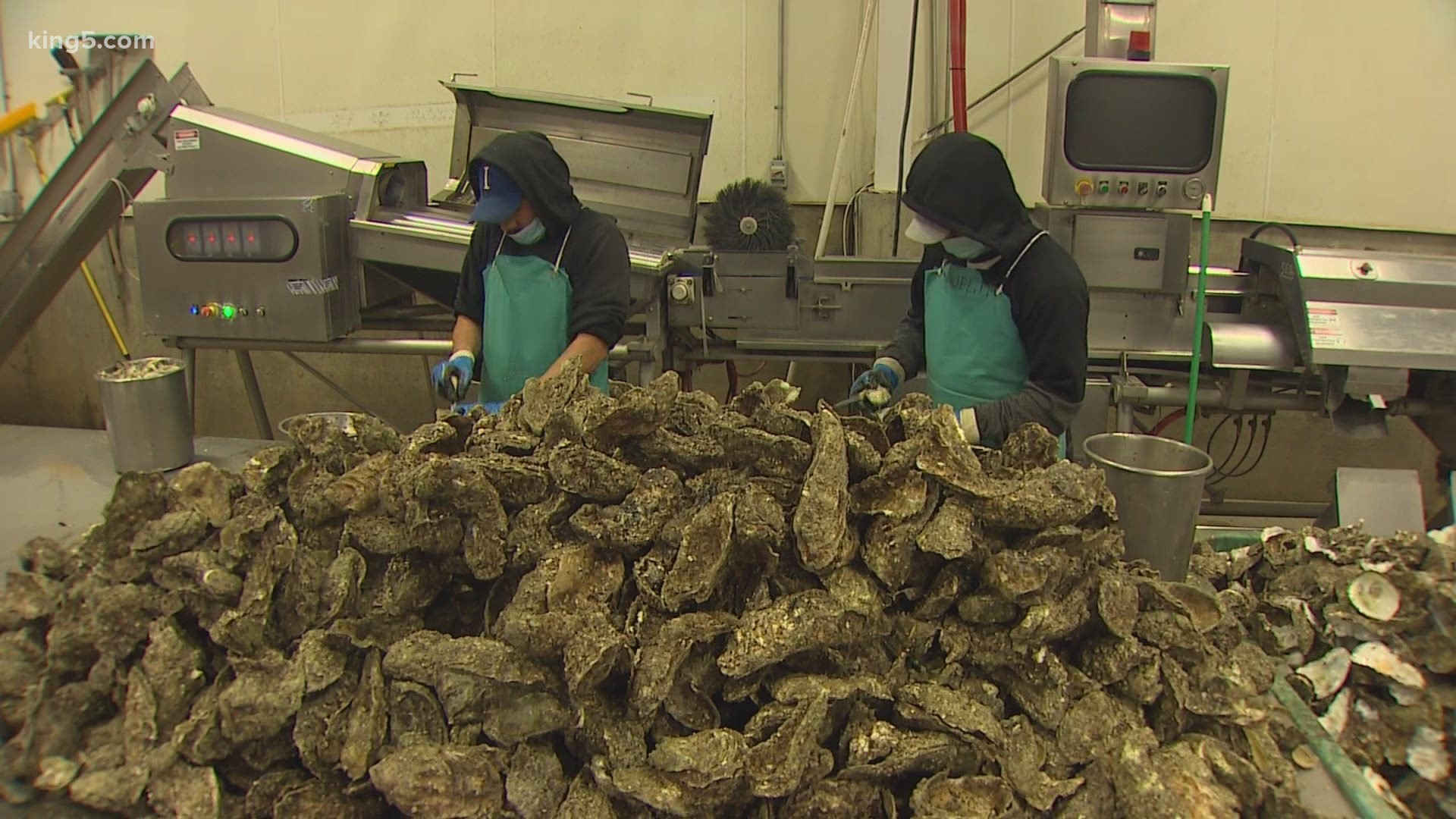 PACIFIC COUNTY, Wash. — Puget Sound and the Pacific Ocean have always held opportunity for Washington state, with rich waters full of abundant fisheries. But that close connection also exposes the state’s economy to the growing effects of climate change and chemical changes in the water, including ocean acidification.

Ocean acidification is the product of increased carbon dioxide in the atmosphere. When absorbed by ocean water, it becomes carbonic acid and lowers the water's pH, making it more acidic. Compounding the issue on the West Coast is a phenomenon called "upwelling," where currents hit the shore and push the acidified water up from deep below the surface.

The non-profit Natural Resources Defense Council says the Pacific Northwest is at high risk for economic harm from ocean acidification. The state convened a Blue Ribbon panel on ocean acidification that published its first report in 2012, and an update in 2017.

Ocean acidity has risen 30% since pre-industrial times, and the trend continues. Of new concern — research that shows acidified water can damage the sensory organs and shells of Dungeness crab, the most valuable fishery industry on the U.S. West Coast.

But that threat to shellfish expands beyond crab in Washington. Here, the commercial shellfish industry generates $270 million annually and employs thousands of workers.

The industry is also no stranger to issues of acidification. About a decade ago, producers faced catastrophic losses from an Oregon hatchery collapse. The tiny larvae were not able to survive the harsher conditions.

It was a wake-up call, said Kathleen Nisbet-Moncy, the chief operating officer at Goose Point.

“We were the canary in the coal mine,” she said. “We were the first to get hit, and really raise the issue to light.”

It forced Goose Point to adapt, too. Now, Goose Point spawns Washington oyster larvae at a facility in Hawaii, before bringing them to Willapa Bay to grow, and eventually be harvested.

But Nisbet-Moncy admits, it’s a solution that is not accessible to all producers.

Ocean acidity is known to be a threat to many aquatic inhabitants, but there is still much to learn about this climate change impact. A new research expansion from the University of Washington hopes to close that knowledge gap.

Riser’s team recently received part of a $53 million dollar grant from the National Science Foundation to build several hundred new sensors. These ocean-going robots, which look a lot like torpedos, are deployed in waters around the planet.

There, they spend years in a cycle: sinking deep to collect data on conditions, and rising to the surface to transmit that information home.

Riser said it’s important to better understand how acidity and other condition vary by depth and location.

"Unlike the atmosphere, there's no way to really observe the ocean away from the coast," Riser said. "So as we fill the ocean with these, they give us a way to see the ocean in real-time anywhere."

“We live on land, so when we think of climate, we think of what is happening right here around us,” he said. “But 70% of the earth is covered by ocean, and the ocean has a much more profound effect on the climate than the land does. Water can evaporate, land can’t really evaporate.”

Ocean acidification has the potential for serious impacts in Washington, which farms more shellfish than any other state. Because of that, the state Department of Ecology is undertaking new efforts to better understand the prevalence of the issue, and recently outlined the impacts of ocean acidification, contributing data to the annual Marine Waters report.

Micah Horwith, a senior scientist with Ecology, discussed those specific impacts — from shellfish struggling to form shells early in life, to salmon losing their ability to smell out predators.

“That in some way is going to cause chaos in our ecosystems,” he said. “Some species are going to suffer, others may do better. But it’s going to produce an ecosystem that looks very different than we have now.”

At the core, he said, this human-introduced chaos compounds on systems already stressed by other factors — warming, reduced oxygen, toxic chemicals and the artificial "armoring" of shoreline.

"Together, all these issues are changing at the same time, and to me, that's what makes action urgent," he said.

He said that's good enough reason to limit future emissions, and while Washington can't accomplish that on its own, he hopes the state continues to lead on the issue.

Back at Goose Point, where crews shuck and pack a mind-boggling number of shellfish a day in a fast-paced blur, the business has adapted. But Nisbet-Moncy is still concerned by the economic threats of ocean acidification and climate change.

“While in the short term it’s been fixed, we’ve always got to be monitoring what the long-term solutions are, as we’re on this conveyer belt of change over the next 100 years,” Nisbet-Moncy said.