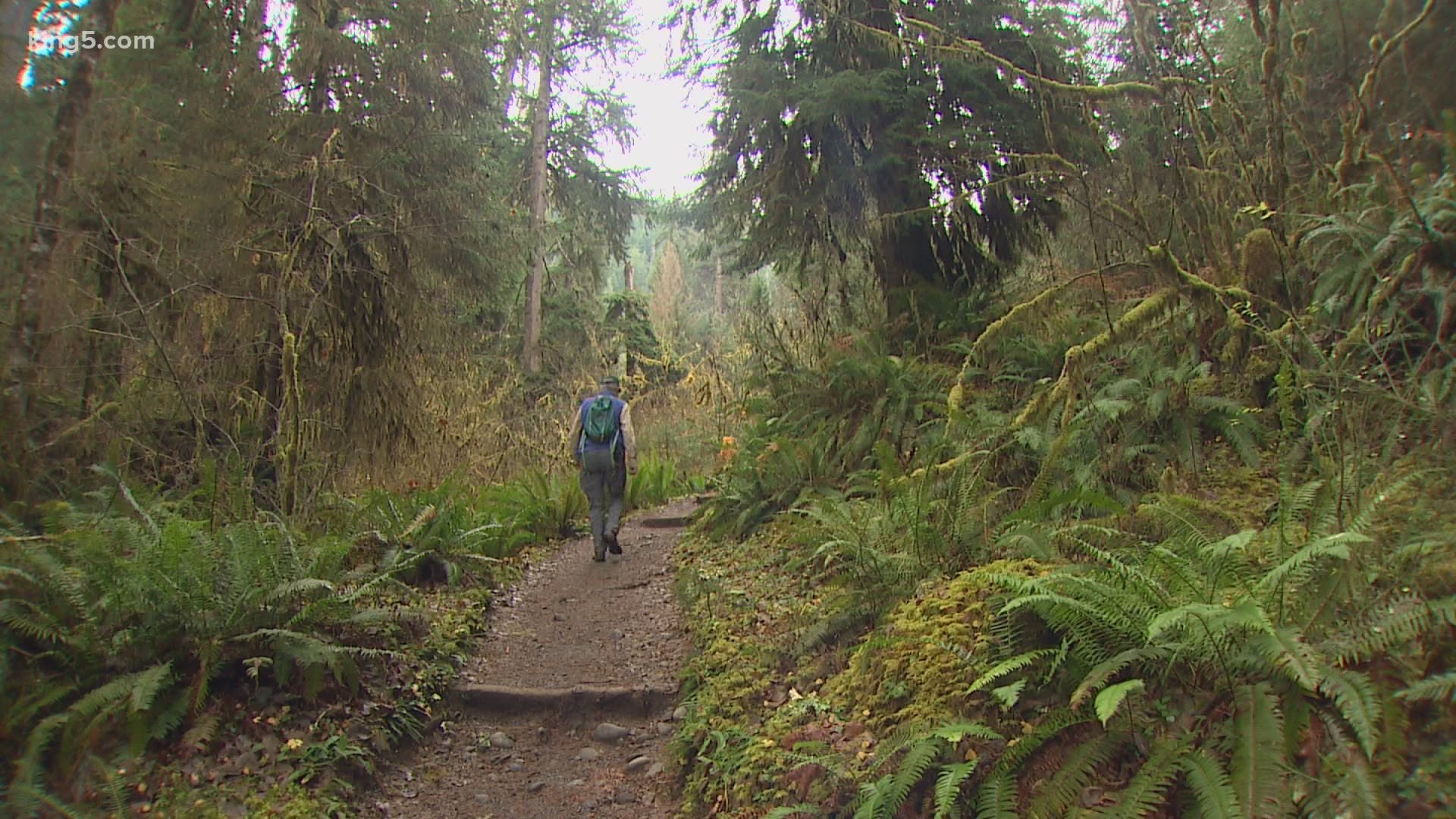 FORKS, Wash. — One of the quietest places in the United States may not be so quiet anymore, and advocates hope to reverse that trend. Adding to that discussion are two new studies that look at the reach of Navy aircraft noise on the Olympic Peninsula and underwater.

“It’s peace and quiet,” Smith said. “Extraordinary peace and quiet. What’s a shame is there are very few other places in the U.S. where you can get it.”

On a trip to the Hoh River Trail, hikers travel hours to bathe in that feeling of silence. But new research shows that silence is often interrupted, thanks to the Navy’s EA-18G Growlers that train in the Military Operations Area (MOA) above.

In the Hoh Rain Forest, that meant several audible flights in just a few hours on a recent weekday.

At issue is an expanded presence of Growlers based at Naval Air Station Whidbey Island. In 2019, the Navy added 36 of the electronic warfare aircraft to the air station, bringing the total to 118. That growth, compounded by the lower, distinctive rumble from the more powerful jet that the replaced the aging Prowler, has led to complaints from some living nearby, and lawsuits from residents and the state of Washington.

RELATED: Washington’s Hoh Rain Forest: A beauty and a beast

For Smith, each jet passing nearby in the national park sounds like a moment interrupted.

“It feels like you came all this way in order to experience this, and someone else decided you’re not going to have that,” Smith said.

Two new studies take a look at the reach of noise from Navy aircraft, both authored by Lauren Kuehne, a University of Washington researcher now turned consultant.

In “Military Flights Threaten the Wilderness Soundscapes of the Olympic Peninsula, Washington,” published in Northwest Science, Kuehne and co-author Julian Olden (Professor at UW's School of Aquatic and Fishery Sciences) used wildlife audio recorders to capture the noise from aircraft.

The results are striking.

The paper found 88% of noise came from military flights, and the majority of those flights were identified as Growlers. Some flights were captured at 82 decibels, near the threshold for hearing protection.

“I think the bigger finding is we found the noise is very chronic,” Kuehne said. “It’s pretty much every day, it goes on for many hours during the day. A typical resident or visitor, they’re going to experience about an hour of noise over a six to eight-hour period.”

Now, she and Olden are doing a further study of noise on Whidbey Island and believe more monitoring is necessary to better understand how people and animals experience this sound.

The other paper, “Above and below: Military Aircraft Noise in Air and under Water at Whidbey Island, Washington” published in the Journal of Marine Science and Engineering, examines sound in the air and water closer to the base.

The standout finding: a hydrophone placed near a runway captured noise at levels known to alter the behavior of wildlife at 100 feet deep. That raises concerns for fish and marine mammals, the study author said, including the endangered Southern Resident orcas. They call for further study of the impacts on wildlife.

Rob Williams, the Chief Scientist at Oceans Initiative, was a main designer of the Whidbey Island study, and second author Christine Erbe at Curtin University did a majority of the noise analysis.

The Navy said it does not dispute the data gathered but takes issue with some of the conclusions. They believe noise data from so close to a runway doesn’t reflect the majority of Growler operations and want more evidence that aircraft noise can impact wildlife as suggested.

RELATED: US House approves noise monitoring of Whidbey Island base

Still, Capt. Matt Arny, commanding officer of NAS Whidbey Island, said they are hoping to mitigate some of the acoustic impacts. He pointed to a recent change to the “canned” default flight plan for Growlers, which was imposed because of FAA needs, but could be potentially helpful on the noise issue.

“We have changed the transit routes to go in and out of the Strait of Juan de Fuca, which does mitigate some of the noise over the national park as we’ve transited,” Arny said. “But it also alleviates noise concerns for some of the community out there.”

The Navy is also exploring modifications to reduce the noise of the aircraft, Arny said.

But Arny admits, they do not expect this to eliminate Growler noise for nearby communities, or in the Hoh Rainforest. He said they are very aware of the feedback on noise from community members, and currently undertaking a monitoring study that includes an audio sensor in the Hoh.

But, Arny did not expect a systemic change any time soon. Some wilderness advocates have floated the idea of the Navy training in different areas while basing at Whidbey Island. Arny called such a plan unlikely, either because it adds too much transit time for the planes or would be too difficult to find appropriate airspace for their maneuvers.

But the impacts of the expanding Growler presence are being felt. Gordon Hempton, founder of “One Square Inch of Silence,” in the Hoh Rain Forest, a symbolic spot of preserved quiet marked by a rock, said the place no longer qualifies as a quiet preserve because of the flight noise.

That’s one of several reasons the NPCA hopes the Navy will consider alternatives or further compromises to protect the natural soundscape of the Hoh and Olympics.

“We can do better,” Smith said. “We can restore the natural quiet here because the Navy jets have other places they can train. It’s important they do that training, but there’s only one place like the Hoh.”

Kuehne hopes her research will lead to further examinations, including an in-depth public health study of noise impacts for those living closer to the air station on Whidbey Island.

"Noise is not going away," she said. "As our economy grows, as our activity grows, we'll always have noise that comes with it, and that noise will continue to impact people."

"We’re making choices and it’s not like the noise is 'OK' or 'not OK,'" Kuehne added. "It happens across this continuum, and we as a community, as a society have to decide what are the things that are reasonable to ask people to bear.”