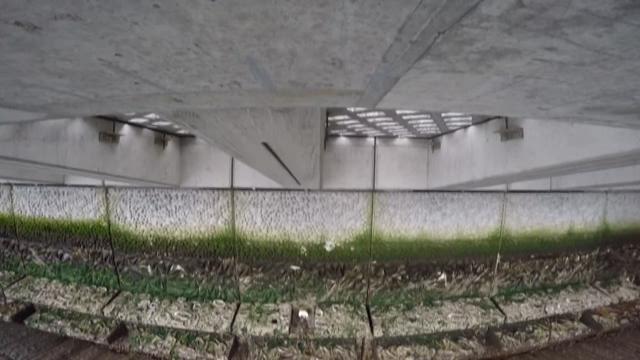 If you walk the area from Colman Dock to the Seattle Aquarium, you’d notice glass panels lining the sidewalk.

“I thought it was just something to make the pier pretty,” said Emily Fuller, who visiting Seattle with her family.

The panels actually form a light-penetrating sidewalk to make the waterfront more fish-friendly, specifically salmon coming from the Green-Duwamish River into the Sound.

“Juvenile salmon don’t like to go into the dark so hopefully it will allow them to move along the shoreline naturally,” said Jeffery Cordell, a University of Washington research scientist and lead author of the aquatic research of the paneling.

“Glass blocks let light down and it’s an improvement that’s supposed to make it better for the fish,” said Cordell. “Letting light down so that little organisms that the fish feed on can grow.”

Most seawalls are straight concrete slabs. The new seawall features underwater structures aimed at added more sea life and invertebrates that act as food for juvenile salmon, which was based off research Cordell did from 2008-11. Cordell notes rocky wall textures and a “mattress” of rocks making the area shallower are a part of the new seawall as well.

The UW researcher said he’d already heard from cities around the world, including Sydney and Vancouver.

“Nothing like this has even been done before,” he said.

Cordell and other researchers will start decade-long study next year, in a partnership with the Seattle Department of Transportation.

1 / 7
<p>Glass blocks allow light to filter through the seawall to the water below.</p>