The lingering impact of last weekend's March Point protests in Skagit county is not what activists planned on. 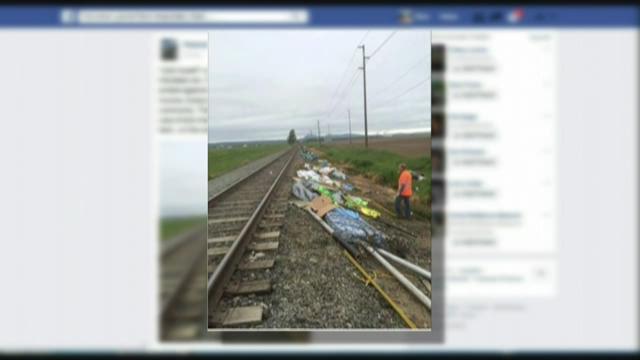 MOUNT VERNON -- The lingering impact of last weekend's March Point protests in Skagit County is not what activists planned on.

They staged multiple demonstrations against fossil fuels. Despite their environmental message, some in the community are accusing them of leaving behind more than a ton of trash at the Burlington Northern railroad tracks near Farm to Market Road.

A Facebook photo of the debris left behind triggered a lot of finger-pointing.

"They are hypocrites," wrote one person.

"They should be arrested for dumping and littering and fined," wrote another.

Norman Dahlstedt, whose property borders the railroad tracks wasn't shocked by any of it.

"None of us want to harm the environment. But what they're doing is causing a lot of problems," said Dahstedt.

Of all of the locations where demonstrations played out last weekend, authorities say they had no reports of problems with trash except the BNSF tracks where activists camped out, staging a protest.

On Sunday morning, police gave the activists a warning to clear out or face arrest. Some grabbed their belongings and left but others continued with their civil disobedience.

"Anything that was left on the railroad tracks, it was trash and debris, items people chose not to claim," said Skagit County Public Information Officer Bronlea Mishler.

The activists tell a much different story.

Barnes insisted they had every intent of removing their belongings after the arrests, but weren't allowed.

"They were barred from returning, and it was represented to them it was not a worry because their stuff was going to be taken care of," Barnes said.

Whether you look at it as belongings or trash, Skagit County Public Works said there were 2300 pounds of it. Workers hauled it off to the transfer station and disposed of it.

The activists say those items were valuable gear, camping equipment and clothing they never wanted to leave behind.

"The fact that we would randomly throw stuff up and leave it there, it just ain't right," said Barnes.

Burlington Northern estimates of all the protesters' belongings out on the tracks last weekend about ten percent was left behind.