Forage fish are often indicators of change in an ecosystem. They can also cause a ripple effect throughout the food web when their populations fluctuate. 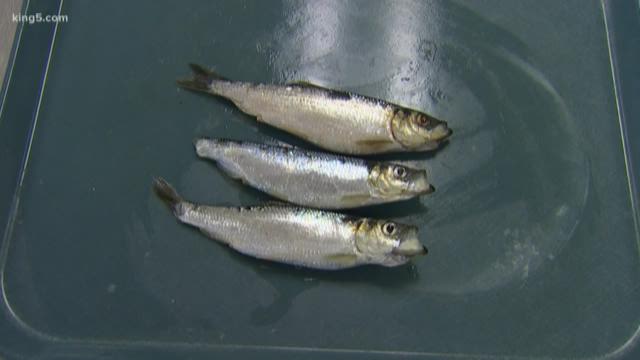 The decline of Southern Resident Killer Whales gets a lot of attention, and it's mostly blamed on the disappearance of their favorite food: Chinook salmon.

And one group of scientists at the Washington Department of Fish and Wildlife is looking past Chinook at smaller fish that are often overlooked by headlines.

"Chinook salmon, orca, seals, birds - all of these species depend on forage fish," Dayv Lowry said. "When they start to decline, and we start to see these indicators of poor health, now everybody really worries about them especially because so many other species rely on them."

Forage fish are often indicators of change in an ecosystem. They can also cause a ripple effect throughout the food web when their populations fluctuate.

While a couple areas of Puget Sound have seen herring increase, the fish have nearly disappeared from some spots south of Tacoma.

To figure out why, researchers are collecting the fish to record sex and size. They also remove scales to look at under a microscope, counting them like rings on a tree to track age and growth rate.

"Looks like this is one, two, three, four years old," Adam Lindquist said.

For years, research focused on herring caught closer to shore, along with their eggs. Now the study's expanding further out into Puget Sound to include a variety of forage fish. It examines how the fish are faring when not spawning, checking to see whether the fish are dying before they're ever old enough to reproduce.

The Cherry Point herring stock has declined since its peak in the 1970s. While there was once as much as 15,000 tons of spawning adults, scientists recorded a record low of only 372 tons in 2017. That is a 98 percent decline in biomass.

The Squaxin Pass stock, however, has remained at relatively constant, low levels over this same period.

"The biomass of the "Other Stocks Complex" (the other 18 stocks in Puget Sound all lumped into one genetic pool) has fluctuated substantially over time and is sometimes unduly influenced by one or two strong stocks. While there has been a slight overall downward trend in this Complex, the last few years the Quilcene Bay (northern Hood Canal) and Semiahmoo (near the Canadian border) stocks have been rapidly expanding. In 2016 and 2017 the Quilcene stock made up over 50 percent of the total herring biomass in the Sound," Lowry said.

Forage fish don't decline or succeed in unison. Their health appears to be determined by factors that change depending on where they live.

That's why new funding in 2015 was so crucial. It's allowed for increased sampling of different species in areas further from shore in order to answer complex questions in a more thorough way.

"How fast do these fish grow, where do they live, where do they survive better than others? What this really helps us do is target our management," Lowry said. "So, the question over the past several years is, why are there some winners and some losers in that game? Why do we have some stocks that are doing so well while others are doing so poorly?"