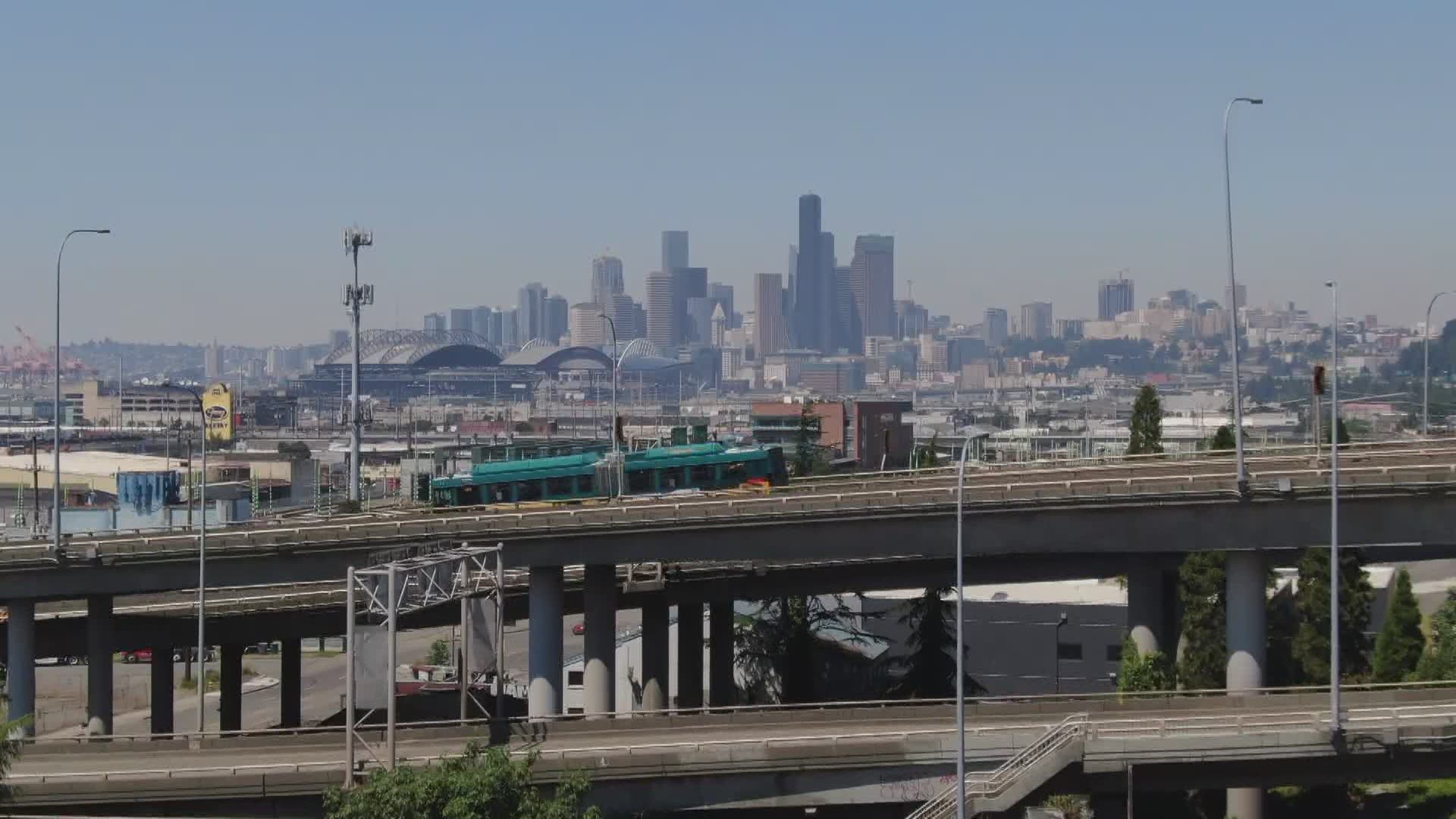 SEATTLE — Monday marked another day of record heat in the Northwest, with plenty of problems to go around.

The weather station at Sea-Tac Airport recorded a high of 108 degrees, a new all-time record.

As officials opened cooling shelters for people, impacts on infrastructure began to pile up as well.

Sound Transit slowed Sounder and Link light rail trains, citing the extreme heat. High temperatures can cause rails to expand, the agency said, and can even cause overhead power supply lines to lose tension.

The city of Seattle is also spraying several steel draw bridges with water to keep them cool. Heated and expanding steel could create problems for the opening and closing mechanisms.

I watched the Fremont Bridge get a cold shower this morning and it made a pretty rainbow. 🌈 @seattledot #seattleheatwave #wawx pic.twitter.com/Q9Z3xETSrw

The Washington State Department of Transportation (WSDOT) had another heat headache – sections of pavement on Interstate 5 buckling.

“Heat expands the concrete. They push up against each other, heave up and create a large bump,” said Morgan Balogh with WSDOT.

That requires crews to close lanes for repairs, causing delays. WSDOT kept crews on standby through the weekend to speed response times as issues emerged from Tukwila to the Canadian border.

At least four buckling repairs were underway during the Monday evening commute on I-5, WSDOT said, with another on I-90 near North Bend. The department dealt with at least seven incidents of pavement buckling over the weekend.

Extreme weather like this heat dome is influenced by human-caused climate change. Experts sometimes compare this to "loaded dice": outlier heat chances have always existed, but climate change increases the likelihood of an extreme event and lowers the chances of unseasonably cool weather.

The warming planet has led some cities to pursue climate-resilient infrastructure: systems designed to operate in a changed world.

“If we just look a climate change, there are a lot of different things,” said Prof. Steve Muench, who teaches civil and environmental engineering at the University of Washington. “What I think you would call climate stressors, you know, things that happen in the climate that can put stress on infrastructure.”

Among those is the buckling issue Washington has seen this week. He said that’s one example of how cities may have to adapt to the warming planet. Roads can be built to better tolerate warmer temperatures but come with varying costs and tradeoffs.

“Yeah, absolutely,” Muench said. “And so we have to think carefully about how that adaptation happens. And honestly, you know, part of it is the engineering stuff that I study on a day-to-day basis, like materials and equipment and stuff like that. But let's be frank, right? The biggest adaptations to happen are people. If people are willing to do this and willing to put the money out for it.”

But until humanity can control climate change, he expects cities to look to adapting to a warmer world in years to come.

“Well, from my point of view, as someone who deals with infrastructure and teaches it all the time, we'd be fools not to think that way, right?” Muench said. “You have to prepare for what you think is coming. And to me, that's the best estimate of what's coming. So you can stick your head in the sand and hope it doesn't happen. Or you can practically go after it.”