A debris flow deposited several feet of sediment in parts of Mount Rainier National Park on Monday. There was some damage to Westside Road and Tahoma Creek trail. 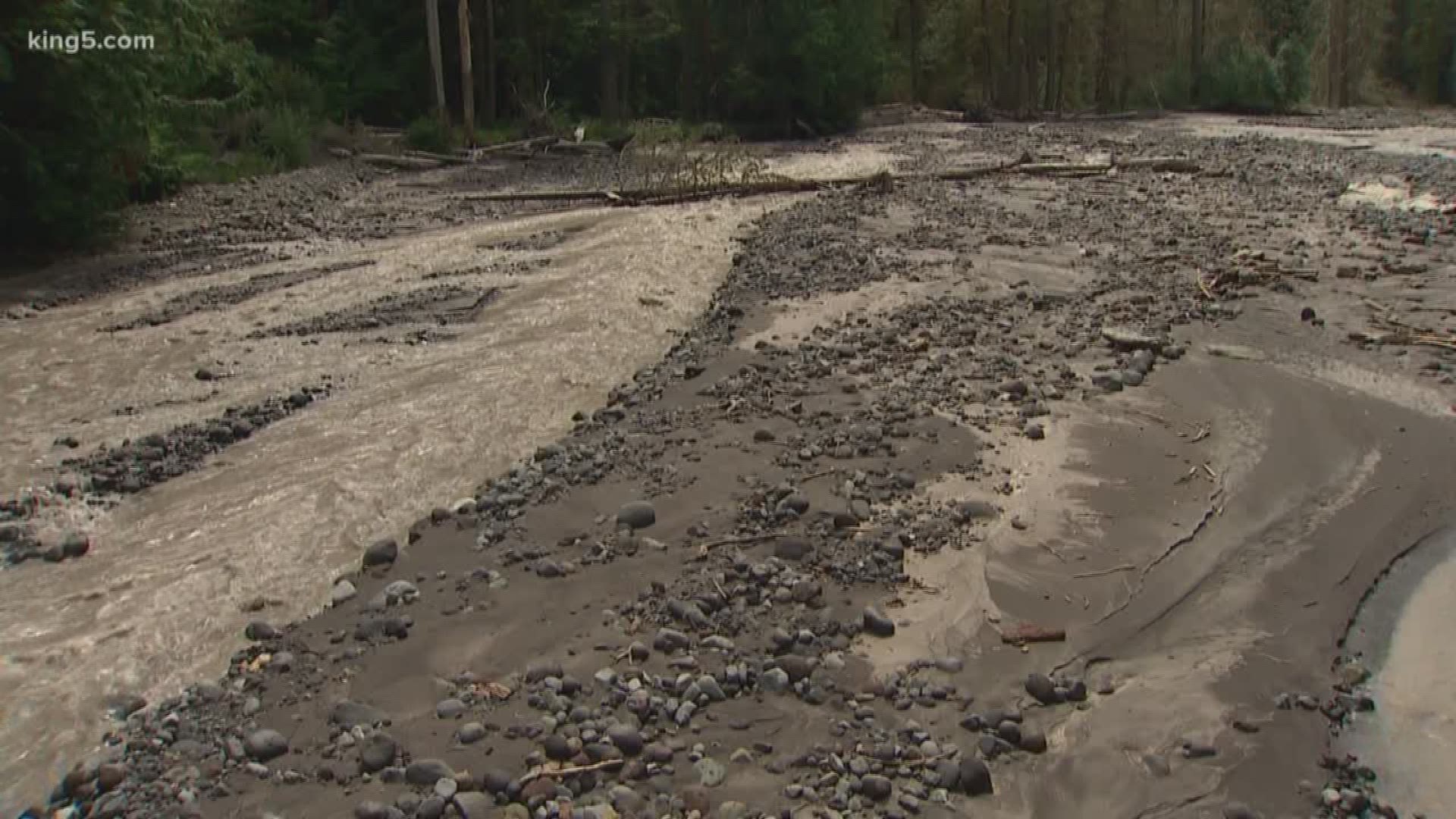 A debris flow that moved down Tahoma Creek at Mount Rainier National Park has temporarily closed the park’s Westside Road.

The flow, which carried mud, sediment, and rocks downstream, happened Monday between 6:48 p.m. and 7:58 p.m., according to Mount Rainier National Park.

It was triggered by a sudden change in the outlet stream of South Tahoma Glacier, which caused water to surge inside the glacier and turn into a debris flow as it picked up silt and boulders.

"It's not uncommon for debris flows to float boulders the size of a vehicle," said park geologist Scott Beason.

Credit: National Park Service
A debris flow is believed to have started at the terminus of South Tahoma Glacier in Mount Rainier National Park. This photo shows two primary outlet flows; the left flow is likely the source of the debris event on August 5, 2019.

This flow may also indicate more events in the upcoming days and months, according to the national park.

Park staff discovered the flow Tuesday morning when Tahoma Creek appeared sediment rich. Photographs from the national park show that the flow deposited as much as five feet of debris near the old Tahoma Creek trailhead and cut away as much as 12 feet of land creating a channel. Another channel just above the barrel curve on Westside Road was filled with up to six feet of bouldery debris.

There was some damage to Westside Road and the Tahoma Creek trail, which forced park staff to temporarily close the road. However, park staff believes revetments along the road prevented significant damage to the roadway. There isn’t expected to be any damage outside the park.

Beason said barring another flow, they hope to reopen the road early next week.

Credit: National Park Service
A channel just above the barrel curve on Westside Road was filled with up to six feet of bouldery debris during a debris flow at Mount Rainier National Park on August 5, 2019.

The national park said all visitors and staff were accounted for.

Debris flows are not uncommon during hot weather, according to Mount Rainier Acting Superintendent Tracy Swartout.

These flows, along with glacial outburst floods, which occur when a large amount of water is abruptly released from a glacier, happen with “some regularity” in rivers that drain into the park’s glaciers, according to park officials.

It isn’t completely known why glacial outburst floods happen, but geologists said they are associated with slow-moving ice on the lower part of the glacier and faster moving ice on the upper portion.

There have been at least 32 outburst floods and debris flows in the Tahoma Creek valley since 1967, according to the national park.

Beason noted the park service does not call Monday's event a lahar.

"Debris flows are pretty common," Beason said. "We see them every 1-2 years or so on average. When you look at the deposits of a debris flow and deposits of a lahar, they look similar, but in the park service, we define a lahar as a massive sector failure or volcanically-induced failure. So [a lahar is] a much, much, much larger event that would go well outside the park boundary and affect many people."

Park visitors are urged to stay alert for changes in water levels, unusual sounds, or shaking ground. If visitors see rapidly rising water or hear a roaring sound, they should move to higher ground at least 200 feet above the bottom of the valley - even if that means going off-trail to do so.

RELATED: What do you know about lahar? Pierce County wants to find out