10 deer reported dead on San Juan Islands: a virus could be to blame

Deer found foaming and frothing at the mouth have officials pointing to a virus, though it poses no threat to humans. 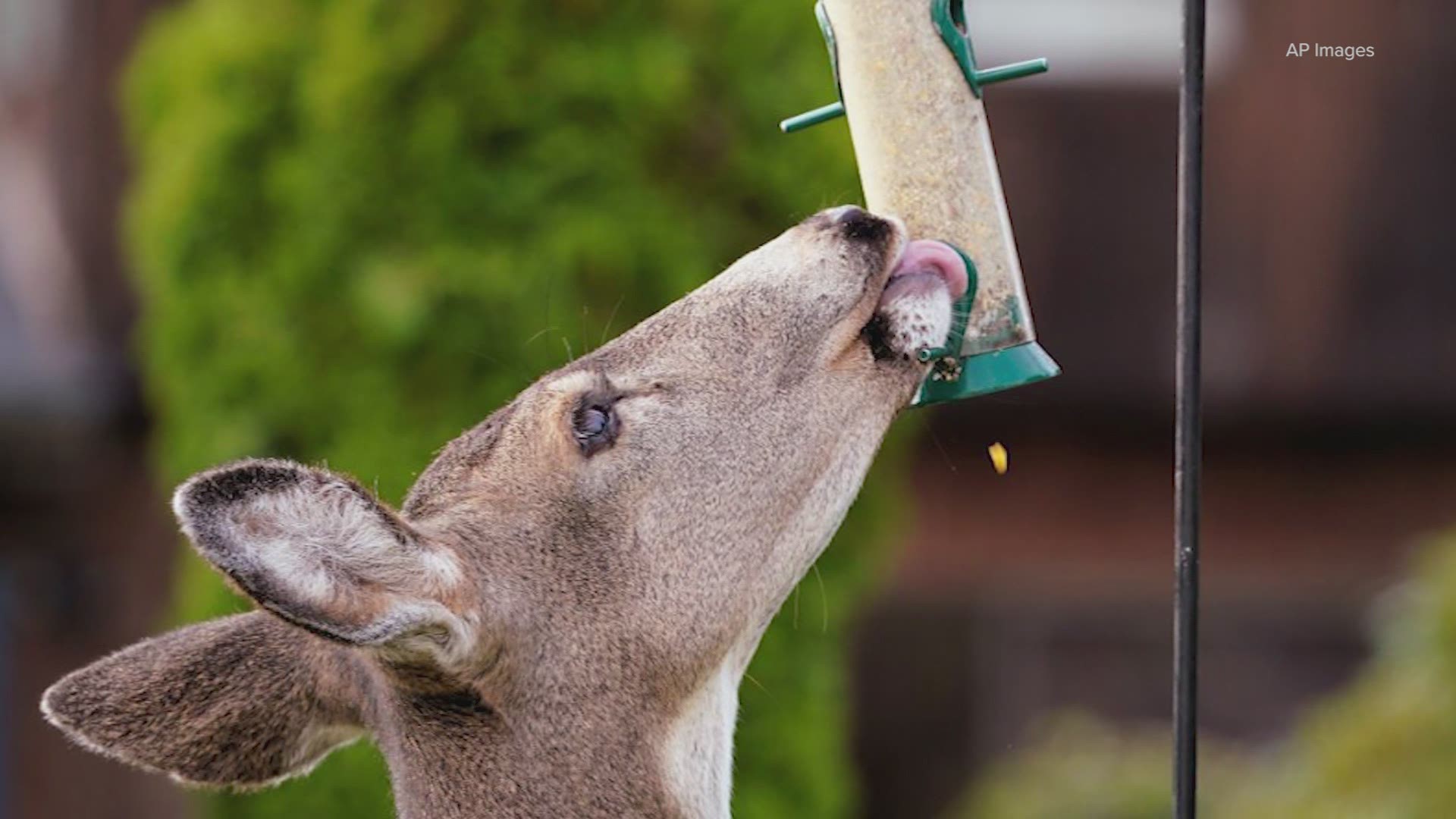 ORCAS, Wash. — State wildlife officials are investigating a cluster of dead deer in the San Juan Islands, which are believed to be linked to a virus.

The San Juan County Sheriff’s Office posted earlier this week that it had responded to a report of dead deer on Orcas Island with no obvious signs of injury. The office said as many as 10 had been reported, but that was an approximate number. Some had white foam around their mouth and nose.

Though the Sheriff's post said Washington Fish and Wildlife theorized lawn treatments were to blame, WDFW state wildlife biologist Dr. Kristin Mansfield said that was a highly unlikely prospect. Instead, she believes it to be cervid Adenovirus Hemorrhagic Disease (AHD).

She said a vet on Orcas Island reported numerous calls of deer foaming and frothing at the mouth, and conducted a necropsy at WDFW's direction.

“That was the first thing that came to mind,” Mansfield told KING 5. “And when the veterinarian’s staff did the necropsy on the deer, we did find what we would expect to find in a deer that had died of adenovirus, the frothiness in the windpipe, and the fluid in the lungs, and the bleeding or hemorrhage on the surfaces of internal organs.”

AHD can be deadly in deer but poses no threat to humans, pets and livestock. It was first documented in Washington in 2017 in Klickitat County.

Mansfield also said it would not surprise her if AHD was spreading in the San Juans, as neighboring British Columbia recorded its first outbreak among coastal deer on Vancouver Island in 2020.

WDFW said there is no risk from consuming meat from a deer with AHD, but disposable gloves are recommended when handling any wildlife carcass. Conversely, officials in British Columbia are recommending people not consume meat from animals found dead, or acting obviously ill or strange prior to death after the AHD discovery.

Shannon Hawkins, who lives in Friday Harbor on San Juan Island, said she recently found a deer dead at the end of her driveway and noted the froth around its mouth.

“It was a little bit sad because I figured it was one of the ones that hung around my yard,” she said. “Then I kind of wondered what kind of disease it might have, what kind of contact it might have spread in the neighborhood.”

She said a crew from Friday Harbor quickly removed the carcass when she reported it.

Mansfield said AHD spreads between deer, but it’s unclear if it can spread through other vectors like bug bites or on surfaces carried by humans. She said if possible, bury and dispose of a dead deer near where it was found, to prevent further transition. Further, help avoid animals coming into close contact by removing artificial food and water sources.

“If people are feeding deer right now, it would probably be good to stop feeding the deer to not concentrate them and bring them all together where they're going to be able to transmit this disease between themselves,” she said.

Testing is underway at Washington State University to confirm the adenovirus theory, with results expected next week.

“I just hope they find the cause and maybe can prevent more of these deer from dying,” Hawkins said. “It's very sad to see them do that.”