Fires and smoke are sometimes called the "new normal" of climate change in the Northwest. But some hope these events will be yet another wake-up call. 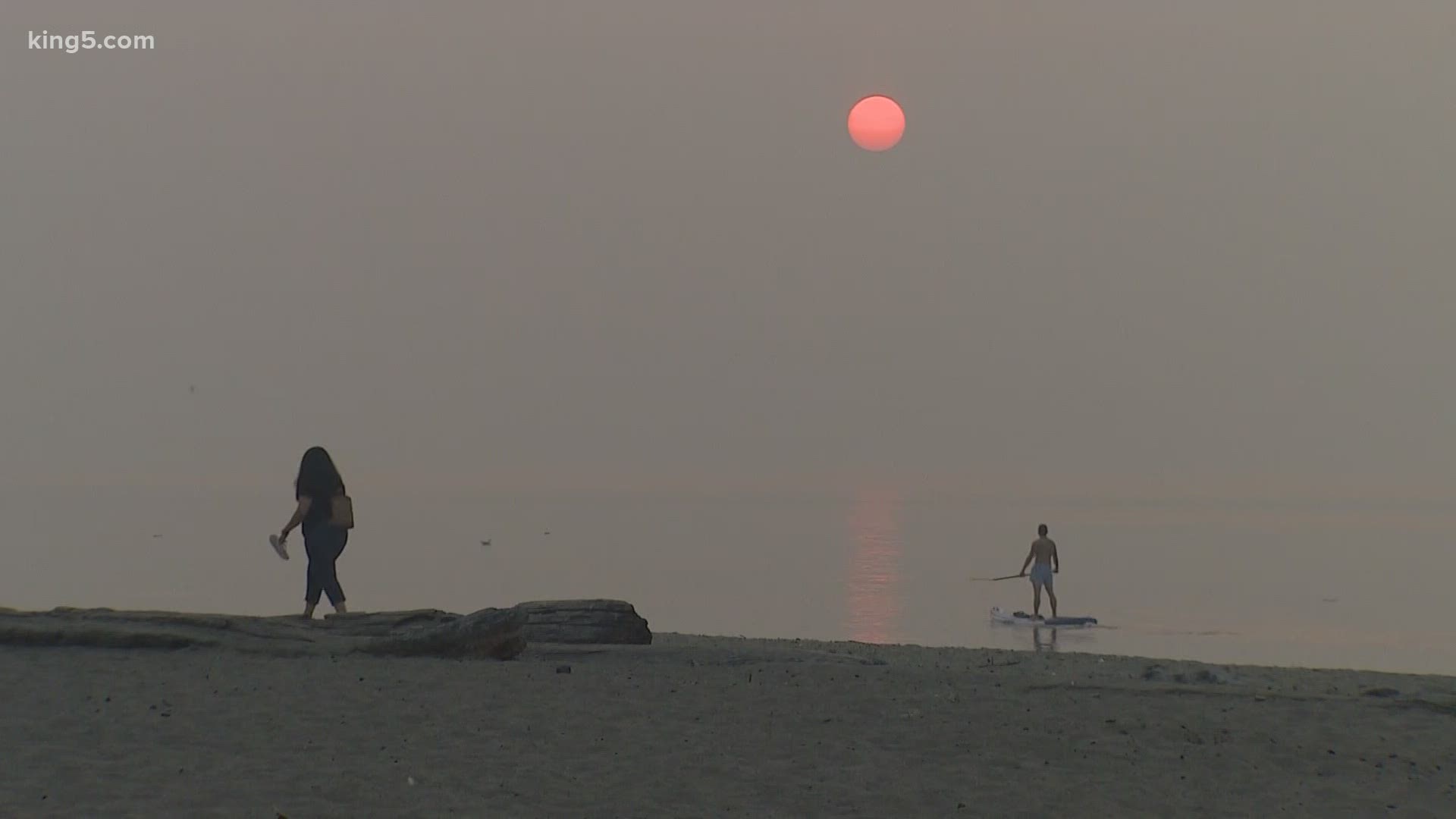 SEATTLE — Seattle is in a haze — socked-in by a “super-massive” cloud of smoke, as forecasters called it, from huge wildfires in Oregon and California.

The cloud caused air quality to plummet Friday. It was "very unhealthy" in some places, and as bad as "hazardous" in areas around Puget Sound.

The state Department of Ecology has an updated map on its website.

Air quality is expected to worsen Saturday, before improving Sunday.

The thick smog blotted out the Seattle skyline from as close as Gas Works Park.

“It looked like that a couple a years ago when we had that really bad smoke,” said James Wiley, walking through the park to dinner.

It's the second time in two years that the city has been smothered in wildfire smoke, and observers say it should be an environmental wake-up call.

RELATED: Seattle air among world's worst: How to check your town's air quality and protect yourself from wildfire smoke

The air quality is part of what city and county officials called “dual crises” — of smoke and the COVID-19 pandemic.

Seattle and King County announced a smoke shelter for 80 people was opening in SoDo Friday, at 1045 6th Ave S.

Complicating this shelter are worries over the spread of coronavirus. Smoke can also make people more susceptible to respiratory infections.

“Sort of like campfire smoke to me,” Wiley said. “I’m not going to do any heavy running today.”

They also note that very common cloth and surgical masks which are effective in slowing the spread of COVID-19 are not effective against smoke.

Seattle Parks and Recreation has also closed all parks, boat ramps, beaches and playfields through Sunday because of the smoke danger. Restrooms will remain open in these areas.

RELATED: Seattle closing all parks, beaches through the weekend due to poor air quality

Amy Snover, director of the Climate Impacts Group at the University of Washington, stopped at Gas Works Park Friday to take a picture of the smoke. She said it’s important to keep in mind what causes these massive fires, and the accompanying pollution.

Over at Alki Beach, Olivia Johnson took a few pictures of the blood-red setting sun, dimmed by the thick smoke.

“I feel like I’m in an apocalypse,” she said, with a laugh.

And she found herself thinking about the root cause as well.

“This is a climate crisis,” she said. “Not chance, not coincidence. It’s a thing that is building. And in a way, I’m glad to see the catastrophe it’s causing. Hopefully it will have some impact.”

But will it be a wake-up call?

“I hope people are woken up," Snover said. "And I really wish this isn’t what it would take for that – but we can’t wait any longer.”