Biologists are trying to prove fish inside Cooke Aquaculture's Rich Passage net pens are infected with a highly contagious and debilitating virus. 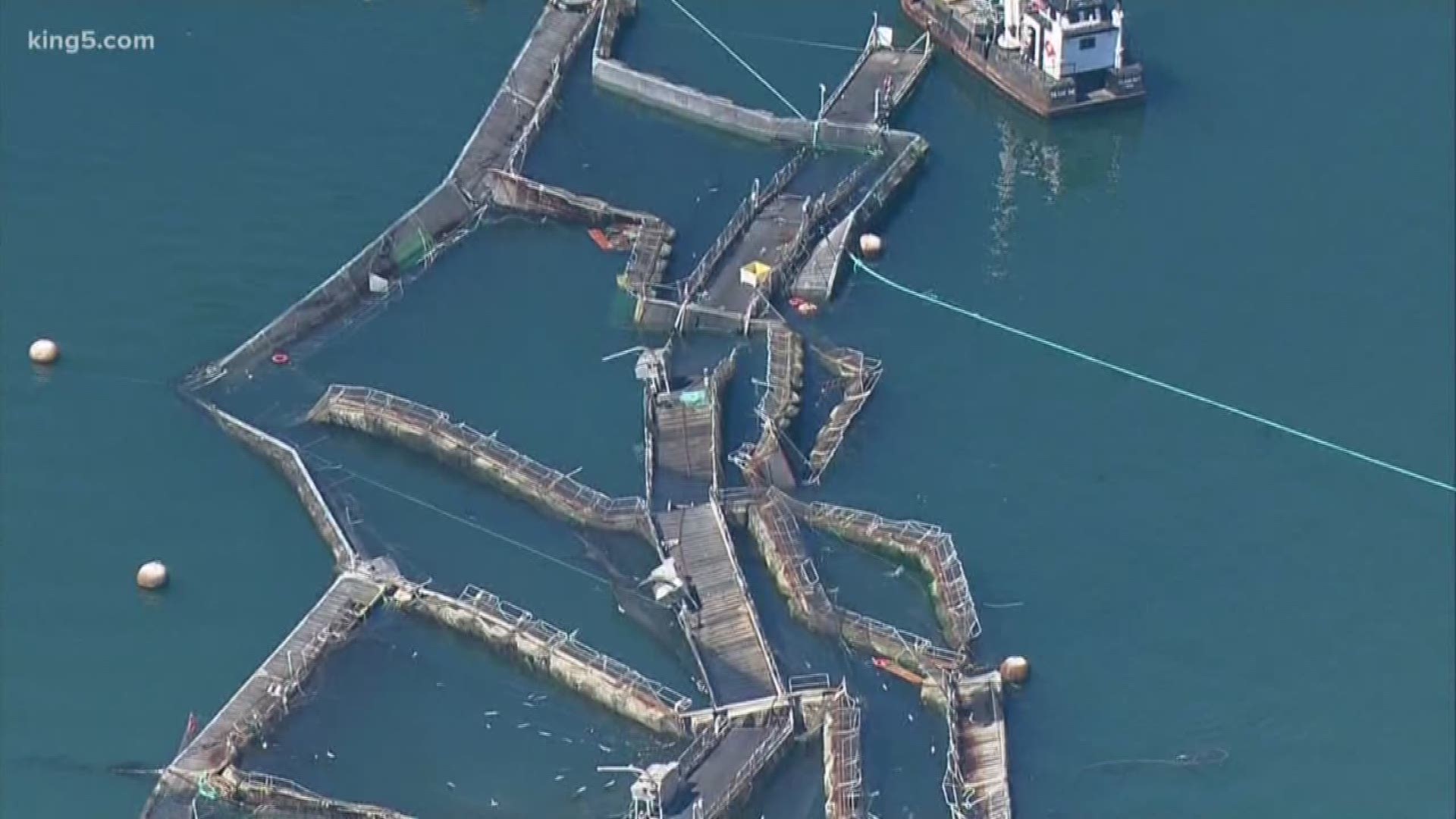 Alex Morton sits perched on the bow of the dinghy as it putters along, eyes combing the water for the little organic chunks she’s after. A stone’s throw away, Atlantic salmon bob and leap inside Cooke Aquaculture’s floating net pens in Rich Passage.

She telescopes out a metal pole with a home aquarium net lashed to its end and begins dipping it in the water, scooping up white, fatty tissue that dots the waters outside the pens.

“This is what we’re looking for, these little, tiny pieces,” she says.

“This farm, it’s everywhere. There, there, there.”

"Sometimes we have to hunt for hours. I don’t know what’s going on inside the farms, but they’re losing a lot of pieces of their fish."

The pieces, believed to be chunks of the Atlantic salmon, go into small vials headed to a lab for testing. Morton, an independent biologist, is in Rich Passage looking for samples with environmental groups Sea Shepherd and the Wild Fish Conservancy. They suspect that the test results will show what previous testing by the conservancy has found in fish recovered after Cooke's net pen facility at Cypress Island collapsed last summer: piscine orthoreovirus (PRV).

That virus, they say, is highly contagious and debilitating and has the ability to infect and harm native wild fish, like Chinook salmon.

“When you realize that many of these pens that we have in Washington are right along our juvenile out-migration pathways, we can’t afford to have any more harm done to our native stocks, especially Chinook,” said Kurt Beardslee, who runs the Wild Fish Conservancy.

PRV can cause HSMI (heart and skeletal muscle inflammation disease), a lethal salmonid disease, and even in the absence of HSMI, PRV can cause debilitating or lethal impacts in wild salmon, the conservancy says.

The state’s Department of Fish and Wildlife, one of the regulatory agencies that oversees Cooke's operations in state waters, and the Wild Fish Conservancy have clashed on this topic previously. PRV is present in both captive Atlantic salmon and free-swimming native Pacific salmon, Fish and Wildlife argued earlier this year in response to claims about PRV made by the conservancy. PRV occurs naturally and was first confirmed in the Salish Sea in fish samples taken in 1987, the agency said.

“In most cases, fish with PRV are healthy and show no signs of disease,” wrote Ken Warheit, fish health and genetic specialist for Fish and Wildlife, in February. “The syndrome HSMI has been associated with PRV in Atlantic salmon aquaculture only. HSMI affects only a small subset of captive Atlantic salmon with PRV and in most cases HSMI is not fatal.”

In May, Fish and Wildlife denied a permit for the company to transfer 800,000 Atlantic salmon from its hatchery near Rochester to its empty net pens across Rich Passage from the pens Morton was testing, saying that the fish had tested positive for a form of PRV.

Late last month, Fish and Wildlife announced that it had authorized Cooke to transfer a different batch of 800,000 juvenile Atlantic salmon to its two remaining net pen facilities in Puget Sound: half to its Hope Island facility in Skagit Bay, the other half to pens in Rich Passage. Fish and Wildlife said that the fish had been tested and that they met the state’s health requirements, including testing negative for all forms of PRV.

The company has maintained previously that its operations "do no damage to wild salmon" and that Atlantic salmon farming "does not suppress or otherwise undermine the region’s important wild fishery."

Joel Richardson, a spokesman for Cooke, wrote to the Kitsap Sun in an email: “Given that WDFW has certified that our hatchery fish are disease free, we will be transporting the juvenile Atlantic salmon to our approved farm sites in the future,” but didn’t respond to other questions about PRV and the company’s operations in Rich Passage.

The collapse of Cooke’s facility at Cypress Island last August drew heavy criticism to Cooke’s fish farming facilities in state waters, and earlier this year, lawmakers moved to enact legislation that would phase them out.

Cooke, the only tenant that leases those facilities in the state, will be forced to shut down its two remaining operations when their leases expire in 2022. The state previously canceled leases at the company’s Port Angeles and Cypress Island sites.

Morton, the biologist, hails from British Columbia, where the fish farming industry is much larger. She hopes to see the industry move to use land-based operations and that Washington's move to outlaw net pens in its waters will inspire her home province to do the same.