Though the invasive hornet was caught alive in Whatcom County, glue became stuck on its wing and it was unable to fly back to its colony. 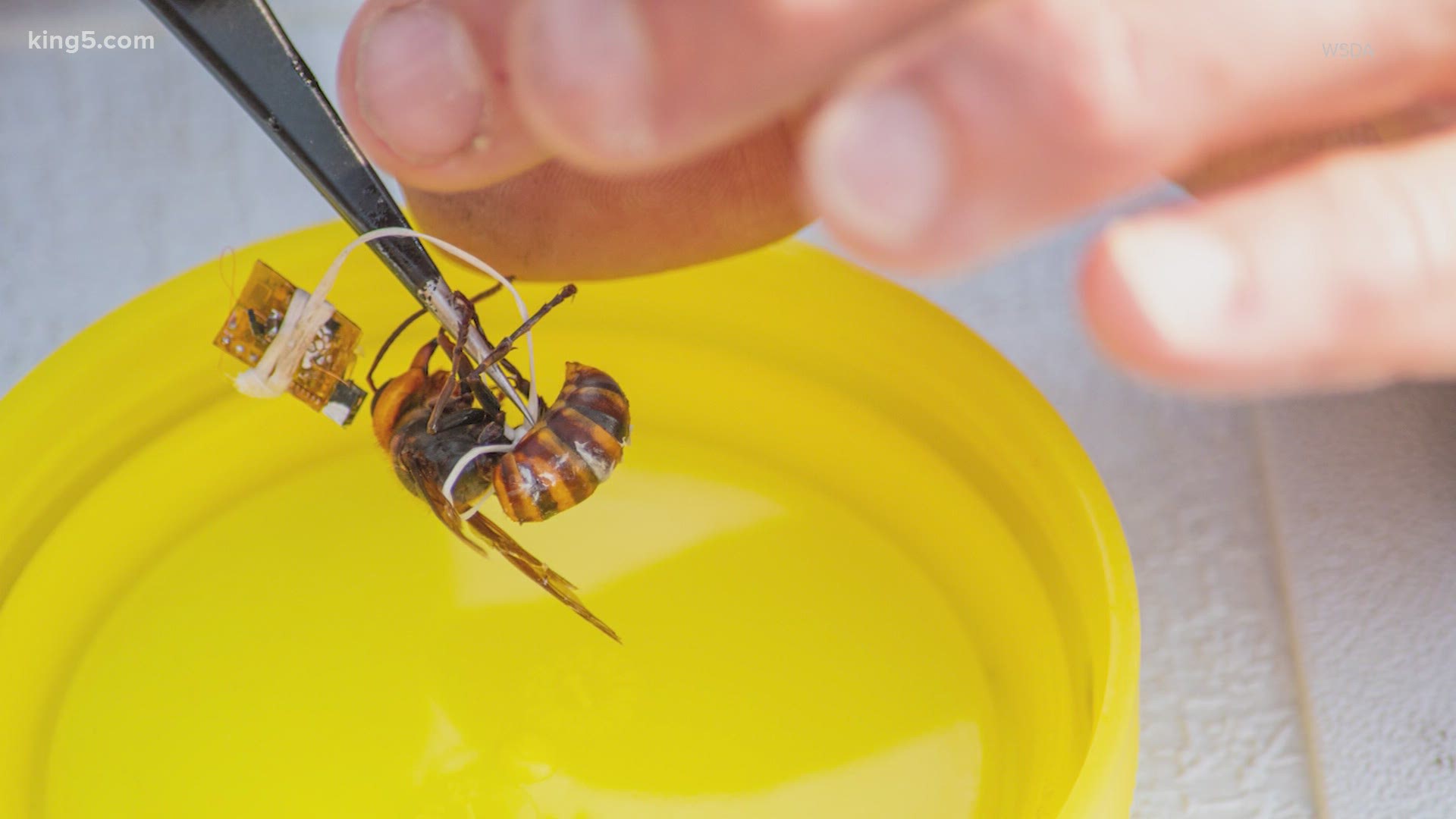 WHATCOM COUNTY, Wash. — Officials with the Washington State Department of Agriculture caught their first live Asian giant hornet this week - a goal the state has discussed for months now in the race to eradicate the invasive pest.

The hornet was netted while buzzing around Philip Bovenkamp's home East of Blaine in Whatcom County. He had noticed several of the hornets visiting a paper wasp nest over the past few weeks, and alerted Agriculture. Then while a WSDA staffer was there, a hornet buzzed up, and was netted.

"It all happened so fast," said Bovenkamp. "I wish I would have had the wherewithal to pull my cellphone out and videotape it."

WSDA returned the next day to try and glue on a radio tracker, and release the hornet near his home. The goal being to follow the hornet back to its nest, so officials can wipe it out.

However, while trying to glue on the tracker, the tag slipped off, and the hornet's wings dipped into the glue on its back, which left it unable to fly.

"We have actually tested this out on bald-faced hornets before and experienced similar trouble," said WSDA entomologist Sven Spichiger. "Gluing tracking tags is usually done on honeybees, bumble bees, things like that and some other insects. One of the neat things about hornets is they’re not quite as hairy as those, so there’s not much for the glue to grab onto. So you do have to be very patient and wait till it dries, but when you’re handling an Asian giant hornet, obviously it doesn’t want you handling it, so you have to keep it chilled down."

He said the combination of drying time, cold from an ice-filled cooler, and the hornet's movement led to the slippage, and the failure. When the team tried the fallback plan of tying the tracker to the hornet, it was still unable to fly.

"It was really interesting," said Bovenkamp. "I kept my daughter home from school to watch it. It's disappointing, but it's likely we're going to find another."

This comes after an active week for the hornets in the area - six specimens or sightings in the Blaine area alone, leading officials to believe a nest is active nearby. They are focused there, and in the Birch Bay area of Whatcom County.

With these new sightings and captures, 15 hornets have been reported in Whatcom County over the past few months. The total represents the first sightings of the hornets in Washington state and the U.S. since they were first spotted at the end of 2019.

Experts say this is their active season, where the hornets go searching for food. They mark bee hives, and return to destroy them, entering what's known as a 'slaughter phase.' In this phase, just a few Asian giant hornets can decimate thousands of bees, decapitating them.

The Asian giant hornets are invasive to the Pacific Northwest. It's not clear how they were introduced. British Columbia is facing a similar problem, and trying to eliminate the hornets.

Using data from a similar species, Washington State University scientists predicted that without containment, Asian giant hornets could spread into southern Washington and Oregon, and north through British Columbia.

People who believe they have seen the hornets are asked to contact WSDA. They ask you to exercise extreme caution if you see one — their stingers are longer than native bees and hornets, they can sting repeatedly and their venom is more toxic.

Still - officials say they do not pose a significant threat to humans and pets.

The Dept. of Agriculture has also set up a hotline as the hornets enter the fall active phase - calling it a '911 for beekeepers.' They say if you see hives under an active hornet attack, do not try to defend the colony, and please call 360-902-1880 so WSDA can respond. For the general public, they ask you report sightings here.

The department is also testing other preventative methods in Whatcom County - including mesh on hives that allows bees to pass, but not hornets, and "sentinel hives" they hope might draw the hornets in for trapping.