Less logging means less funding for K-12 education in Washington, and that's complicating a debate over the fate of a tract of forest outside Gold Bar. 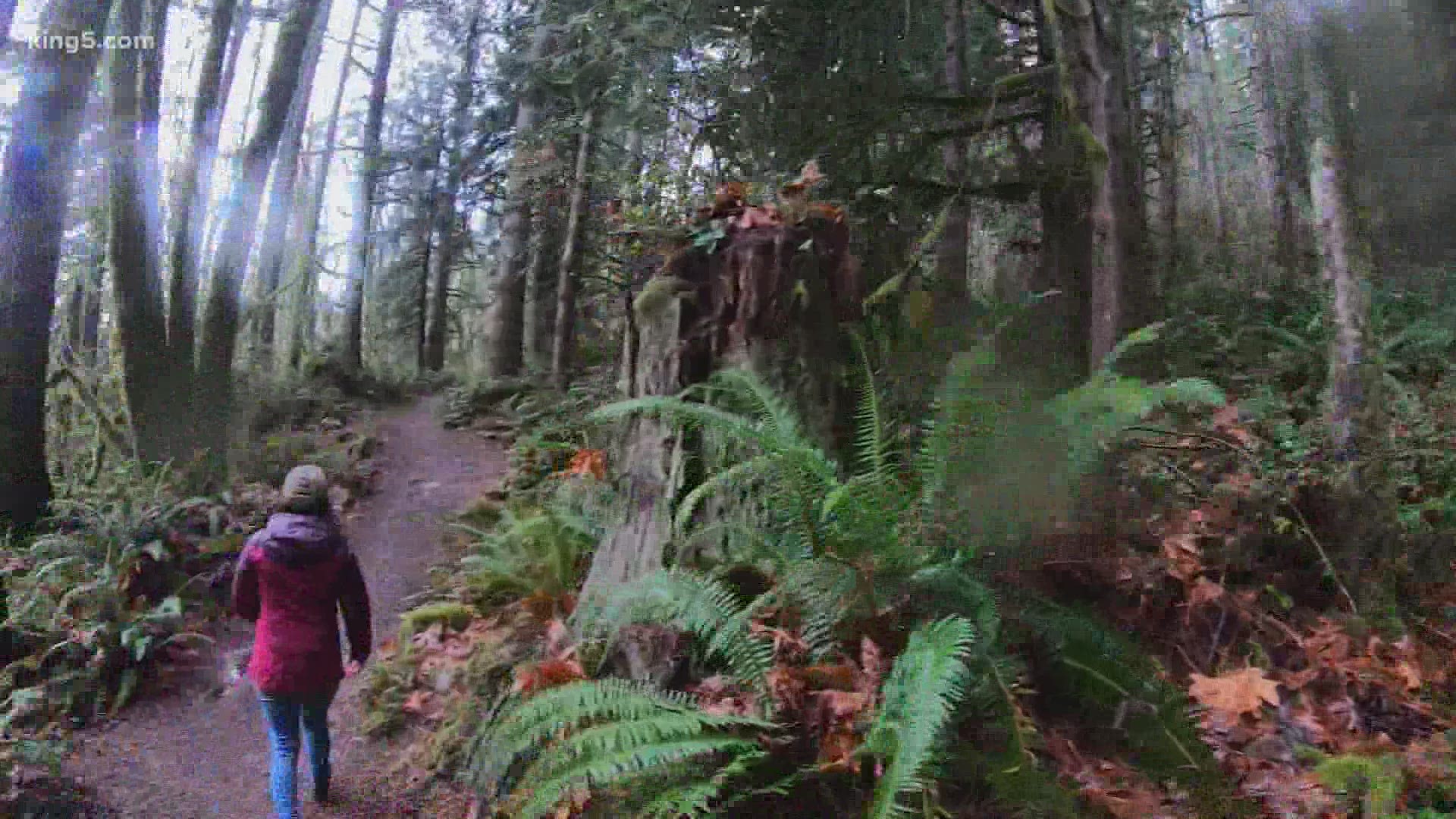 GOLD BAR, Wash. — Some in Snohomish County are fighting to stop a proposed logging project near the popular Wallace Falls State Park.

The state Board of Natural Resources approved the Middle May timber sale in September after years of discussion. But Irene Nash, of Sky Valley Future, hoped to prevent the sale and have the land turned into a preserve.

DNR said Monday that the sale proceeded as planned, and is expected to be finalized this week.

“It’s a beautiful area that’s basically remained untouched for a lot longer than other forests around here,” she said on a recent hike to the area from the Reiter Foothills trailhead.

The group outlines the plan on its website and has been lobbying various public entities for support. It would only take a three of five majority vote on the Snohomish County Council to have the state Department of Natural Resources (DNR) convey the land to the county for a limited cost.

“What we’re proposing with the proposed park reconveyance, is to take 5,000 acres and simply preserve it instead of turning it into a massive area of more clear cut,” Nash said.

The Tulalip Tribe, with deep historical roots in the area, supports the sale, according to a Department of Natural Resources release:

“The Middle May timber sale is an example of DNR working closely with Tulalip and other Treaty Tribes, ensuring that the Reiter Foothills’ lands are managed so as to protect important species and landscapes,” said tribe Board Chairwoman Teri Gobin. “The Middle May timber sale will allow for vital stream restoration efforts to be implemented. As co-managers, we can testify it will improve habitat while maintaining working forests. Tulalip strongly believes in DNR's management of these lands for the greater good of this and future generations.”

However, the Sauk-Suiattle Tribe has expressed concerns. In a pair of letters to the DNR, the tribe first said it had "conditional support for the proposed reconveyance" if it’s done in a way to protect wildlife, cultural features like modified trees and waterfalls, and preserve tribal access.

On Nov. 20, the tribe asked DNR to delay the sale, currently on the books for Nov. 30, for another three months to study several factors.

But the issue is even more complicated. The DNR said the sale will generate $1.9 million for Snohomish County, state schools, county roads, and taxing districts like Sultan, where the middle school needs roof repairs, among other district projects.

The Sultan School District relies on funding from sales like this, Superintendent Dan Chaplik told KING 5. He said stopping the Middle May sale would be a “significant financial challenge” for the district.

It’s part of longstanding system in Washington, where state trust lands like the Middle May tract are managed by the DNR to help fund various beneficiaries like the University of Washington, Capitol buildings, and K-12 education. It’s common in Western states and described by The Pew Trusts as “a bank accounting collecting interest” until trees are ready to harvest.

The DNR manages about 3 million acres of state trust land, most of it in the western part of the state.

But the system comes with its own issues: timber is valuable, and historically an important industry to Washington. But some tracts of land can get tied up in Endangered Species Act claims, or issues like this, where groups hope to protect sections for various reasons.

He also notes it has dropped over the years. Now, 5.6% of the total capital budget comes from trust lands, which is about $196 per two years.

“There might be a better, longer-term use for some of this property,” Reykdal said.

He did vote for the current DNR plan while on the Board of Natural Resources, but down the road, he would like to see the state step in and foot the bill, instead of relying on variable funds from timber harvests. Opponents like Nash call the system outdated, and Reykdal felt that term was fair.

“I think it’s the right word,” he said. “Again, it’s not because we shouldn’t harvest when it’s well balanced and appropriate, and it isn’t that we shouldn’t help schools. But should those two things be connected? And that’s why I’m trying to strike this line to say, 'Legislature, you should pick up the cost of school construction and not make it a function of this, if there’s higher better use for timber.'”

That worries Chaplik. He said he’s not opposed to a reworked funding structure, but Sultan is one of the districts that most benefits from state trust land funding because of the timber in the area, and he said while it’s not perfect, “working forests are working for Sultan best as it can.”

He also worried about a change coming without a replacement funding strategy.

As for Nash and Sky Valley Future, time is running out. With the sale set to begin on the 30th, she’s hoping for any last minute delays. Namely – if the Sauk-Suiattle and Tulalip can agree on if or how they’d like to see the land preserved, and communicate that to the DNR or Snohomish County council.

“I do think there’s hope,” she said. “There’s a really short timeline. We’re really appreciative that the Sauk-Suiattle Tribe has played a leadership role in trying to preserve this area. It won’t be easy, but there is a chance.”