A wheat revolution is growing in western Washington

Almost all of Washington's wheat farms are on the eastern side of the Cascade range, but that's starting to change. A new group is helping farmers in western Washington start a wheat revolution. 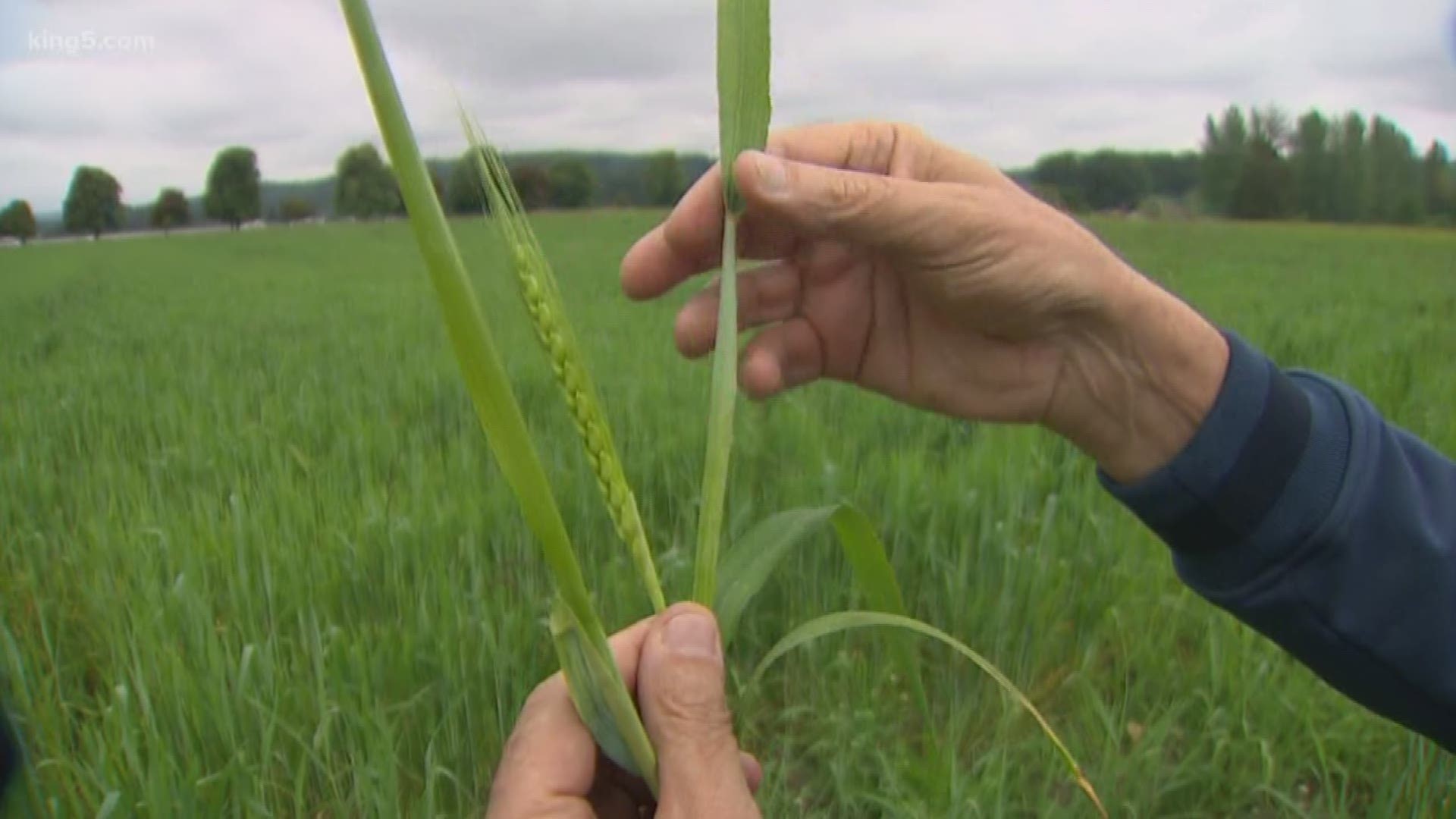 CARNATION, Wash. — Eastern Washington is known as the state's grain growing region, but a small group of farmers along with a couple of commodity wheat defectors are now growing a wheat revolution on the west side of the Cascades.

There are about 50 million acres of commodity wheat grown in the U.S. and roughly 2.2 million of those acres are in eastern Washington.

"Here in western Washington, we're outside the commodity system so we can define what that wheat would be like, what it tastes like, what it looks like, what the nutritional value and functionality is," The Bread Lab Director Stephen Jones explained. "We can develop wheat that tastes good but is also highly nutritious. So that's different than what a commodity wheat is designed for."

Commodity wheat in eastern Washington is grown for white flour that is mostly shipped overseas. The total wheat production in 2018 was 153.2 million bushels.

Washington is the fourth wheat producing state in the nation. Wheat ranks third in Washington commodities based on production value, representing nearly $691 million.

Jones and his colleague Senior Scientific Assistant Steve Lyon left the commodity market in eastern Washington a decade ago to bring a different kind of wheat to the west side of the state.

"When we got here 10 years ago, we were told you can't grow bread wheat here," Jones said.

The Washington State University Bread Lab Plant Breeding Program conducts research on thousands of types of wheat, barley, buckwheat, and other small grains. They look for grains that grow well for farmers and are well suited for craft baking, cooking, malting, brewing, and distilling.

"Selecting for flavor, nutrition, and distinctive characteristics, samples of the most promising varieties are brought into the Bread Lab for analysis to determine the product that best utilizes and manifests their unique characteristics," The Bread Lab’s website reads.

The varieties The Bread Lab is developing on their Skagit Valley farm are meant for whole wheat use, not like the white flour of the commodity market.

"It sounds so dumb, but we never tasted the bread we made because it just got co-mingled in a big elevator. It was never identity preserved and it was shipped overseas," Lyon said. "We got here and found out they were growing the wrong grains. They were losing up to $700 an acre just by not growing the right varieties that were available. The farmers didn't know it. It wasn't their fault. This whole area had been ignored."

Carnation Farms is one of three in the Snoqualmie Valley now partnering to grow grains for consumption. The crop was mainly grown to help soil health but never to sell as food.

"It's been said that grain can't be grown west of the Cascades and it's really exciting to be part of proving that wrong," said Carnation Farms Executive Director Hannah Cavendish-Palmer. "We are within 30 miles of the city of Seattle where there are tons of eaters who don't even know that local grain is a thing."

Along with two other farms in the valley, Carnation Farms has purchased a combine to harvest the wheat and will share the costs of milling.

"This is not crazy. It's not crazy to grow grain west of the Cascades," said Cavendish-Palmer.

As gluten allergies grow and diet fads point consumers away from bread and grains, The Bread Lab is trying to win back the ancient food's reputation. They cite the iron, zinc, and fiber in 100% whole wheat that is processed and fermented to preserve nutrition.

The Bread Lab's goal is to keep farmers in business by growing a crop that's good for the soil and stays within the local community.

"How do we keep the farms viable? We make wheat profitable for farmers where before it wasn't," Jones said. "Bread is who we are, who we were, and who we should be."