Suppliers pressure Boeing to keep next plane in Washington

The pressure is on for Boeing to build it's next new jet in the Puget Sound area. 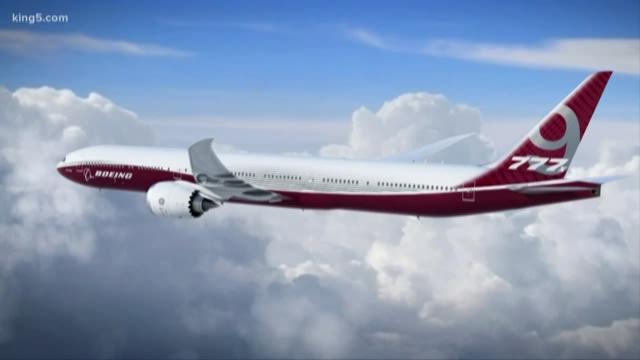 We think of Boeing’s newest airplane as the Everett built large composite wing 777X. But even before the first jet rolls even out of the factory later in 2018, the effort to win the next jet for Washington is on. That jet doesn’t even have a real name, and Boeing hasn’t yet committed to build it, known for now as the NMA, for New Mid-sized Airplane. Some call it the New Middle-market Airplane.

Washington Governor Jay Inslee last week formed an advisory council including the Aerospace Futures Alliance, representing may of the companies that supply parts and services to Boeing, under the name “Choose Washington NMA Council.”

“Common sense says we need to work as hard as we can to make sure it happens,” says the AFA’s Kelly Maloney. “But. we're in a good position.” And it’s a broad based effort says Maloney. “County executives, the Governor's office, AFA, which represents industry, economic development groups and labor, working together to make sure we have a proposal that's going to win this airplane.”

PNAA, the Pacific Northwest Aerospace Alliance, a regional organization including Canada has also expressed interest in supporting the efforts to build the NMA here. It’s annual conference is wrapping up in Lynnwood.

If you have the feeling you’ve seen this movie before, you have. Location of final assembly factories for both the Boeing 787, and the 777X involved competitive bidding from other states. Here in Boeing’s traditional home in Washington, coalitions working with two governors along with legislators kept Boeing from moving programs elsewhere. However in 2009 Boeing established a second 787 assembly line in North Charleston, South Carolina.

Other states in the hunt for those jets included both North Carolina, Missouri, Alabama, Texas, California, Utah and others.

Washington kept winning in part, by offering billions in tax breaks for all commercial airplane activity in Washington to win the 787, extended for another 20 years to win the 777X. Boeing says it has invested well over a billion dollars in a new composite wing factory and fuselage automation in Everett, as more suppliers providing robots and other tools and supplies have come to set up shop to support the jet. A controversial aspect of the tax breaks surrounded efforts to tie the breaks to jobs, which didn’t survive negotiations for the 777X.

Where do things stand. On February 7th, the NMA Exeutive Council announced it has hired well known industry consultant and analyst Richard Aboulafia of the Teal Group to do a deep dive study of the state’s competitive position. Aboulafia tells KING 5 News that report is due out in late April.

Washington and the Pacific Northwest faces a tougher landscape than on the 777X says Michel Merluzeau, of Air Insight Research, a company which studies the commercial aircraft market. “I think this is going to be a much tougher competition. Especially, since my analysis is that Boeing is going to have very aggressive cost targets for this airplane.”

The Pacific Northwest is considered an aerospace cluster, a decades old growing concentration of companies, many of which have supported Boeing from even before the dawn of the jet age in the 1950s. But other clusters are growing around the country, in Alabama, where Airbus established a factory to build A-320s, and around Boeing’s factories in South Carolina.