Boeing said it expects to cut its workforce to about 130,000 employees by the end of next year, down 30,000 from the start of this year. 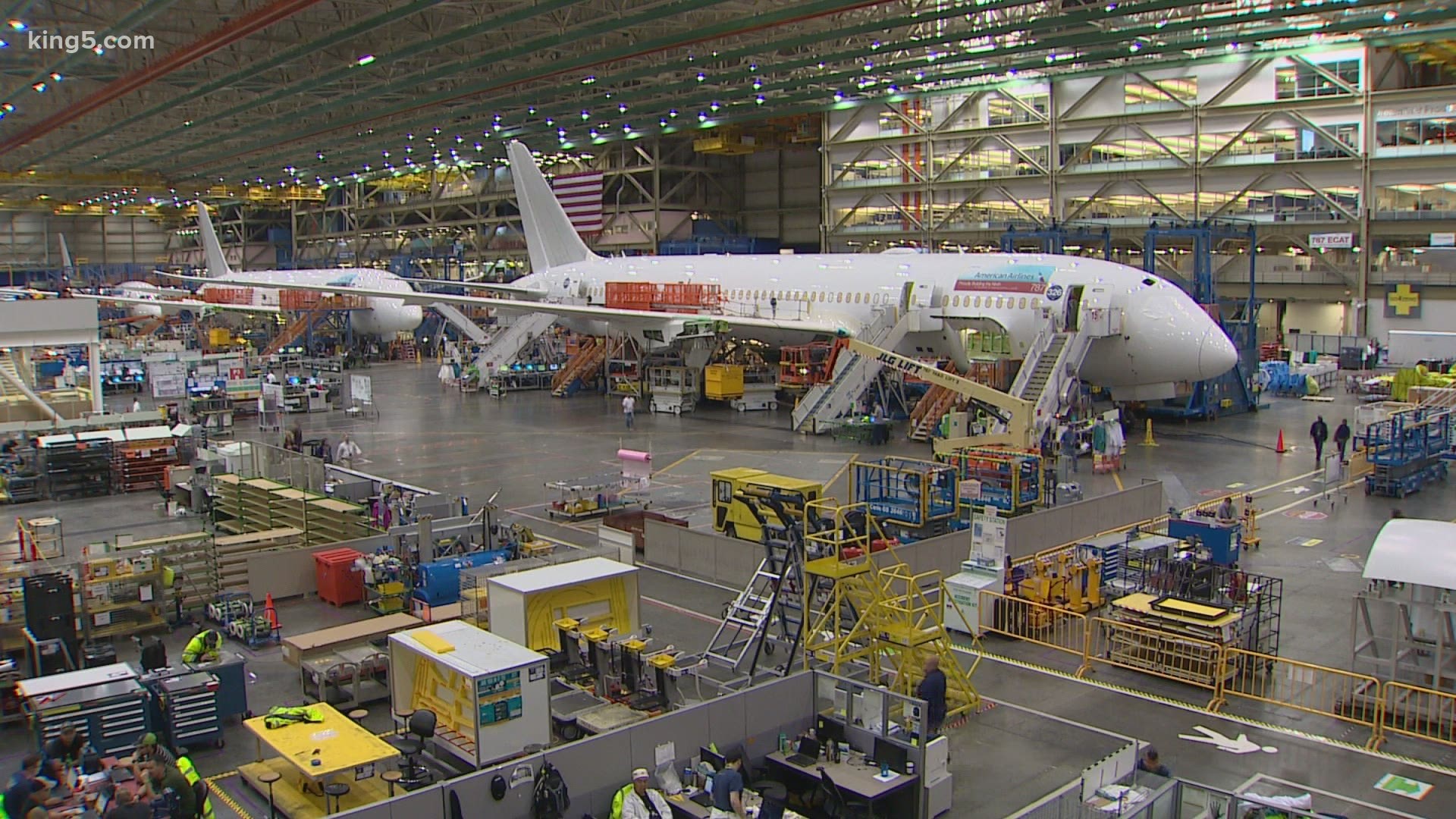 Boeing will cut more jobs as it continues to bleed money and its revenue fades during a pandemic that has smothered demand for new airline planes.

While it is unclear from where all those job will be cut, Snohomish County Executive Dave Somers said it's bound to have an impact in Washington state.

"They're the biggest employer in Snohomish County," Somers said. "It's kind of like they're a member of the family that's hurting. They're our family members and friends. We hurt right along with them."

Earlier this month Boeing decided to halt production of the 787 Dreamliner in Everett and move it to a nonunion workforce in South Carolina.

"The layoffs are tough on our community, tough on our members," says Machinists Union President Jon Holden. "We have to weather some tough times, here. We've done it in the past. As long as we can get through it well be well poised to meet the needs of the airline industry going forward."

The company also announced changes to its employee retirement plans that would save the company $1 billion.

RELATED: Boeing to save $1 billion with retirement contribution switch from cash to company stock

Boeing Co. talked about the more severe job cuts on the same day it reported a $449 million loss for the third quarter, a swing from the $1.17 billion it earned in the same period last year. The loss was still not as bad as feared.

Boeing has been whipsawed by a drop in revenue after its 737 MAX was grounded in March 2019 following two deadly crashes, and then a pandemic that has caused air travel to plunge and left airlines with more planes than they need.

It has been a bruising stretch for one of America’s preeminent manufacturers. Thursday marks the second anniversary of the first MAX crash, Lion Air flight 610, which plunged into the Java Sea just off the coast of Indonesia killing all 189 aboard.

The pandemic has intensified the pain.

The company recently lowered its forecast of demand for new planes over the next decade by 11% because of the coronavirus pandemic. Some analysts think even that scaled-back forecast was too rosy.

Boeing, which along with Europe’s Airbus dominates the aircraft-building industry, has seen orders and deliveries of new planes shrivel this year in the face of the pandemic and the grounding of the MAX, its marquee aircraft.

Boeing has cut production as deliveries slow and cancellations snowball, leaving it with too many workers.

The MAX was Boeing’s best-selling plane, but now the company has several hundred in storage that it is unable to deliver.

Boeing has spent about two years overhauling flight-control software and computers on the plane after an automated anti-stall system pushed the noses down before crashes in Indonesia and Ethiopia that killed a combined 346 people.

The company expects regulators will allow the resumption of deliveries before the end of the year when it will again ramp up production. Cowen analyst Cai von Rumohr said that suggests Boeing believes that airlines will still take the plane, or that it is willing to whittle down its inventory more slowly.

Snohomish County's Somers is confident the area will recover as the aerospace industry returns.

"We know at the end of the day we'll get the virus under control somehow. We will come back and there will be demand for passenger airplanes again," Somers said.

Once Boeing gets to that goal of just 130,000 workers worldwide it will be about 40% less than when it merged with McDonnell Douglas back in 1997.

Last week Boeing’s biggest customer, Southwest Airlines, said that it is looking at Europe's Airbus A220. Southwest’s fleet consists entirely of Boeing 737s, and the airline was forced to cancel thousands of flights last year because of the MAX grounding.

Boeing CEO David Calhoun said Wednesday that Southwest's fleet will be mostly Boeing “for a long time coming ... we hope it stays all Boeing.”

“The MAX has cost us a lot of money” and has forced Boeing to borrow “to make up for the fact that we couldn’t ship the world’s most popular airplane,” Calhoun said on CNBC. “We are getting very close I believe to the finish line with respect to certifying the MAX and to begin deliveries.”

Boeing has other challenges. Because of the MAX crisis, it delayed a decision about designing a slightly larger plane than the MAX — hesitation that could result in ceding part of the airplane market to Airbus and its A321XLR.

The company failed to record a single order for a new jetliner in September. In the first nine months of the year, Boeing has delivered only 98 airline planes, compared with 301 during the same stretch of 2019. That drop is crucial because aircraft makers get most of their cash from sales when planes are delivered.

The Chicago company, which has airplane assembly plants near Seattle and in South Carolina, plans to cut its labor force by not replacing people who retire and cutting 7,000 with buyouts and layoffs through next year.

The company has borrowed billions of dollars in private credit to get through the downturn, although it bypassed federal pandemic-relief funds.

Boeing said that excluding non-repeating gains, it lost $1.39 per share. Wall Street expected a loss of $2.35 per share, according to a FactSet survey. Revenue was lower than expected, however, with the FactSet survey pointing to sales of $14.20 billion.

Shares of Boeing fell nearly 3% Wednesday. They have dropped 52% since the start of the year, compared with an increase of nearly 5% in the Standard & Poor’s 500 index.