Three 737 MAX orders were canceled in September. Another 48 were dropped over concerns that customers will be unable to go through with the orders. 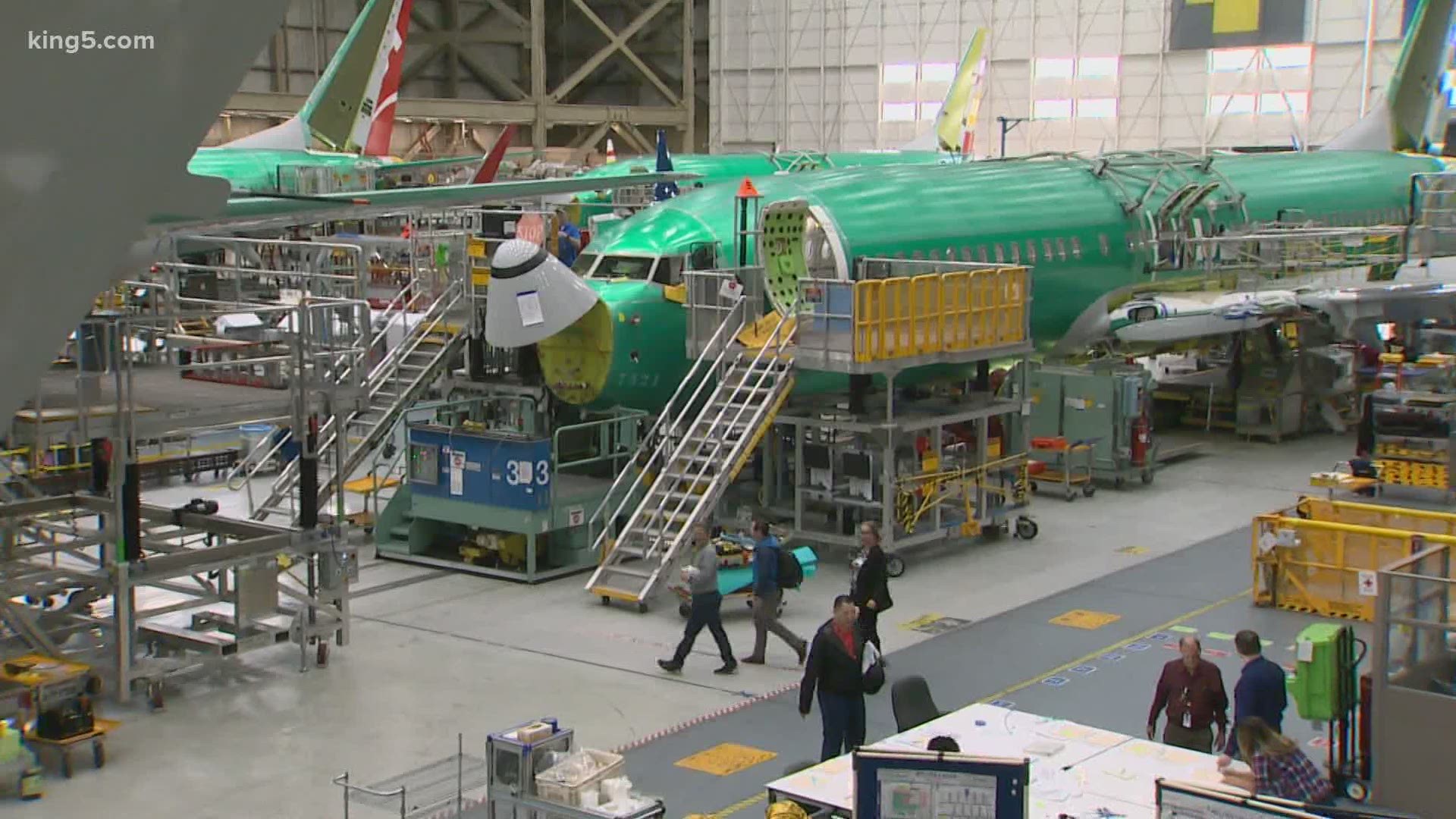 EVERETT, Wash. — Boeing failed to sell any airline planes last month and suffered more cancellations of a grounded jetliner, further evidence of the company's battle to overcome a drop in air travel during the pandemic and crashes involving the 737 MAX.

The company announced three additional cancellations and 48 planes moved out of the backlog during the month of September because of concerns that the companies that ordered the planes won't be in a financial state to buy them.

While the orders still stand, taking the planes out of the backlog is due to an accounting rule known as ASC 606.

“Essentially, ASC606 is an accounting requirement that says you have an order for a customer in your backlog, but that customer is having acute financial trouble,” said Jon Ostrower, publisher of the aviation website The Air Current.

“So while contractually that order exists, it hasn’t been canceled, but realistically, that’s not going to materialize.”

Does that accounting rule effectively double the number of cancellations?

For the MAX, the number of outright cancellations as of the end of September stands at 436. The number of orders removed from the 737 MAX backlog under ASC 606 stands at 570.

That means the total number of MAX  orders that may never turn into delivered airplanes stands at 1,006 jets.

Call it what you will, but theoretically, at least, those numbers held in that sort of Twilight Zone of ASC 606 could come back up and turn into real airplanes. But Ostrower, who also reported for the Wall Street Journal isn’t optimistic.

“That 'meltaway' is going to determine a huge amount about what happens around production rates, around employment,” he said.

In other words, accounting terminology that makes most of our eyes glaze over, likely has real consequences. Boeing says it began using ASC 606 in the first quarter of 2018.

That said, Boeing’s backlog for the MAX still stands at 3,403 planes yet to build, orders considered solid enough to have avoided the accounting Twilight Zone.

The MAX has been one of the company's most popular models and the aviation world is still betting that the 19-month-long grounding of the jet will be lifted in November. The jet was grounded after two brand new MAX jets crashed in October of 2018 and again in March of 2019, killing 346 people.

The company says it’s made major changes to the 737 MAX, even beyond modifications and limitations placed on a system called MCAS which is pointed to as the primary cause of the crashes.

The Federal Aviation Administration demanded more changes to the MAX during the grounding that extend beyond MCAS, and included such things as more robust computer systems.

But the problems for the MAX aren’t simply byproducts of the crashes and damage to the MAX and Boeing’s brands. The devastating economic side effects of COVID still keeps 70% of domestic travelers in the U.S. away from airports and airlines, and even higher numbers for international travel.

Yet, with just 67 new airplane orders announced for 2020, and only five of those for the 737 MAX, that battered backlog is considered key to keeping the company’s Renton factory going.

“In the battle between Boeing and Airbus what we’re going to be seeing is who can turn these existing backlogs into actual airplanes that airlines can take delivery of and actually pay for,” Ostrower said.  “This is the measure of success going forward.”

Boeing has booked 67 orders so far this year, but more than 400 orders for the MAX were canceled and another 602 orders from its backlog.

The company booked a MAX order last month from a Polish airline, its first since the grounding 19 months ago.

Boeing said it delivered 11 new commercial planes last month, mostly twin-aisle 787s, compared with 25 last September. The company delivered 98 planes this year, through Sept. 30, compared with 301 in the same period of 2019. The decline in deliveries is crucial because Boeing gets the bulk of cash from sales when jets are delivered.

Chicago-based Boeing Co. has laid off thousands of workers this year. While it chose not to seek government pandemic-relief funds, the company has raised billions in private credit to get through the downturn.