Nine teams competed over the weekend at the University of Washington in a hackathon aiming to make a human connection. 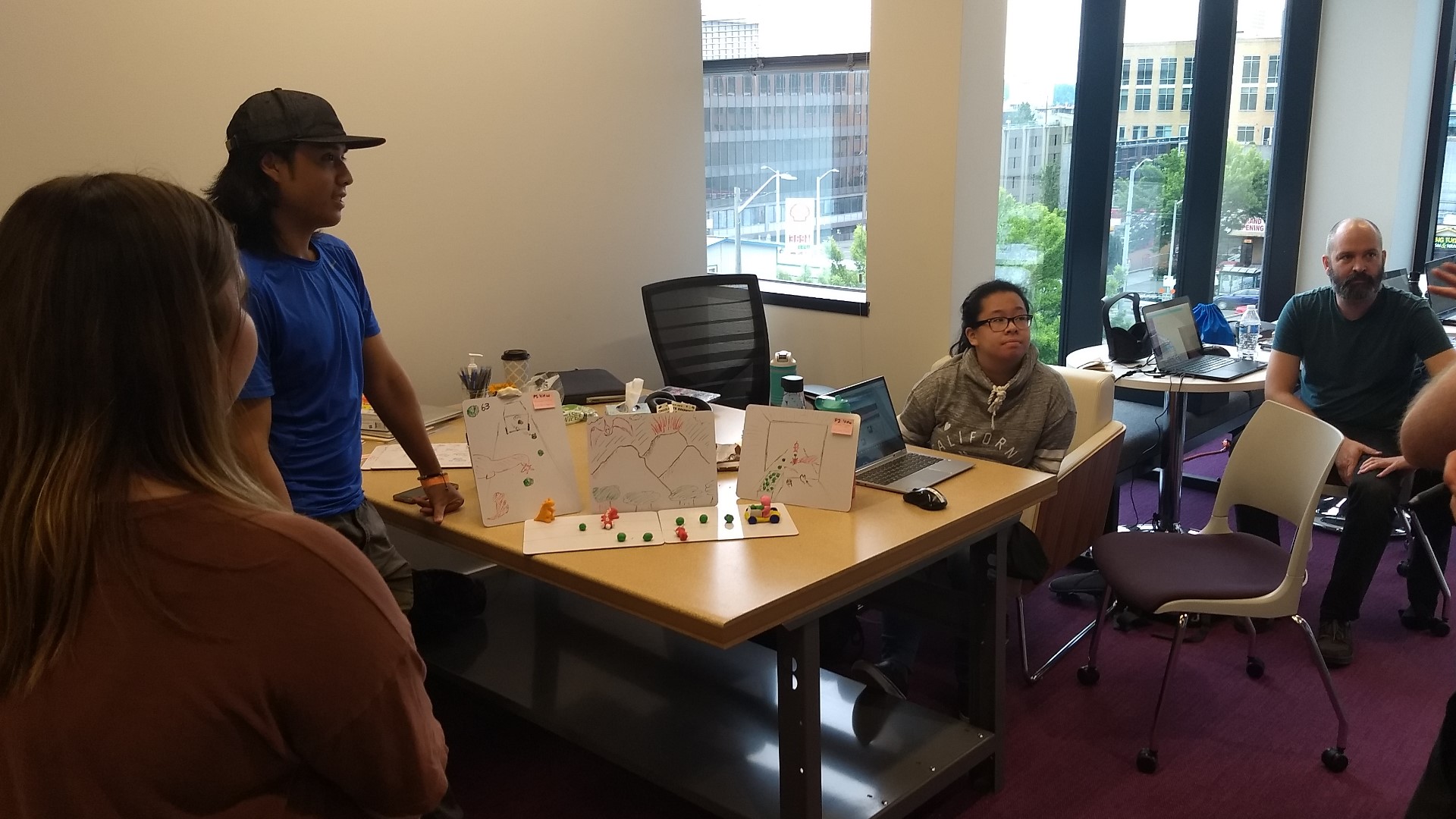 Over the weekend, nine teams made up of friends and strangers gathered to develop projects ranging from a virtual reality dance party to an infographic experience depicting the rise of gun violence in the United States.

Human connection was the theme of a Virtual Reality Hackathon hosted at the University of Washington CoMotion Labs.. Sixty-one participants gathered to share ideas for virtual reality tech that could bring people together. An additional 60 guests popped in throughout the weekend to see what the teams had been up to.

“We’re all looking at our phones all the time, how do we get people to look up and connect?” one of the organizers, Nirav Desai, asked.

The weekend kicked off with a short introduction that included guidelines on expected conduct and how to be considerate of the other hackers. “This is not a dating sim[ulation]” explained one slide. “Hygiene is important! Use deodorant and brush your teeth” instructed another.

Once basic expectations had been set, a lightning round of introductions ensued. Participants got 20 seconds each to introduce themselves, describe their skills, and pitch any ideas they had to the group. Name tags were color-coded with the skills each individual could bring to a team: development, design, production, art, and sound. The event welcomed beginners and veteran virtual reality enthusiasts alike.

“This is my first hackathon,” said freelance animator Dawn Norton. “I’m an introvert, so I’m a little intimidated.”

By the end of the weekend, she had designed a 3D animated dinosaur character to run around a virtual world conceived by Ryan Teel.

“My six-year-old nephew lives in Iowa and I don’t get to see him much, he loves endless runner games, so I wanted to make one that I could play with him,” Teel explained.

The game, named ‘Carter Runs’ after his nephew, featured an animated dinosaur trying to catch a salad truck. Ryan could put on a VR headset and play a character in the salad truck, throwing food to the dinosaur character being played on a regular smartphone by his nephew. The team of seven hackers made a clay mock-up of the game to help envision the world they wanted to create together.

Projects were in various stages of completion on Sunday. With barely 48 hours of work time, the teams did as much as they could to realize their visions. Projects included multi-player games where friends could create music together by making noises that would be remixed as they’re moved around the room by a conductor.

“You’ve played ‘Words with Friends’, this is kind of like ‘Beats with Friends,’” explained team member Megan Frazier.

In one game, you can use a VR headset to pilot an actual toy car and go searching for rubber ducks which you could then fight in the virtual environment. Another game focused on teamwork and required coordination among team members who would control different arms of a single fighting robot. In another project, you are transported to a small Japanese port town where you learn to dance to Soran Bushi, a traditional Japanese Sea Shanty.

At the end of the weekend, four awards were given totaling $1,500. Best in show went to the most serious project undertaken over the weekend: a VR infographic in which the viewer watches as a 3D map of the United States is littered with shell casings representing mass shootings.

The video begins with the infamous 1966 University of Texas shooting. A seminal moment in the history of American gun violence, a heavily armed student occupied the main tower of the Austin campus and shot indiscriminately at students below, resulting in 16 deaths and 31 injuries. It was the deadliest college shooting in United States history until the Virginia Tech shooting in 2007.

As time progresses in the 3D video, the number of gunshots increases and empty shells representing dead and wounded victims pile up in different places on the map. A growing list of shootings accumulates, scrolling up into the sky against a stark white background.

Sean Siem, who conceived the project, expressed his growing frustration with desensitization to gun violence in the United States.

"The frequency of these mass shootings is accelerating, but we don't seem to realize or be reacting to it." Siem said.

The event was organized by members of the Seattle VR community and backed by the Seattle Immersive Technology Association, a nonprofit. This was one of several virtual reality hackathons hosted in Seattle throughout the year, with the largest held annually in September. Anyone looking to get into the world of virtual reality, as a developer or just a visitor, should go to seattle-vr.com where they can see upcoming events and find other resources to connect with the local VR community.