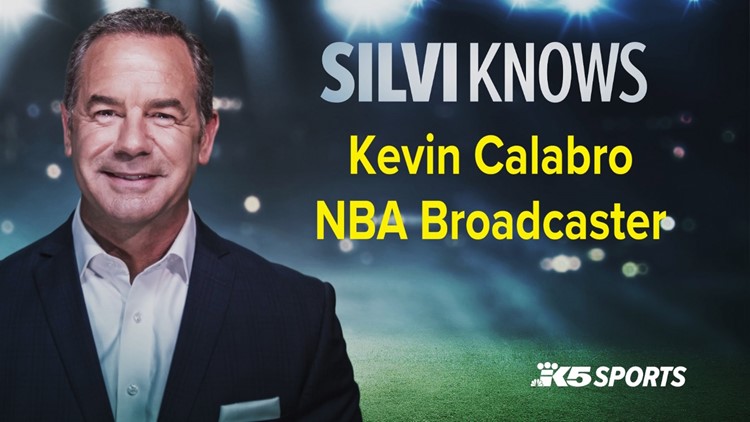 Photo by: KING 5 Sports
Sonics announcing legend Kevin Calabro sits down with Paul Silvi for another edition of "Silvi Knows"

Kevin Calabro is currently in his fourth season broadcasting games for the Trailblazers, but in the Seattle area, he's best known as the longtime voice of the
Author: Paul Silvi
Published: 11:03 PM PST December 20, 2019
Updated: 2:11 PM PST December 22, 2019

Whenever you hear Kevin Calabro's voice on the airwaves, it's easy to conclude he's probably courtside at an NBA game.

He's currently in his fourth season broadcasting games for the Portland Trailblazers, but in the Seattle area, he's best known as the longtime voice of the Sonics.

Calabro joins us on the Silvi Knows podcast to talk a whole lot of NBA, from the current Blazers (16:00), to his days with the Sonics and the always quotable George Karl (30:00).

Calabro often gets credit for giving Sonics great Shawn Kemp his Reign Man nickname, but he sets the record straight (40:00).

It's been a long time since Calabro started his broadcasting career calling minor league hockey games in Indiana (3:00), but it was that Checkers team that gave him his first paid broadcasting job and led him to tell us some humorous stories from back in the day, including a stint as an overnight disc jockey (10:30).

Calabro is one of the best in the business. He is grateful to be working for the Blazers organization and owner Jody Allen and always thankful for the opportunity afforded him by the late Paul Allen (54:30).

Will Calabro ever see a day when an NBA team returns to Seattle (36:45)? That's just one of the many topics we cover on this edition of the Silvi Knows podcast.