UW has kept possession of the Apple Cup for seven seasons in a row. 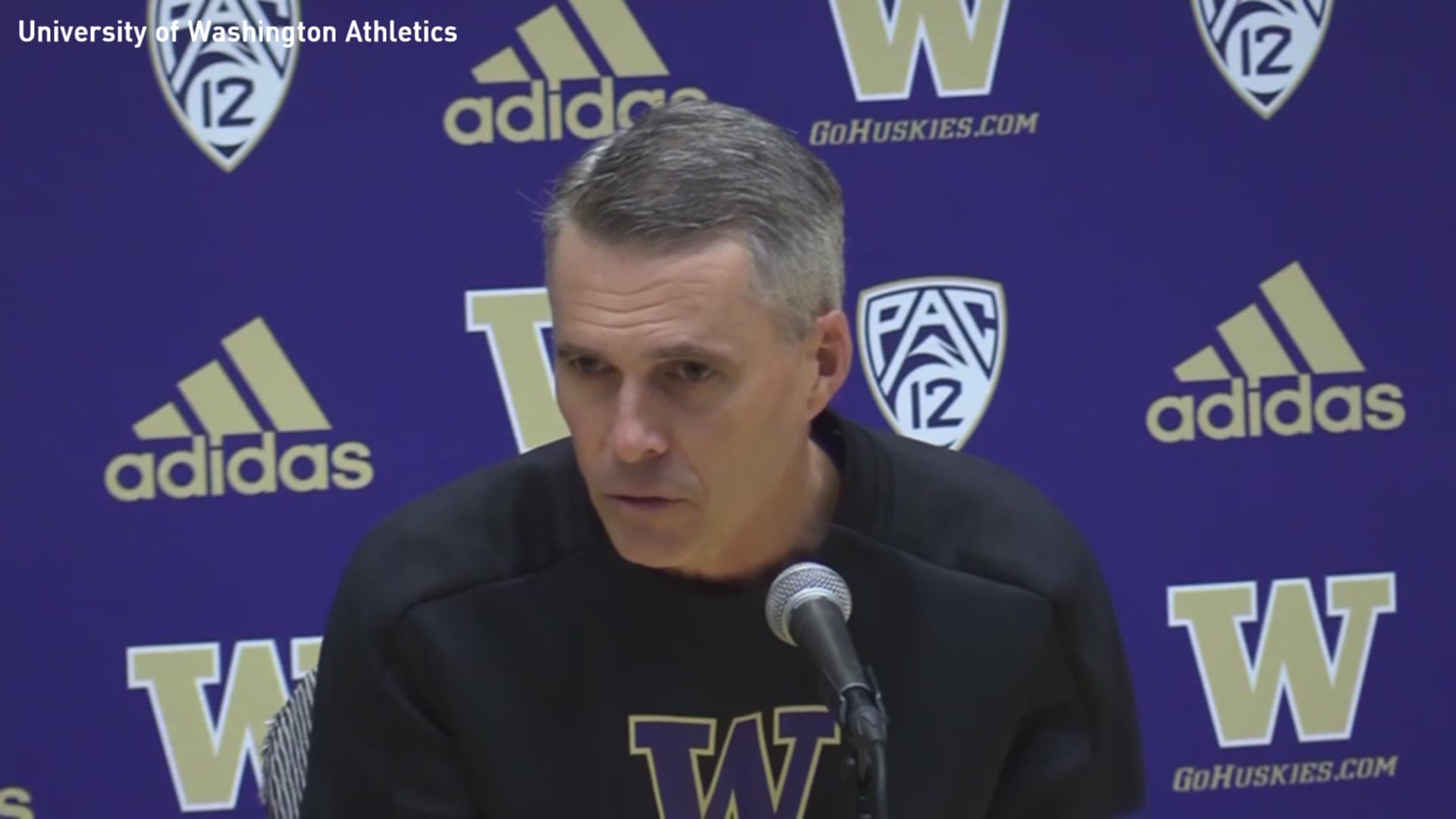 SEATTLE — Editor's note: The above video is a preview of the Apple Cup, where both coaches from UW and WSU discuss the rivalry.

Jacob Eason threw for 244 yards and one touchdown and ran for another, Richard Newton added a pair of short touchdown runs, and the University of Washington kept possession of the Apple Cup for a seventh straight season after a 31-13 win over Washington State University on Friday.

Eason was excellent using his tight ends to pick apart Washington State’s defense in what could be his final home game after just one season with Washington. Eason seems destined for the NFL, the question is whether it will be after this season or if he’ll return for his senior year.

If this was it, he went out on a high note after Washington’s offense that staggered through its past two games scoring just 19 and 14 points against Oregon State and Colorado. Eason was 15-of-22 passing and his favorite targets were tight ends Hunter Bryant and Cade Otton, who combined for nine receptions for 142 yards. Eason also hit Terrell Bynum on a perfectly placed 16-yard TD pass and Eason added a 3-yard score on a QB sneak.

The seven straight wins are the longest in the series since the Huskies won eight between 1974-81. All seven have been by double-digits.

After three straight years where the Pac-12 North title was at stake for one or the other in the Apple Cup, this year’s clash had little buzz and no implications outside of potentially a slightly better bowl game assignment for the winner.

But the Huskies (7-5, 4-5 Pac-12) have relished in their ability to stymie the Air Raid offense of Mike Leach and did it again. Washington State was held 28 points under its season average and didn’t find the end zone after Max Borghi’s 1-yard TD run on the opening drive of the game.

Washington State quarterback Anthony Gordon — the leading passer in the country — threw for 308 yards on 48-of-62 passing, but nearly all his throws were underneath and the Cougars (6-6, 3-6) couldn’t stretch the field vertically against Washington’s secondary. He was held without a TD pass for the first time this season after entering with 45, including 11 in the past two.

Despite the offensive struggles, Washington State twice had a chance to pull within one score early in the fourth quarter. The most crushing was Deon McIntosh’s fumble at the Washington 10 with 12:57 remaining. The Huskies did nothing with the turnover, but Gordon made his worst decision of the day on the ensuing drive, throwing a careless pass while scrambling that was intercepted by Trent McDuffie.

Washington State scored on its opening possession, going 81 yards in 13 plays and capping the drive on Borghi’s 1-yard TD run. It was the first time the Cougars scored a touchdown in the first quarter against Washington since 2012.

Washington State: Gordon reached 5,000 yards passing for the season, the 16th time that’s happened in FBS history. He has 5,195 going into the Cougars’ bowl game. ... Borghi had just 50 yards rushing and the Cougars finished with 31 as a team.

Washington: The Huskies sacked Gordon five times after the Cougars had allowed just 13 all season. Joe Tryon had two sacks.

Washington State: The Cougars will wait a week to find out their bowl assignment.

Washington: The Huskies will wait to find out their bowl assignment.