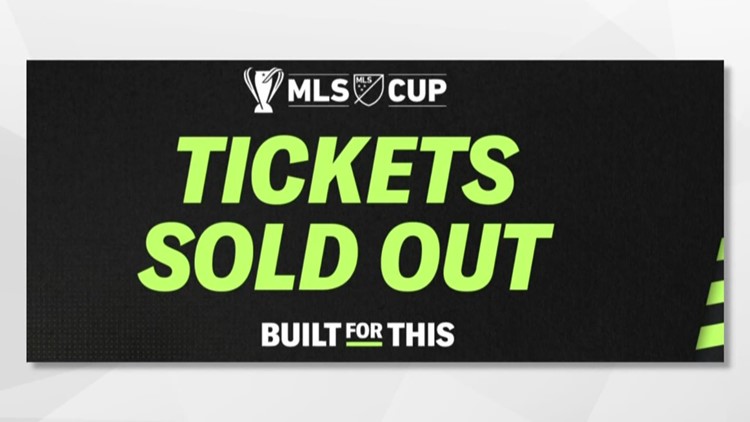 SEATTLE — The hottest ticket in Seattle sports sold out in just 20 minutes last week. This Sunday’s Major League Soccer Cup match at CenturyLink Field will be the most attended soccer game in the city’s history, according to the Seattle Sounders organization.

James Kimmel is one of the many Sounders fans who are on the hunt for tickets.

“A normal Sounders game is usually $15 or $20 a ticket to walk in the door, but this is not a normal Sounder’s game,” said Kimmel.

Since 2003, Kimmel’s ticket resale company Epic Seats has proven that there is always a way to get a ticket even if the event is “sold out.”

This weekend’s MLS Cup match proves to be a unique challenge.

The Sounders said more than 69,000 seats were sold in just 20 minutes. Roughly half of those seats went to season ticket holders who were allowed to purchase as many as six additional seats each.

Kimmel said a lot of those tickets are going right back on the market.

“A lot of the inventory being sold on the secondary [market] are additional seats being bought by season ticket holders. They offer them to friends and family, or maybe they have people in town, and as soon as they distributed all of those, then they put them on the secondary market,” Kimmel said.

Craigslist remains a resale favorite, but as always, Kimmel said you should be wary of ads that look to good to be true. Also, remember the Sounders use the SeatGeek.com for both first- and second-hand tickets.

While Sunday’s match may be sold out, Kimmel said there is still a chance for fans to go. They just have to be willing to pay up.

Many disappointed Sounders fans online claimed the sellout was too good to be true. KING 5 looked into this, and it turns out the Washington State Attorney General’s Office monitors ticket buying companies.

In fact, in 2018 a northeast-based ticket-buying company was fined $60,000 for using a “ticket bots” software to scoop up tickets in bulk for concerts and sporting events.

The Attorney General’s Office would not confirm nor deny any investigation into the MLS Cup sellout.