The Kraken and Starbucks will team up for the Kraken Community Iceplex, which will include the Starbucks siren on the three-rink community ice center. 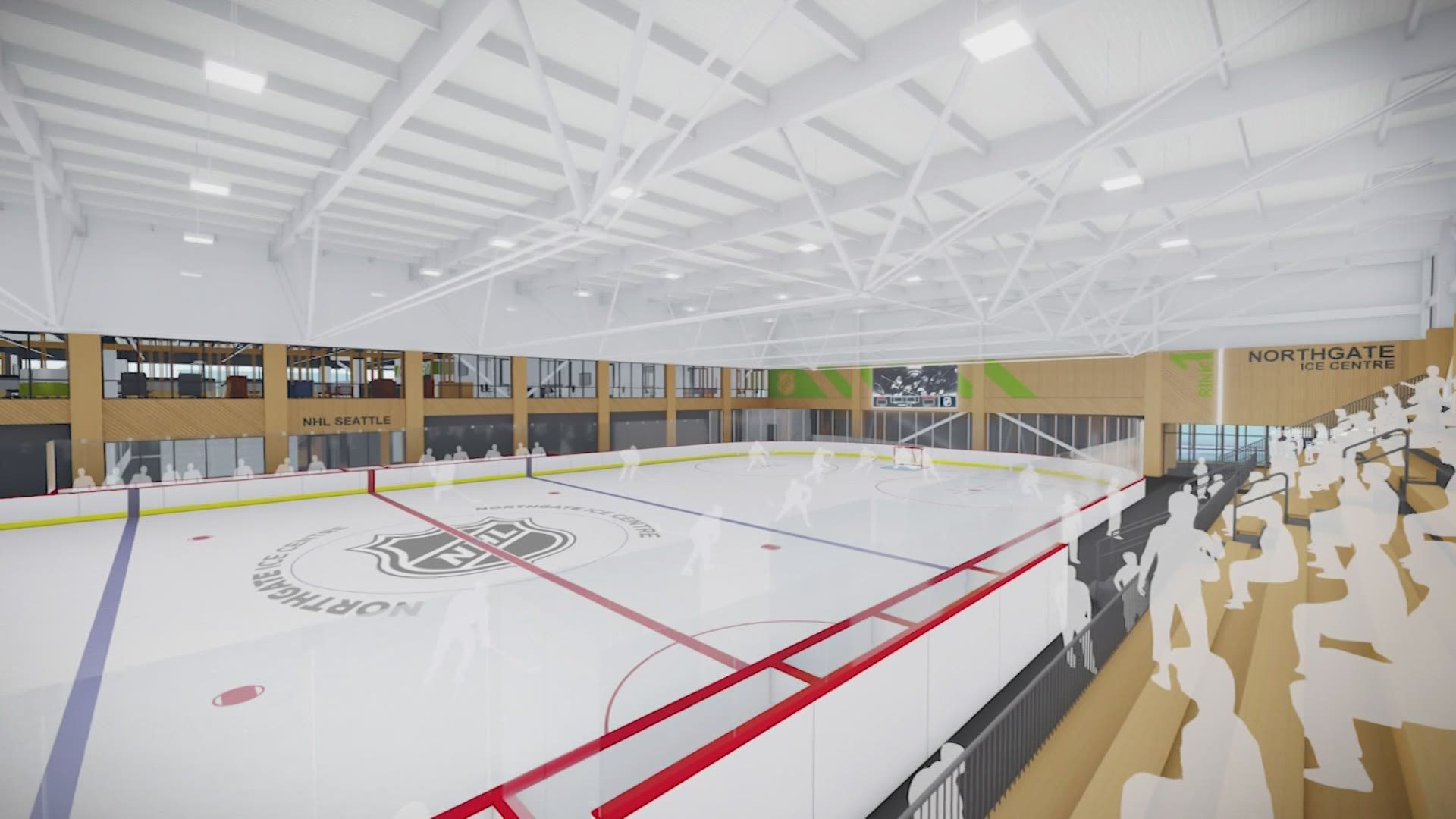 SEATTLE — There is a new name and opening date for the Seattle Kraken's team headquarters and training facility at Northgate.

It'll also have a Grande-sized assist from Starbucks.

On Wednesday morning, the Kraken and the Seattle-based coffee conglomerate announced a new deal for what will be called the Kraken Community Iceplex.

The multi-year "partnership" includes an initial $50,000 Starbucks grant to YouthCare to end youth homelessness as well as funding for new youth programs at the Iceplex to benefit the Washington Wild girls hockey program and programming for communities of color. The program will also provide 100 Kraken tickets to every home game to nonprofits, first responders and teachers.

Starbucks will also be the exclusive coffee provider at the Northgate facility and Climate Pledge Arena and will open its 21st community store inside the Iceplex. The Starbucks Siren will also be prominently displayed on the ice and in the venue.

"The things we want to do: diversity – very, very important to what we've done; super important to them," Kraken CEO Tod Leiweke said in an interview prior to the announcement. "Impacting kids who otherwise might not have a chance to play this sport, all the way to taking kids to actual Kraken games, and that's going to be a wonderful part of this program is actually every game we play there will be a section of people who come as our joint guests who have made a difference in the community."

The three-sheet facility, complete with a new restaurant, has been a key redevelopment of the old Northgate Mall site. When asked if IcePlex will be done in time for the start of Kraken training camp, Leiweke said unequivocally, "It will."

"The team will have access to the facility in early August," said Leiweke. "We anticipate opening to the public right after Labor Day. The 1,000 seats are being put in as we speak. So for our players to skate out on that ice there at the Kraken Community IcePlex for the first time, for me to look down and see the Starbucks logo and the ice next to our mark. This is pretty cool stuff."

In a statement, Camille Hymes, vice president of community impact at Starbucks, said, “Our Community Store and this partnership allow us to further invest in and amplify our impact here in the Seattle community through our shared, ongoing efforts to advance diversity, equity and inclusion in the communities in which we serve. Joining the Kraken team in community service and engagement opportunities, we look forward to working together to help bring access to resources and opportunity right here at home."

The Starbucks deal comes on the heels of similar Kraken announcements involving Seattle-based Alaska Airlines and Amazon, which both have naming rights deals at the new Climate Pledge Arena. Alaska paid for the rights to have their name on the south entrance to the new building, and Amazon paid millions for the right to slap "Climate Pledge" on the top.

When asked if Climate Pledge Arena would be done in time for that first game based on that timeline, Leiweke said yes.

"You have my word on it," Leiweke said. "There are 1,000 men or women working over there today. Pretty hot day that they haven't missed a beat. There's so many people that we're indebted to, but the men and women who are building both the Climate Pledge Arena and the Kraken Community IcePlex, it's amazing the dedication under difficult circumstances. Not just the heat [on Monday] but a global pandemic and haven't missed a beat. The facilities are going to open. They're going to be incredible and we couldn't be more excited."

Former Starbucks CEO Howard Schultz owned the Seattle Supersonics before selling the franchise to the group that eventually moved the team to Oklahoma City in 2008. There are many Seattle sports fans who have sworn off the company since, vowing to never have a cup of Starbucks until the Sonics returned.

When asked about the company's involvement now, Leiweke said, "that history really didn't come up. It was really about the future. It was about their commitment to their hometown."

"We're so aligned," he added. "We finish one another's sentences, and we're dreaming together on having a big impact."