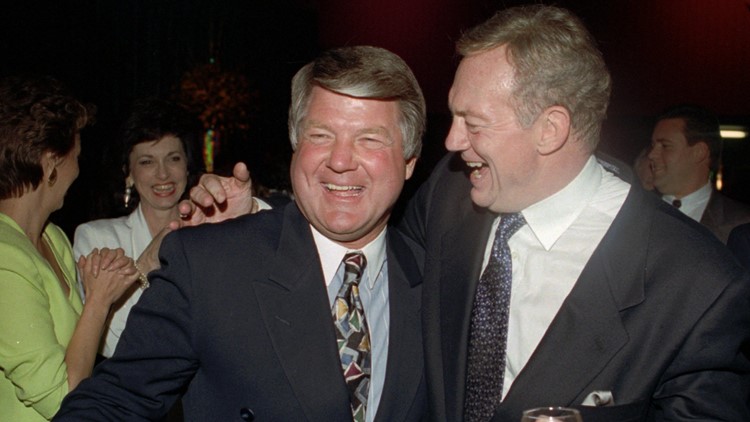 DALLAS — Updated at 9:31 p.m. with a quote from Dallas Cowboys owner and general manager Jerry Jones.

Each of the first two head coaches in Dallas Cowboys history will now reside in Canton, Ohio.

The announcement was made during halftime of the broadcast of the Green Bay Packers-Seattle Seahawks game, on the set of Johnson's Fox halftime show. Pro Football Hall of Fame president David Baker walked out on set, much like he did yesterday at CBS for former Steelers coach Bill Cowher, and bestowed the honor upon Johnson.

Dallas Cowboys owner and general manager Jerry Jones said in a statement Sunday night he was "so happy that the Hall of Fame recognized" Johnson:

“We’re so happy that the Hall of Fame has recognized Jimmy Johnson for what he is. A great coach. To Jimmy I say, ‘The stars were aligned and our dreams came true when we joined the Dallas Cowboys.’

“And on behalf of the Cowboys, and our fans all over the world, I say congratulations Jimmy. We’re proud of you.”

Johnson coached the Cowboys from 1989 until 1993, leading the organization at the outset of owner Jerry Jones' tenure.  The organization added talent like quarterback Troy Aikman, running back Emmitt Smith, and countless other effective draft picks through the leadership of Johnson.

Aikman, who was doing color commentary for the Fox telecast, was looking on as Johnson got the news, and appeared emotional watching his first professional coach get the news he is headed to Canton.

Johnson will go in as part of the Centennial Class, which is part of the league's celebration of its 100 years of existence.

Dallas' first head coach, Tom Landry, was inducted into the Pro Football Hall of Fame in 1990.