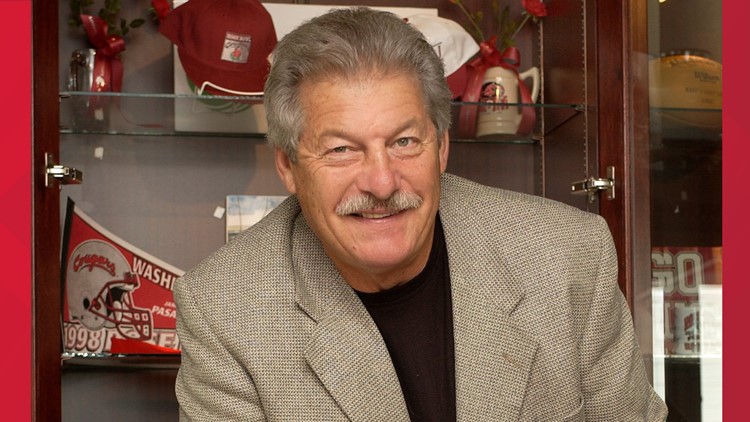 WSU football great Keith Lincoln, known as 'Moose of the Palouse,' dies at 80

Lincoln, who went on to have a remarkable professional career, died on Saturday at his home in Pullman.

Lincoln was a key member of the San Diego Chargers’ AFL teams in the 1960s, playing seven seasons. He earned All-AFL honors twice and is a member of the Chargers’ Hall of Fame.

During the 1963 AFL Championship game, Lincoln was recognized as the most outstanding player after amassing a record of 329 yards from scrimmage in leading San Diego to a 51-10 win over the Boston Patriots.

The win remains the city’s lone title in a major team sport.

“Everyone is aware of Keith’s many accomplishments on the field – including being named Most Outstanding Player of the 1963 AFL Championship game – but of all his football successes, he would tell you his biggest achievement was the near 60-year marriage to love of his life, Bonnie Jo,” wrote Chargers owner Dean Spanos.

Lincoln was traded to the Buffalo Bills in 1967 and made his final all-star team. He then spent part of the 1968 campaign with the Bills before returning to San Diego for the final appearance of his eight-year career.

Lincoln, affectionately known during his time at WSU as the “Moose of the Palouse,” was drafted in 1961. He was a triple-threat halfback for the Cougs in 1958-1960, setting a school career rushing record of 1,501 yards, single-season putting average record and a career punting average record.

Lincoln was an All-West Coast selection at halfback in 1959, a season in which he rushed for 670 yards, caught 11 passes for 182 yards and scored five touchdowns.

In 1995, Lincoln was named to WSU’s all-time Cougar team to commemorate the 100th anniversary of WSU football. He is also a member of the State of Washington and Inland Northwest Sports Halls of Fame.

"Keith served this university with tremendous pride, both as a student-athlete as well as his time leading our alumni association. Keith will be remembered fondly by Cougars everywhere and our thoughts are with his family at this time,” said WSU Director of Athletics Pat Chun.

Upon his retirement from professional football, Lincoln returned to Pullman where he served as the executive director of WSU's alumni association for more than 25 years before retiring in 2003.

Lincoln also served as an assistant coach for University of Idaho and the Cougars following his days in professional football.

Washington State Athletics and NFL.com staff contributed to this report.