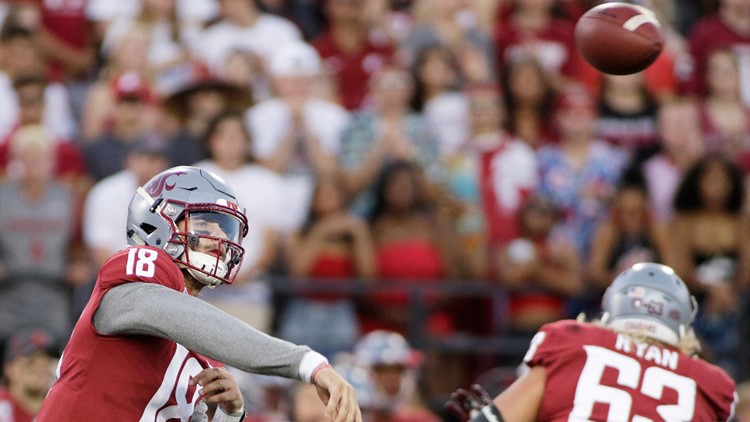 Gordon shines as No. 23 Washington State rolls to 58-7 win

PULLMAN, Wash. (AP) - Anthony Gordon completed his first 15 passes, threw for 330 yards and four touchdowns in the first half, and No. 23 Washington State rolled past New Mexico State 58-7 on Saturday night.

Gordon made his first college start memorable throwing touchdowns of 41, 48, 19 and 54 yards in the first half as the Cougars (1-0) built a 35-7 lead and coasted to an easy opening victory. Gordon finished 29 of 35 for 420 yards and five TD passes before checking out late in the third quarter.

Gordon, who had just five career passes coming into the season, beat out Eastern Washington transfer Gage Gubrud for the starting job with a stellar fall camp and his performance in camp continued into the start of the season. Gordon hit Rodrick Fisher on a 41-yard TD on the opening drive of the game and the passing onslaught was only getting started.

Gordon added a 48-yard catch-and-run TD to Dezmon Patmon, hit Easop Winston Jr. on a 19-yard score and capped his big half with a 54-yard touchdown toss to Travell Harris.

Gordon hit 22 of 23 passes in the first half. The only incompletion was a drop by Brandon Arconado midway through the second quarter.

Harris added a 20-yard touchdown reception in the third quarter, breaking a couple of tackles and traversing from one side of the field to the other to complete the run after catch.

Max Borghi added 128 yards rushing on 10 carries, including a 12-yard touchdown. Borghi became the first Washington State running back to rush for 100 yards since Gerard Wicks against California in 2016.

New Mexico State quarterback Josh Adkins scored on a 3-yard touchdown run in the first quarter when he recovered a fumble and took the loose ball into the end zone to tie the game at 7-7. That was the highlight of the night for the Aggies (0-1) who were limited to 317 total yards, a big chunk coming in the fourth quarter.

The night wasn't just about Gordon. Gubrud entered late in the third quarter and threw a 9-yard touchdown to Renard Bell. And, Trey Tinsley got some time in the fourth quarter going 1-of-3 passing in his limited action.

New Mexico State: The Aggies knew it was going to be a challenging start to the season beginning with the Cougars and No. 2 Alabama next week. New Mexico State must cut down on the miscues after committing three turnovers and was just 5 of 15 on third downs.

Washington State: Part of Gordon's big debut was distributing the wealth to his pass catchers. Ten Cougars caught at least one pass, showing the depth of Washington State's receiver group. Patmon led the way with seven catches for 103 yards.

New Mexico State: The Aggies travel to face No. 2 Alabama.