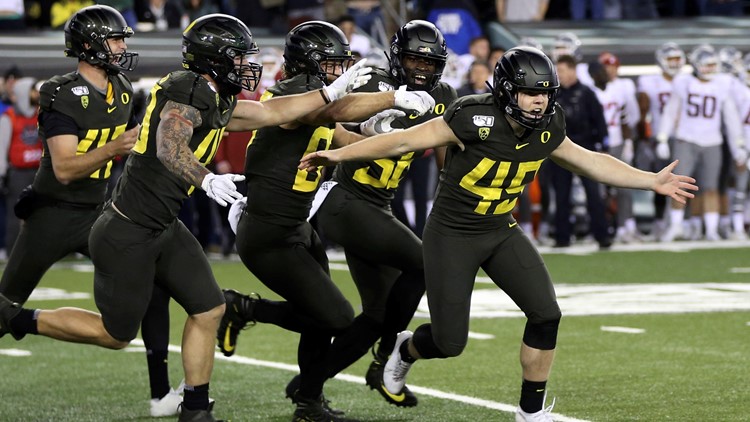 EUGENE, Ore. (AP) — Camden Lewis kicked a 26-yard field goal as time expired and No. 11 Oregon extended its winning streak to seven games with a 37-35 victory over Washington State on Saturday night.

CJ Verdell ran for a career-high 257 yards and three touchdowns for the Ducks (7-1, 5-0 Pac-12), who haven't lost since the season opener against Auburn.

Anthony Gordon's 5-yard touchdown pass on fourth down to Brandon Arconado with a minute remaining gave Washington State a 35-34 lead. But then Justin Herbert completed four straight passes on the ensuing drive to get the Ducks close for Lewis' kick.

Afterward, teammates picked up Lewis and held him high.

Gordon went into the game leading the nation in yards passing (425.9) and completions (35.14) per game. He has 32 touchdowns this season, including the four he threw last week in a 41-10 victory over Colorado.

Herbert threw for 222 yards but his streak of 35 straight games with a touchdown pass — the longest active run in the nation — was snapped. He threw for 280 yards and four touchdowns last week in a comeback victory over Washington to earn Pac-12 Offensive Player of the Week honors.

The Ducks were without senior linebacker Troy Dye, who broke his thumb last week against Washington. Dye has 351 career tackles, most among current Power 5 players, and has led the Ducks in tackles for three straight seasons. Dru Mathis started in his place.

The Cougars got to the Oregon 19 on their opening drive, but Gordon twice failed to connect with Rodrick Fisher and the team settled for Blake Mazza's 36-yard field goal.

Verdell ran untouched for an 89-yard touchdown to put the Ducks up 9-3 midway thought the first half. The extra point attempt by Lewis went wide right.

Gordon was intercepted in the end zone by Verone McKinley III, who snagged the ball when Arconado bobbled it. It was McKinley's third interception this season. But the Ducks failed to capitalize on the turnover.

Jevon Holland intercepted Gordon and ran it back for a touchdown, and the 2-point conversion was good to give the Ducks a 17-10 lead. The Cougars tied it with 47 seconds before the break when Gordon found Renard Bell with a 15-yard touchdown pass.

Verdell's 2-yard scoring run put Oregon back in front before Mazza's 23-yard field goal closed the gap to 24-20 going into the fourth quarter. Verdell added a 1-yard TD early in the period.

The Cougars trimmed the margin with Gordon's 19-yard pass to Arconado, and the conversion was good to make it 31-28.

Lewis made a 30-yard field goal with 6:29 left to give the Ducks some cushion, but a pass interference call and Gordon's 48-yard pass play to Tay Martin got the Cougars to the Oregon 12 with less than two minutes to go. On third-and-5, Gordon's pass to Arconado was incomplete, but Washington State went for it on fourth down and this time Arconado pulled down the TD.

Verdell's yards rushing were the most by a Pac-12 player in a conference game this season.

Washington State: Mazza has not missed a field goal this season. ... The Cougs got a scare in the first half when Borghi gingerly limped off the field after a 14-yard run, but he returned. Borghi's nine touchdowns this season were tied for second-most in the Pac-12.

Oregon: The Ducks have 14 interceptions this season. They went into the game leading the Pac-12. Holland has four of them. ... True freshman Mase Funa had his fourth sack of the season. ... Washington State's four-game winning streak over Oregon was the longest by a Pac-12 opponent since Washington won five straight meetings from 1989-93.

Washington State's Travion Brown was ejected for targeting on Oregon running back Travis Dye, who went to the locker room following the hit and did not return. Travis Dye is the younger brother of Troy Dye.

Oregon: Plays at USC next weekend.