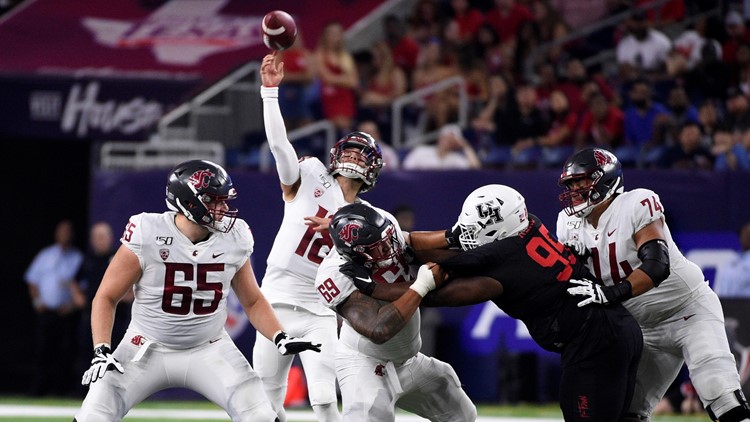 HOUSTON (AP) — Anthony Gordon threw for 440 yards and three touchdowns for his third straight 400-yard game as No. 20 Washington State pulled away in the second half to get a 31-24 win over Houston on Friday night.

Gordon threw a 7-yard touchdown pass in the fourth quarter and had two 39-yard scoring throws, including one in the third quarter that gave Washington State (3-0) the lead for good.

It was the first meeting as head coaches for Washington State's Mike Leach and Houston's Dana Holgorsen, who first met almost 30 years ago when Holgorsen played at Iowa Wesleyan, where Leach was an assistant.

The two coached together at both Valdosta State and Texas Tech and have remained close since that time, adding some familiarity to this game between teams meeting for just the fourth time.

D'Eriq King had 128 yards passing and a score and added 94 yards rushing and two touchdowns on a night Houston (1-2) led 14-7 at halftime. But Houston struggled to move the ball in the second half, lost two fumbles and didn't get in the end zone after halftime until King's 12-yard run with 2:21 left cut the lead to 31-24.

Brandon Arconado had nine receptions for 115 yards and Max Borghi added 61 yards receiving and ran for a touchdown in the third quarter to help Washington State to the victory.

Houston went for it on fourth-and-1 on its first drive of the second half and fumbled the snap. Washington State recovered and Borghi caught a 17-yard pass on the ensuing drive and tied it at 14-all with a 1-yard scoring run.

Gordon used a perfect throw to deposit the ball between two defenders to Dezmon Patmon for a 39-yard touchdown midway through the third to give Washington State its first lead of the game 21-14.

King looked to have scored on a 72-yard run late in the third quarter, but Jeremy Singleton was called for holding and it was brought back. Houston's drive stalled after that and the team had to punt.

There were about 11 minutes left when Houston got within 21-17 with a 42-yard field goal.

Another touchdown pass by Gordon, this one a 7-yard strike to Travell Harris, pushed Washington State's lead to 28-17 with about seven minutes remaining.

Houston took a 7-0 lead midway through the second quarter when King capped a 15-play, 82-yard drive with a 13-yard TD pass to Marquez Stevenson.

Washington State tied it up on the next drive when Easop Winston got in front of the defense to grab a 39-yard touchdown reception from Gordon.

King put Houston back on top 14-7 when he sneaked on from 1-yard out on the next drive. King has at least one TD pass and one scoring run in 14 straight games to tie the FBS record for consecutive games with a TD run and passing touchdown set by Tim Tebow.

Washington State put together a nice drive after that, but Gleson Sprewell made an acrobatic interception in the end zone to allow Houston to keep the lead heading into halftime. The play extended Houston's streak of games with a takeaway to 20, which is the longest active streak in the nation. It was also Houston's 103rd interception since 2013, which is the most in the country in that span.

These teams combined for 209 yards of penalties on Friday night, something they'll need to clean up before the two schools open conference play next week.

Washington State should maintain its spot in the poll after taking care of business against unranked Houston.