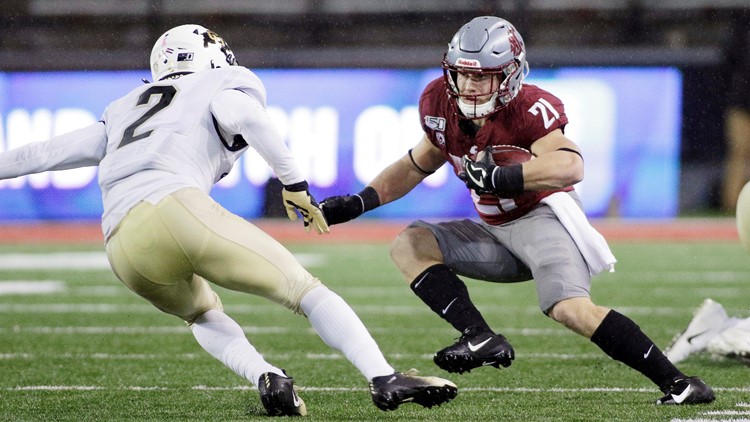 Photo by: AP
Washington State running back Max Borghi (21) runs while under pressure from Colorado safety Mikial Onu (2) during the second half of an NCAA college football game in Pullman, Wash., Saturday, Oct. 19, 2019. (AP Photo/Young Kwak)

Gordon threw a 4-yard TD pass to Max Borghi and a 22-yarder to Dezmon Patmon in the first quarter as the Cougars (4-3, 1-3 Pac-12) jumped to a 14-0 lead, scored touchdowns on their first three drives and cruised to a needed victory. Gordon was 35-of-51 passing and connected with eight different receivers.

The WSU defense was excellent after weeks of getting of getting shredded. Colorado was limited to 320 total yards and quarterback Steven Montez was intercepted twice.

Borghi was also outstanding on the ground, rushing for 105 yards, including a 47-yard touchdown run late in the first quarter that gave the Cougars a 21-3 lead.

But Gordon responded with a 44-yard TD pass to Brandon Arconado and hit Tay Martin for a 1-yard TD early in the fourth quarter.

Washington State: The Cougars were giving up 47.7 points per game in conference play, but didn't allow Colorado out of its own territory on seven of its final nine drives. The Buffaloes have five drives of three plays or less.

Washington State: The Cougars travel to No. 12 Oregon next Saturday.