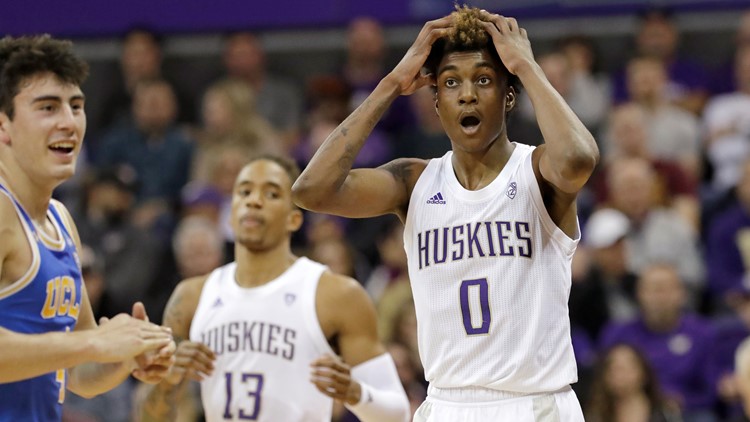 Photo by: AP
Washington's Jaden McDaniels (0) reacts after being called for a foul against UCLA's Jaime Jaquez Jr., left, in the first half of an NCAA college basketball game Thursday, Jan. 2, 2020, in Seattle. (AP Photo/Elaine Thompson)

Jake Kyman hit seven 3-pointers and scored a career-high 21 points off the bench, the last coming with 8 seconds left to give UCLA a 66-64 win over Washington in the Pac-12 Conference opener for both teams.

The Huskies used a 17-4 run to start the second half to take a lead.  There were 15 lead changes in the game.

Kyman was left alone on the wing and nailed his final 3 of the game moments after Nahziah Carter had knocked down a 3-pointer to give Washington the lead.

Kyman had scored 18 total points in nine games this season. All 12 of his shot attempts were 3-pointers and was critical in UCLA snapping a three-game losing streak.

Freshman Jaden McDaniels fouled out of the game with over 16 minutes left in the second half.  McDaniels picked up his fourth foul from the bench in the first half.  The ref called a technical foul on him while he was sitting with three fouls.

After the game, coach Mike Hopkins says that McDaniels needs to be better because they need him for more than 13 minutes.

The Huskies will host USC on Sunday.