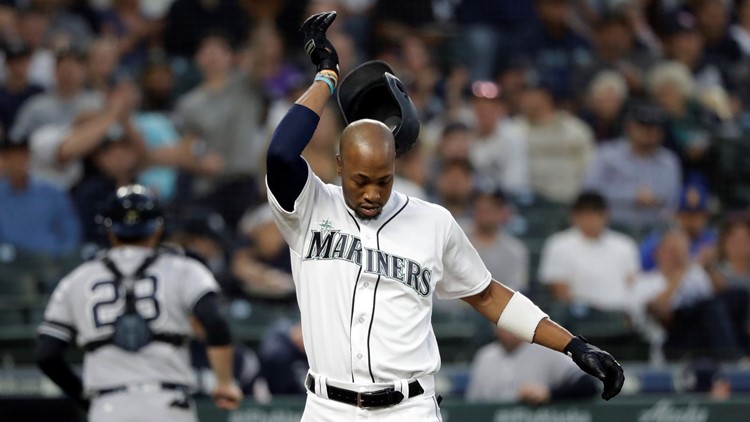 Photo by: AP
Seattle Mariners' Keon Broxton, foreground, knocks his helmet off after striking out looking as New York Yankees catcher Austin Romine, back left, heads to the dugout in the second inning of a baseball game Monday, Aug. 26, 2019, in Seattle. (AP Photo/Elaine Thompson)

Torres launched his 33rd homer of the season on the first pitch of the second inning from Tommy Milone, who took over after Matt Wisler was used as an opener. It was the start of a four-run rally for New York in which 10 batters came to the plate. Austin Romine had an RBI single and Ford added the big blow with a two-run shot down the right field line.

Ford, previously a Rule 5 pick by the Mariners and later returned to the Yankees, added a solo homer in the fourth, his eighth of the season. The three home runs boosted the Yankees' total to 64 in August, a major league record for any month.

New York starter J.A. Happ permitted just three hits, but a high pitch count ended his night after five innings. One of the hits was a three-run homer by Dylan Moore, his second long ball in two days. Happ (11-8) struck out seven and walked three.

Mallex Smith added a solo shot in the seventh off reliever Nestor Cortes Jr., his first homer since June 16. But the Yankees' bullpen was otherwise solid. Tommy Kahnle worked a perfect eighth and Aroldis Chapman pitched the ninth for his 36th save.

Yankees: SS Didi Gregorius sat out a day after getting hit by a pitch in the right shoulder. Manager Aaron Boone said Gregorius was sore but the hope was he would return to the lineup Tuesday. ... OF Cameron Maybin was also out as he's been dealing with a sore left wrist. ... OF-DH Giancarlo Stanton, sidelined since late June with a knee injury, has been doing agility work and could hit on the field during the series in Seattle. Boone was hopeful Stanton could start rehab games by the end of this week.

Mariners: RHP Brandon Brennan threw a bullpen as he continues to work back from a shoulder strain. Brennan likely won't rejoin the team until after rosters expand in September.

Seattle RF Keon Broxton was ejected by plate umpire Manny Gonzalez after striking out looking in the second inning. Broxton threw his bat down, flipped his helmet off and threw one of his batting gloves behind him after a disputed third strike call. The batting glove appeared to hit Gonzalez, and Broxton was immediately ejected for the first time in his career.

It's a matchup of Japanese stars as Masahiro Tanaka starts for the Yankees and Yusei Kikuchi returns to the rotation for the Mariners. Tanaka (9-7, 4.68 ERA) has won two of his past three decisions but lost his last start against Oakland. Kikuchi (5-8, 5.19) is coming off a two-hitter against Toronto on Aug. 18.