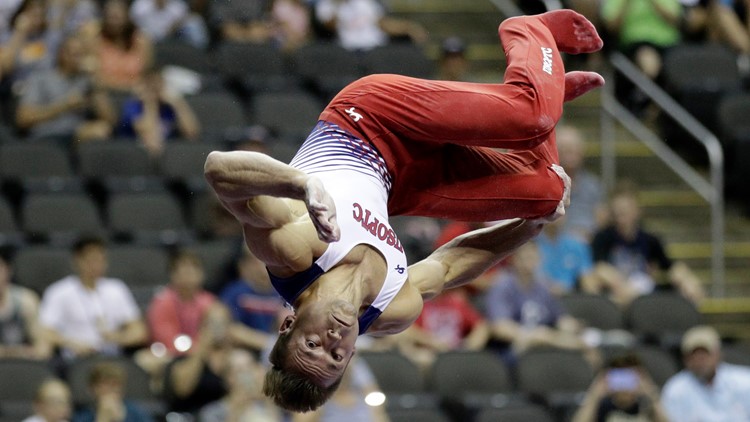 Photo by: AP
CORRECTS SPELLING TO MIKULAK, INSTEAD OF MUKULAK - Sam Mikulak completes on the parallel bars during the U.S. Gymnastics Championships on Thursday, Aug. 8, 2019, in Kansas City, Mo. (AP Photo/Charlie Riedel)

KANSAS CITY, Mo. (AP) - Sam Mikulak cruised to his sixth national title at the U.S. men's gymnastics championships Saturday night, though the picture behind the two-time Olympian remains murky with less than a year to go before the 2020 Olympics.

Mikulak promised he wouldn't play it safe even after staking himself to a sizable lead after the opening night on Thursday. He wasn't kidding. He ramped up the difficulty on his high bar set, a necessity next summer if he wants to bring home his first Olympic medal after coming home without one in 2012 and 2016.

The lack of any Olympic hardware is the lone hole in Mikulak's otherwise stuffed resume. He remains adamant that he believes his best years are ahead of him. It certainly looks like a possibility after he captured gold in high bar, parallel bars, pommel horse and floor exercise and completed 12 routines over the course of two days without a fall. His winning margin was the highest of his modern-era record six national championships. No wonder he's hinting at extending his career beyond Tokyo and hasn't ruled out competing into his 30s.

Maybe by then American men will have someone ready to pick up the mantle.

The program is in the midst of a generational shift. Mikulak is the lone member of the 2016 Olympic team who hasn't retired, though alternates Modi and Donnell Whittenburg are still in the mix. Mikulak lamented the lack of competition for the top spot on Thursday, admitting he wishes there was someone nipping at his heels.

For the moment, there isn't, though the men put on a considerably better show than they did during a sloppy opening night. Eight of the top 10 all-around finishers put up better all-around scores on Saturday.

Moldauer, who won the national title in 2017 while Mikulak was still recovering from an Achilles injury, overcame a messy high bar routine to hold on to second by drilling his floor exercise. Modi stuck his vault to finish on the podium. Whittenburg, who has been dogged by injuries for much of the last four years, finished third on still rings - his signature event - and seventh in the all-around despite being at what he described at "80%."

Shane Wiskus made a spectacular save on high bar, blindly snatching it one-handed following a release that was a little too big. Rather than smashing onto the mat, he kept going to help propel him to a fourth-place finish.

The world championship team will be selected next month, and the selection committee will have plenty to sort through. Several athletes in the mix are dealing with injuries. Colin Van Wicklen sat out due to a concussion he sustained during warm-ups on Thursday. Alec Yoder withdrew due to a strained shoulder. Moldauer and Whittenburg are banged up.

The only question surrounding Mikulak is whether he can keep the momentum going. Healthy for an extended period for the first time in his elite career, Mikulak now appears to be gaining the mental toughness he's lacked at times, when mental mistakes would cost him valuable points on the big stage. Those mistakes vanished during two sublime performances that cemented his status as the most decorated men's gymnast of his generation.