Nick Taylor at Kirkland's Juanita High School has become one of the top pitchers in Washington state and he's done it all despite a rare challenge. 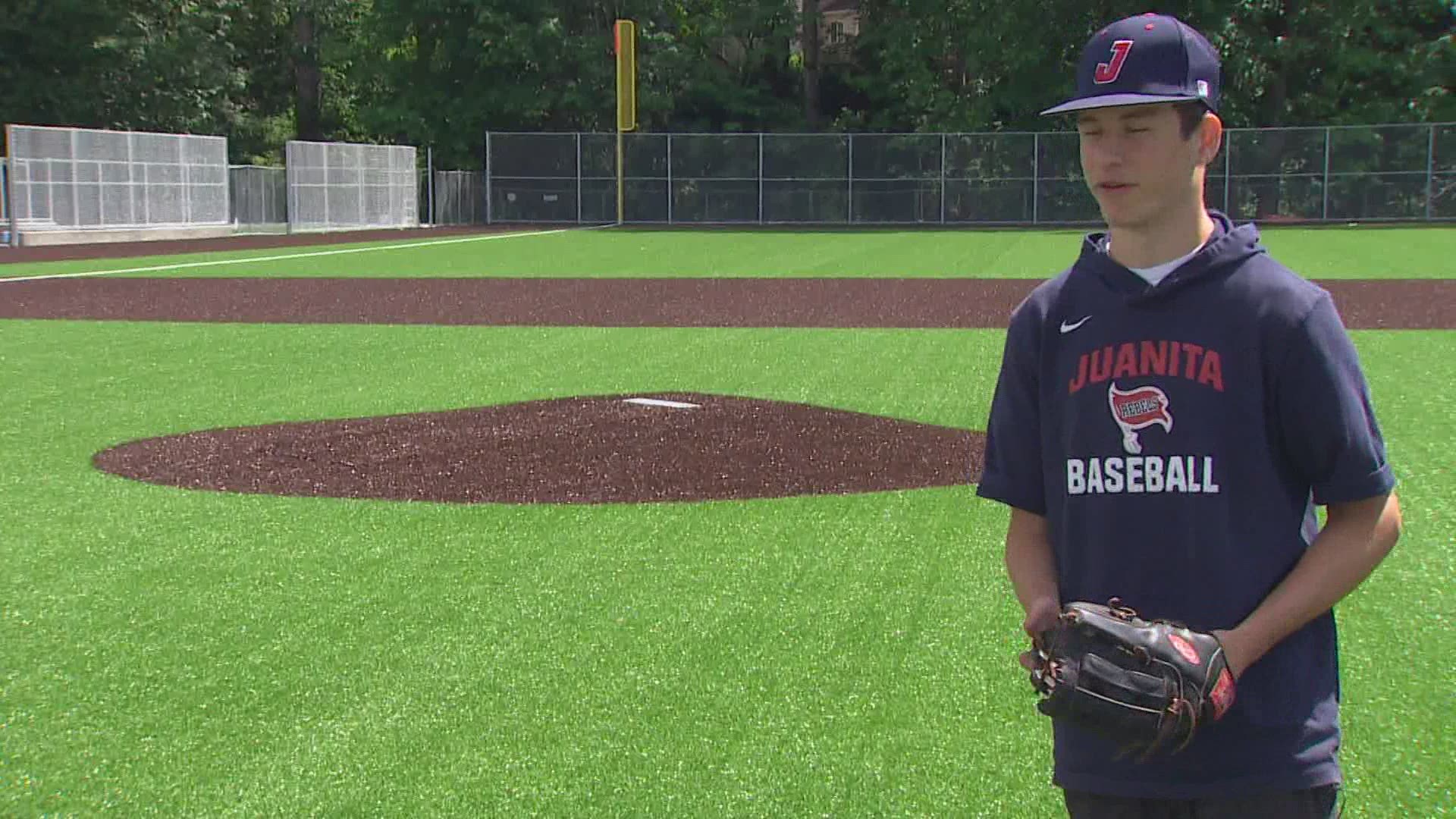 KIRKLAND, Wash. — Nick Taylor will play his final baseball game for Juanita High School on Friday and then plans to play in college. Nick has become one of the top high school pitchers in Washington state and has done it all despite a rare challenge.

Nick was born with a deformed right arm. His arm ends about where his wrist should be.

"It was just a birth defect, I think it happens in about one in every 10,000-20,000 times," explained Nick's dad, Mark Taylor. "You know, obviously nothing that anybody could do, but if you've never gone through it before it's a major shock, you know. Our biggest fear then is, is he going to be accepted by society that was probably it."

Nick’s parents wouldn’t let the defect slow him down, he was already playing football, soccer and basketball at the age of four, but it was baseball where he’d find his passion.

“Baseball just kind of came naturally to me, when I was little, I just fell in love with the sport and this is definitely not going to stop me, I’m going to persevere,” said Nick.

When Nick was 5-years-old, he had trouble catching the ball, so his dad had him watch videos of Angels pitcher Jim Abbott, who also had a deformed arm.

“That was the motivation for me, someone out there can do it, 'look Nick, we can do this.' That’s all he had to see, a couple of videos and he said, 'I got it,' that’s his famous words, 'I got it,'" said Mark.

“If I didn't learn that, there's a good chance I fold a couple years later, probably, alright I can’t do, if I did not sit down and figure out what to do, then who knows, I might not be playing," said Nick.

Nick does it so smoothly now, most people don't realize what's happening.

"A lot of kids will come up to me after games, 'hey good game,' and then I don't shake their hand and they won't know; I remember in little league a lot of kids on my team wouldn’t know that I had my hand until the end of the year party when we were eating cupcakes. There's no reason to like think that anything is special, like I'm just out there, I'm just another guy on the mound," said Nick

Nick earned eight varsity letters at Juanita High School and he also played for the Ravens basketball and football teams.

Nick was one of the many proud graduates during the Juanita High School graduation ceremony at T-Mobile Park Wednesday night. He graduated with a 3.5 GPA and will play baseball in college next year, continuing to show that perseverance pays off.

"Just persevere through it, I mean, everyone's born with their, their different quirks and everything or different setbacks and you just have to grind through it, find what works best for you," said Nick.