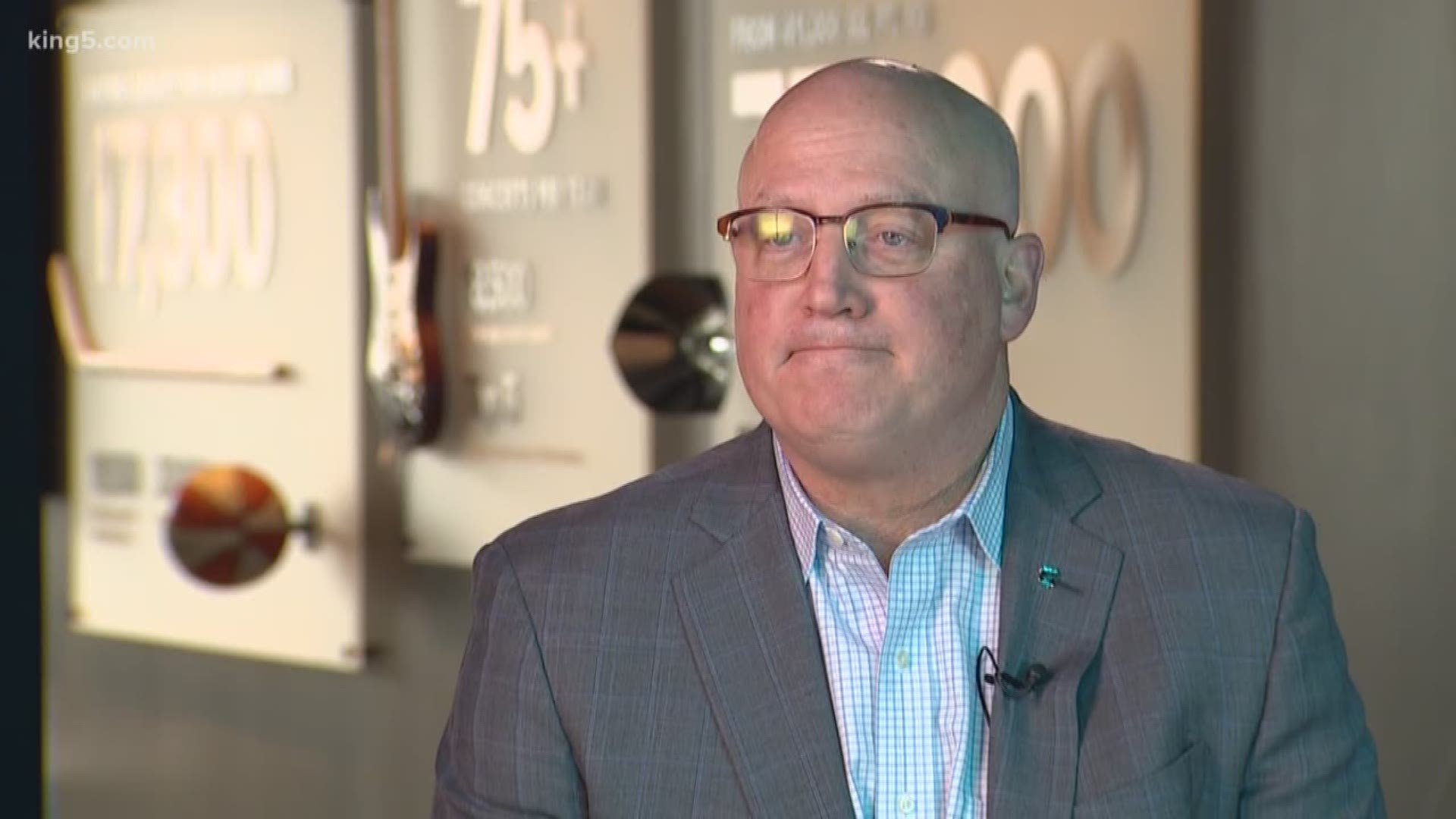 SEATTLE — The NHL’s deputy commissioner is not concerned about the New Arena construction timeline at Seattle Center, but dropped hints about other announcements during a brief stop in Seattle Friday.

“It’s a very impressive project. I’m going to be thrilled to watch as they continue to make progress,” said Bill Daly during an interview at the Seattle Center.

Daly, along with NHL Commissioner Gary Bettman, have been very involved getting regular updates from the Seattle NHL franchise, which is scheduled to begin in 2021.

Interior demolition began Friday on the old KeyArena building, and sound walls have been built on the west side of the $930 million project to serve as a sound buffer to neighboring buildings.

NHL Seattle CEO Tod Leiweke is now targeting June 1, 2021 for a competition date. Would this be good enough for the NHL to award Seattle an NHL draft?

“It's something we would definitely consider, and we've told the club that," Daly said. "Obviously it is going to depend on the completion schedule. They're aware of those difficulties. We're going to have to make that decision well in advance of June of '21, but certainly it's a consideration right now.”

He continued, “For that event – if they're not going to get it that year for whatever reason, it won't be long. You obviously can't recreate an expansion draft, but to have an NHL event, like the NHL draft, that will happen.”

Daly also said there is no determination on whether the team will be called the Sockeyes, Steelheads, Sasquatch, Kraken, Metropolitans, or some other name.

“It's primarily driven by ownership," Daly said. "Obviously we have approval rights, but we're certainly going to defer to the ownership group. I know they're going through a pretty intense process with trying to narrow that issue down.”

Is anything off the table? Bettman signaled at the team announcement last year, that he wasn’t too fond of Metropolitans, which was the name of Seattle's pro hockey team in 1917 that won the first Stanley Cup.

“What Gary pointed out is that would pose a little bit of a conflict with some of the names we utilize in the league," Daly said. "I don't think there is anything out of bounds necessarily.”

The franchise is also still finalizing plans for the Northgate training facility and team headquarters, as well as an American Hockey League affiliate. There have been indications the NHL Seattle group will also be an owner of the AHL franchise. The AHL Board of Governors meets Monday in Chicago, but the league office won’t say if Seattle is on the agenda.

“(We’re) aware of what they're working on in respect to an AHL affiliate – sounds like it would be a 'great fit' if it comes together,” said Daly, and the announcement could come soon.

“The AHL affiliate issue is one of those issues they'd like to get done and checked, right up front, which I think is very smart,” he said.

But don’t expect it next week.

Daly, who is in town to participate in a panel on concussions, also talked about the impact on his league.

“We have a rule, a fairly broad rule about checks to the head already,” said Daly. “We think the physicality of our game is important, and maintaining the physicality of our game, and we don't wanna adopt a rule that is too broad where really head contact is secondary and incidental to an otherwise legal body check. That's kind of what we're trying to straddle right now.”

“The culture of our game is a lot safer today than it was 10-15 years ago," he continued. "The players have been educated, understand the risks associated with playing a physical game and potentially having concussions.”

Could that mean one day eliminating fighting from the game?

“Fighting is kind of evolving itself out of the game,” he said. “Eighty-five percent of games were fight free this year, lowest incident of fighting in our league since pre-expansion, since pre '67. You don’t see staged fights anymore.”

There has also been interest in bringing professional women’s hockey to Seattle, including a group that has put together a formal website to make its case. However, a Canadian league folded, and the U.S. league was dealt a blow this week when its stars announced they will boycott the league over pay and health care. Could the NHL step in at some point like the NBA did to help bring the WNBA and the Seattle Storm on board?

“We're very supportive of the concept of professional women's hockey. We want to give elite level women hockey players an opportunity to earn a living, at the professional level or at least professional hockey, so we're supportive of those efforts. How it all plays out and whether it is something that ultimately we will have to undertake to kind of help launch in a more meaningful way, is something I guess we're see. We certainly don't want to interfere with the current landscape, so we're, at this point interested bystanders,” said Daly.

“That’s the thought process. Obviously we'd have to give a lot of thought on how to structure that, and make it worthwhile for the athletes who are playing, and the ownership that would be participating. I can't say we're very far down that road.”