Tumwater tight ends Ryan Otton and Austin Terry have their eyes on another state football title. 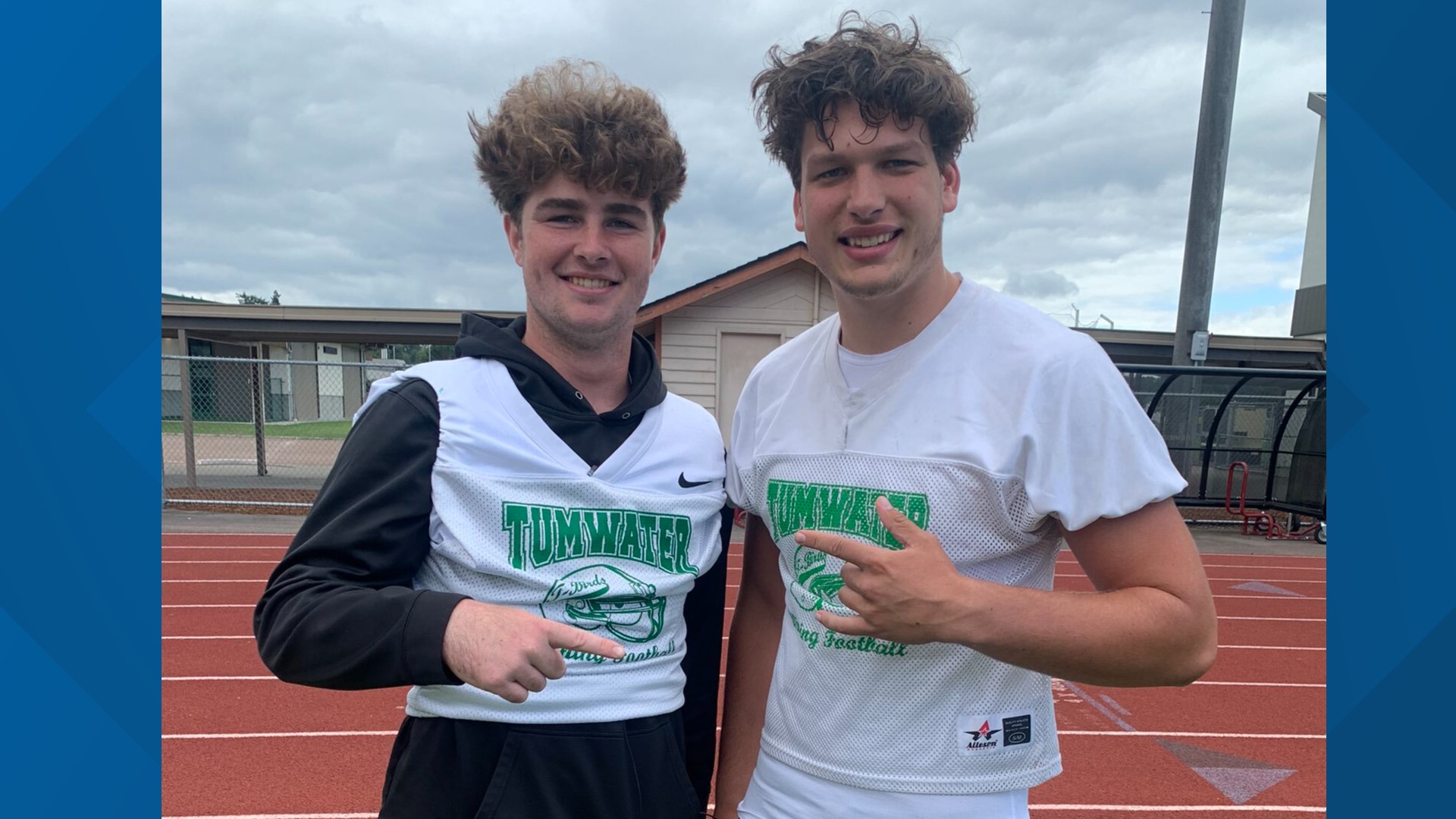 TUMWATER, Wash. — Ryan Otton and Austin Terry are two of the best high school tight ends in Washington state, and they both play for Tumwater High School.

Otton is a senior, and he’s been around Tumwater football since he was born. His grandfather Sid coached the Thunderbirds for 43 years, his dad Tim is the defensive coordinator and his big brother Cade is now a senior for the Huskies.

“There’s a lot of pressure running on my back,” Otton said. “You know, there's a lot to live up to, but you know I kind of keep that in the back of my mind. I just want to go out here, do what I love to do, play some football.”

Rivals.com ranks Otton as one of the top five tight ends in the country. The 6-foot-6, 240-pound tight end can catch, block and he’s also big on making a name for himself.

“He’s established himself as Ryan and not Cade’s brother and not John's grandson or his dad's son,” Tumwater football coach Bill Beattie. “He's really done a great job of making a niche that he's Ryan Otton, and I think that is a tough thing to do, too, when you follow such fantastic individuals, and he's done a great job at doing that. I don't know where the ceiling is on him, because he's still growing. He's still filling out.”

Otton also gets pushed every day at practice from fellow tight end Terry.

Terry is a 6-foot-5, 235-pound senior who’s been playing varsity since he was a freshman.

"It's very rare that you have kind of what we have here, but at the same time, as Ryan was saying, we learn off each other a ton," said Terry.

Terry is a nationally ranked tight end, who also plays on the defensive line

“I'm really thankful you know for being a part of this program and what it's done for me and for everyone else here,” said Terry.

“Probably the thing that makes him so good is the amount of time he dedicates to getting prepared,” Beattie said. “He knows. He knows the game of football. He knows where he needs to get on routes. He spent a ton of time or working on his blocking and…I've seen the stories of our tight ends here. You know the one thing they come out of here being able to do is know how to block.”

Both tight ends are also pretty good in the classroom. Terry has a 3.7 GPA, and Otton has a 3.8 GPA.

Tumwater could arguably have the best duo of tight ends in Washington state history, but Otton and Terry don’t get caught up on rankings.

“Just keep my head on to just not letting it get to me and just kind of overall just enjoying it, because I found once it becomes more of a job and you stop enjoying it, then it's not fun,” Terry said. “And I've just made sure to always have fun with it and it helps play free too.”

Next year Otton will play for Washington and Terry is headed to Boise State, but right now they're only focused on trying to win another state title for Tumwater.

“For right now the big thing is winning the state championship here and kind of heading off right,” Terry said. “It's an exciting year this year because I know everything will happen super fast, but you know enjoy joy you can.”

Tumwater will open their season Sept. 3 at home against Enumclaw.